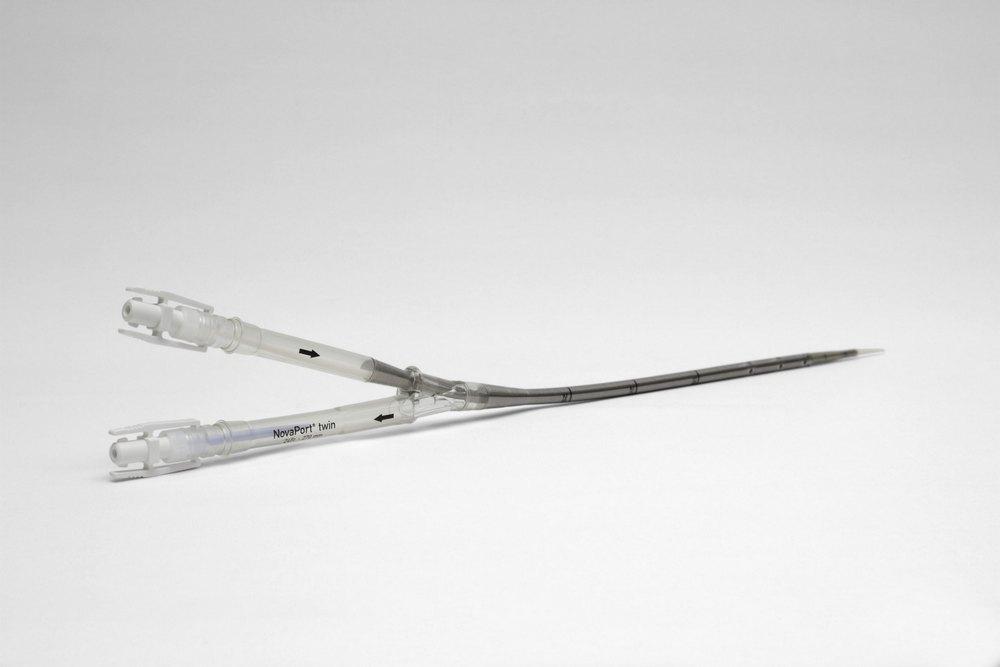 Novalung adds the unique double-lumen cannula to its expanding portfolio of products for the extrapulmonary treatment of lung failure. Now only a single cannula is required instead of two.Novalung announced today that it has received approval for the new NovaPort twin® double-lumen cannula, which is now available for clinical use. The NovaPort® twin cannula was specifically designed for veno-venous vascular access for the iLA activve® system - the Allrounder for extrapulmonary lung support. The iLA activve® system can now be applied more rapidly, since cannulation with the NovaPort® twin only requires a single vein rather than the two vessels previously needed. Blood is drawn from the patient and - after passing through the iLA Membrane Ventilator® - returned to the body through the same cannula, which consists of two separate lumens. The NovaPort® twin cannula enables the use of the jugular vein in the patient’s neck, rather than requiring femoral vessels in the groin, and thus supports the therapeutic goal of mobilizing the patient early on while treatment with the iLA activve® continues. Patient positioning and mobilisation procedures with the NovaPort® twin cannula will be familiar to nurses and physicians alike from treating hemofiltration patients. Dr. med. Georg Matheis, Managing Director of Novalung GmbH, explained: “Physicians and nurses will be able to respond to the individual patient’s therapeutic needs, regardless of whether he or she is lying in bed, sitting up or even starting to take a few steps.“Novalung’s NovaPort® cannulas are known for their minimal flow resistance and excellent anti-kinking characteristics due to the high-flex design, while remaining extremely flexible. NovaPort® twin cannulas are introduced percutaneously using the familiar Seldinger technique. The integrated single-step dilator is especially gentle on the vessel walls. Since its inception Novalung has focussed on „Made in Germany“ to maintain the high quality of its products.Background informationObjective: replacing the invasive mechanical ventilationNovalung‘s mission is the creation of new Solutions for Lung Failure using artificial lungs that breathe for the patient outside the body. Instead of placing patients in an artificial coma so that they can tolerate mechanical ventilation, Novalung products enable the patients to experience their treatment while awake, mobile and breathing easily. The innovative technologies open the door for physicians and nurses to this vision. The overall objective is to replace damaging invasive mechanical ventilation.iLA activve®: all-rounder for lung support Therapy objective with iLA activve® is, to support patients with lung failure while being awake and mobile instead of placing them into an artificial coma, ventilate them mechanically and to further damage the lung. The iLA activve® is a further step towards replacing invasive mechanical ventilationThe iLA activve® system has been specifically configured so that all necessary components are mounted on an easily movable trolley. Furthermore the iLA Membrane Ventilator® and the iLA activve® pump are height-adjustable via a quick-release handle so that physicians and nursing staff can easily react to the patient’s individual needs depending on whether the patient wants to lie in bed, sit up or even go a few steps.Diverse patients and diverse types of lung support place different demands on an optimal lung support. To cover all individual needs with one therapeutic system, the iLA activve® has been developed as a flexible all-rounder. The veno-venous iLA activve® system covers the full range of respiratory support: from highly effective carbon dioxide elimination to complete oxygenation.Novalung GmbH Founded in 2003, the German company Novalung GmbH operates on a highly international level in order to establish new solutions for lung failure. These advanced technologies from Germany and the U.S. were brought into the company and developed further. From the outset Novalung has focused on high-quality development and production “Made in Germany“. Cutting-edge technologies are employed in Novalung’s medtech production facility in the manufacture in particular of the iLA Membrane Ventilator® and NovaPort® vascular access cannulas, both of which have been used to help treat thousands of patients.The privately funded Novalung GmbH is a fast growing medical technology company based in the area of Heilbronn/Germany and with a subsidiary on the campus of the University of Michigan in Ann Arbor, USA.Mrs Franziska Preissing Head of Marketing franziska.preissing@novalung.com Tel.: +49 7131 27 06 130 Fax: +49 7131 27 06 230 Novalung GmbH Im Zukunftspark 1 74076 Heilbronn Germanywww.novalung.com/media

You can edit or delete your press release NovaPort twin, the Newest Double-Lumen Cannula, Approved here

03-17-2011 | Health & Medicine
Novalung GmbH
Novalung receives CE mark for iLA activve®
Novalung receives CE mark for iLA activve® With the new all-rounder for extrapulmonary lung support Novalung GmbH is the only company worldwide offering the complete portfolio for both pumpless and pump-driven lung support. Novalung announces receiving CE mark approval for their new pump-driven iLA activve® lung support system. It will be launched in Europe with immediate effect. Respiratory support with iLA activve® enables a treatment environment with awake, mobile patients instead
01-25-2011 | Health & Medicine
Novalung GmbH
Novalung and Medos start cooperation
Due to the acquisition of Medos Medizintechnik AG by the private equity fund Zukunftsfonds Heilbronn (“Future Fund of Heilbronn”) the company will cooperate closely in the future with Novalung GmbH, which is expected to strengthen both medical device companies. The Zukunftsfonds Heilbronn (zfhn) announced that it has acquired Medos Medizintechnik AG from Ventizz Capital Partners Advisory AG. The purchase agreement was signed on January 7, 2011. With this
01-12-2011 | Industry, Real Estate & Constr …
Novalung GmbH
Josef Bogenschuetz joins Novalung as Managing Director
Novalung GmbH prepares for further growth with former Maquet CEO. As of January 1, 2011, Josef Bogenschütz and Dr. Georg Matheis are joint Managing Directors of Novalung GmbH. Bogenschütz will be specifically responsible for Research & Development, Manufacturing, Quality Management and Finance. This addition underscores the company’s focus on the ongoing and efficient expansion of its portfolio of innovative products designed to replace invasive mechanical ventilation. Nicholas L. Strout remains responsible
04-21-2009 | Health & Medicine
Novalung GmbH
Novalung signs Carestream Medical, Inc., as exclusive distributor in Canada
Company intensifies its North American marketing activities to meet increasing demand in the Canadian market Novalung GmbH, the German manufacturer of the innovative iLA Membrane Ventilator® for extrapulmonary lung support, is pleased to announce that it has appointed Carestream Medical, Inc., as its exclusive distributor in Canada. “Carestream is uniquely positioned to represent our products in the Canadian market”, said Dr. Georg Matheis, CEO of Novalung. “With their highly skilled team
02-11-2009 | Health & Medicine
Novalung GmbH
Presentation of latest clinical data: Invitation to the scientific symposium
During the 19th Bremer Symposium of Intensive Care latest clinical user data of the iLA Membrane Ventilator® will be presented. These data enable new therapy chances for acute and chronic pulmonary patients. From 18th till 20th February 2009 the 19th Symposium of Intensive Care will take place in Bremen, Germany. We would like to turn your special attention to the symposium “Perspectives beyond protective ventilation” which will take place on Friday,
02-11-2009 | Health & Medicine
Novalung GmbH
Novalung Academy moved
Collaboration of the Novalung Academy and the University Hospital Frankfurt will be intensified After the successful relocation of the Novalung headquarters in summer 2008 to Talheim/Germany, the Novalung Academy now also moved from Offenbach to Talheim. Due to the relocation the Novalung Academy is able to intensify its cooperation with the University Hospital Frankfurt. So the theoretical part of the course “protective ventilation strategies” will take place in the congress center “Hoffmanns-Höfe”
Comments about openPR
I can't but agree to the positive statements about your portal: easy to use, clear layout, very good search function, and quick editing!
Jens O'Brien, Borgmeier Media Communication