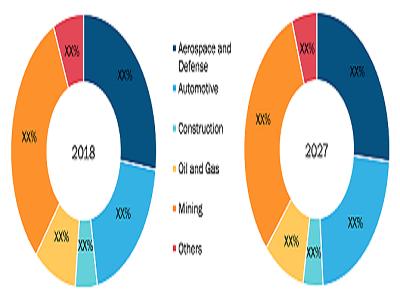 According to the new research report published by The Insight Partners, titled “Robotic Refueling System Market - Global Analysis and Forecast to 2027”, the global robotic refueling system market is expected to reach US$ 194.0 Mn in 2027, registering a CAGR of 39.1% during the forecast period 2019-2027.A robotic fueling system has the advantage of preventing human contact with potentially dangerous fumes, avoiding driver’s exposure to extreme hot or cold temperatures during fueling, and reducing the labor costs associated with full service fueling stations. A robotic fueling system consists of five main subsystems: control system which include user interface, processor, and logic schema; sensor system for vehicle positioning and identification, robotic arm, fuel dispensing nozzle, and the fuel port interface.Download PDF Brochure @ http://bit.ly/35g2Rf4The major companies operating in the market include Scott, KUKA, Fanuc, Fuelmatics, Neste, Rotec Engineering, Gazprom Neft, Mine Energy Solutions, Plug Power, Inc., and Shaw Development LLC among others.The main focus of robotic fuelling is to explore improvements over existing systems (manual) mainly by cost reduction (personnel cost) through automation. Simplification in robotic fueling can be achieved by the redesign of the vehicle positioning and fuel dispensing systems. The global robotic refueling system market has been witnessing robust growth due to factors such as Low cost of operation and flexibility of dispensing different fuels, adoption of this system by the mining industry owing to cost, flexibility, safety and increased productivity of mining operations. No requirement for operators on-site to man fuel stations and refuel vehicles is considered to the major driving factor for the robotic fueling systems remarkable growth rate during the forecast period from 2019 - 2027The robotic refueling system market has been derived from market trends and revenue generation factors from five different regions across the globe namely; North America, Europe, Asia Pacific, MEA, and SAM regions. The North America region holds the highest market share. Technological advancements in North America have led to a highly competitive market. It also attracts several technological developments, involving economically robust countries.In recent times, vehicles entering a robotic refueling station are generally controlled by humans. Nonetheless, autonomous driving utilizing prescriptive or predictive analytics would leave human drivers redundant and make driving even more reasonable and safer operations. With the advent of autonomous vehicles, the vehicle would be directed by humans to enter a fuelling station. However, with the addition of artificial intelligence (AI) coupled with autonomous driving will extend beyond independent drive, and it will also aid in autonomous ongoing refueling operations, which will decipher the current issue of manually instructing the car for refueling and negate the need for human intervention. With the advent of level 5 autonomous vehicle coupled with AL, a vehicle on its own can enter a robotic fuel pump for refueling when the fuel level drops below the threshold level. Additionally, in the mining industry, autonomous trucks can stop at a containerized fuel station for the purpose of refueling without the intervention of human. Additionally, the concept of swarm intelligence (SI) is expected to allow the collaboration of multiple autonomous vehicles in the industry to take collective action of refueling when needed.The robotic refueling system market is segmented on the basis of fuel type into gaseous fuel, gasoline, diesel and others. The market based on component is segmented into hardware and software. Majority of vehicles running on the road are running mostly on gasoline owing to their less emission of exhaust gasses as compared to diesel. Thus gasoline held the highest market share in the year 2018 among the fuel type segment. Among the component segment, sub segment hardware segment include various sensors and systems such as vehicle positioning system, control system, robotic arm, fuel dispensing system and sensors such as position sensors and proximity. Hardware segment consists of more components which are much higher in price than the software segment. Thus, hardware held the largest market share in terms of revenue. Hardware also needs replacing in the event of damage or faulty operation, however, a software can be tweaked without incurring much cost.Inquiry Before Buying @ http://bit.ly/2Mr0ihBThe report segments the global robotic refueling system market as follows:Global Robotic Refueling System market - By ComponentHardware Software Global Robotic Refueling System Market - By FuelGaseous Fuel Gasoline Diesel Others Global Robotic Refueling System Market - By Industry VerticalAerospace & Defense Automotive Construction Oil & Gas Mining OthersBuy Now This Report @ http://bit.ly/2ouN6QXAbout Us: The Insight Partners is a one stop industry research provider of actionable intelligence. We help our clients in getting solutions to their research requirements through our syndicated and consulting research services. We are a specialist in Technology, Semiconductors, Healthcare, Manufacturing, Automotive and Defense.Contact Us: Call: +1-646-491-9876 Email: sales@theinsightpartners.com

You can edit or delete your press release Robotic Refueling System Market Latest Trends, Demand and Advancement 2019 to 2027 here

06-04-2020 | IT, New Media & Software
The Insight Partners
Neuromorphic Computing Market: Year 2020-2027 and its detail analysis by Focusin …
A Professional Survey done by The Insight partners has formulated a report titled "Neuromorphic Computing Market", which instills a crisp idea of the influential aspects affecting the growth of the market. It gives the new entrants a clear idea of all the business strategies incorporated by the key players, which is helping them regulate their trade success. It serves a reliable business tool helping the reader to understand the global
06-04-2020 | IT, New Media & Software
The Insight Partners
Data Center Construction Market of North America During 2020 to 2027 | Get Free …
Exponential growth in the data as a result of digital transformation has led to increased demand for edge computing. This rise in edge computing has further resulted in rapid growth in the array of smaller data centers that are built closer to the population centers as the edge computing processes, data, and services in closer proximity of the end-user, its demand in a smaller emerging market are projected to grow
06-04-2020 | Health & Medicine
The Insight Partners
Biggest Innovation In Sleeping Bruxism Treatment Market 2020: Covid-19 Impact An …
The Insight Partners’ report on the Sleeping Bruxism Treatment market aims at developing a better understanding of the Sleeping Bruxism Treatment industry through qualitative and quantitative analysis of the key market parameters. The report also giving a broad view of the major market developments, key market initiatives, and ongoing market trends during the forecast period. The Sleeping Bruxism Treatment market is anticipated to grow in the forecast, owing to the factors
06-04-2020 | Industry, Real Estate & Constr …
The Insight Partners
Membrane Water Treatment Chemicals Market – Global Outlook and Forecast to 202 …
A membrane is a barrier that allows selective things such as molecules, ions and other small particles to pass through, but restricts the rest. Water treatment membranes are sheets made from materials that separate contaminants as per their size or charge. Membrane water treatment systems are used to clean surface, ground and wastewater to make the water fir for consumption and industrial purposes. Chemical is a distinct compound or substance