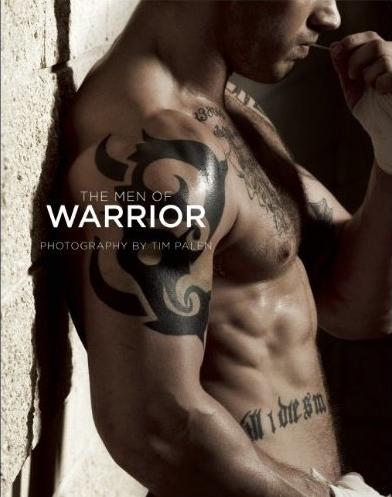 The Men of Warrior

Lionsgate and publisher Insight Editions are thrilled to announce “The Men Of Warrior.” Featuring fine art portraits by acclaimed photographer Tim Palen, the book is a companion to the highly anticipated film WARRIOR, which will be in theaters everywhere on September 9, 2011.

“The Men Of Warrior” features stunning photographs of the actors and fighters featured in the film, including Tom Hardy, who also wrote the book’s foreword, Joel Edgerton, Erik Apple, Nate Marquardt, and Ron “RJ” Messenger. In its pages, Hardy and Edgerton show off their hard-earned fighting bodies and bloodied upper lips, capturing the tough and dramatic world of WARRIOR in a series of iconic images, all of which are poster-worthy.

The 128 page book will be on shelves at brick and mortar book sellers nationwide beginning one month before the film’s release, on August 9th, and is currently available for pre-sale on Amazon, Borders, and Barnes & Noble’s websites.

Haunted by a tragic past, Marine Tommy Conlon (Hardy) returns home for the first time in fourteen years to enlist the help of his father (Nick Nolte) to train for Sparta, the biggest winner-takes-all event in mixed martial arts history. A former wrestling prodigy, Tommy blazes a path toward the championship while his brother, Brendan (Edgerton), an ex-fighter-turned teacher, returns to the ring in a desperate bid to save his family from financial ruin. But when Brendan’s unlikely, underdog rise sets him on a collision course with the unstoppable Tommy, the two brothers must finally confront each other and the forces that pulled them apart, facing off in the most soaring, soul stirring, and unforgettable climax that must be seen to be believed.

Tim Palen is an American photographer and Lionsgate’s Chief Marketing Officer. Palen’s photography has appeared in Premiere, Paper, Vibe, Redbook, Penthouse, The New York Observer, The New Yorker, and Flaunt magazines. Palen’s photography for movie posters has garnered several Hollywood Reporter Key Art Awards. He was named by Entertainment Weekly as one of the "50 Smartest People in Hollywood," as well as making Fast Company's 2011 list of the 100 Most Creative People in Business. He is a member of the Academy of Motion Picture Arts and Sciences and lives in Los Angeles.

Palen is known throughout the movie marketing industry for his daring approaches to film promotion, most specifically his provocative one-sheet posters, many featuring his own photography. Examples of his work include the arresting imagery used to promote the SAW and HOSTEL horror franchises, and the iconic portraits he created on behalf of W, PRECIOUS, and FOR COLORED GIRLS. As Paula Burr has written, Palen’s movie poster photography attempts “to boil [the image] down to the essence of the film. It is all about finding simplicity, a singular iconic image, something that evokes emotion.”

11-02-2018 | Fashion, Lifestyle, Trends
War Paint
War Paint Makeup For Men Launches
Start-up brand War Paint is due to re-launch its new range of makeup designed specifically for men. The brand offers a range of 4 core products; Foundation, Concealer, Bronzer, and Tinted Moisturiser, their products are available in 5 shades ranging from Fair to Dark. With the growth in makeup for men in recent years and the increasing demand for cosmetic and skincare products. War Paint despite being less than a year
05-22-2018 | Health & Medicine
Harley Body Clinic
VASER Liposuction For Men: Is It Effective?
What Experts Say According to few reports and surgeons, the entire procedures in men are quite different than those performed in women. A woman physically tends to gain more fat around their areas of their hips, thighs and stomach, whereas in men, the fat tends to accumulate in the areas of chest, abdominals and love handles. Since of the high density of fat deposits in these areas, the results are
07-07-2017 | Business, Economy, Finances, B …
ANTORINI
ANTORINI Luxurious Designer Briefcases & Bags For Men
The exclusive ANTORINI men’s briefcases are the best coming from the shops of Italian craftsmen. If you appreciate quality, then do not hesitate to view new ANTORINI collection. You will be highly impressed by the beauty of perfect men's briefcases, bags and other fine products. Executive Leather Briefcase A superb manager’s briefcase of the highest quality, made from the best leathers. The inside is divided into two large compartments (supplemented with pockets
06-20-2017 | Fashion, Lifestyle, Trends
kbvresearch
Global Men Formal Shoes Market Estimation
According to a new report Global Men Formal Shoes Market (2016-2022), published by KBV Research, the global Men Formal Shoes Market is expected to attain a market size of $9.5billion by 2022, growing at a CAGR of 7% during the forecast period. The Oxford Shoe market dominated the Global Men Formal Shoe Market by Shoe Type in 2015, and would continue to be a dominant market till 2022. The Boots Shoe
07-11-2011 | Fashion, Lifestyle, Trends
Stanley Lewis
Stanley Lewis Introduces Designer Scarves for Men
Stanley Lewis, a leading designer label for men’s accessories has introduced a new range of designer scarves for men guaranteed to impress. Men’s scarves have never looked better, using only the finest Italian silk, wool and linen, the Stanley Lewis collection of cool designer scarves have raised the bar in chic dressing. Says Anne Harding, Co-founder, Stanley Lewis, “Our design philosophy is based on the belief that every man needs to
05-20-2008 | Media & Telecommunications
Octan Media Pvt. Ltd.
Free Online Men's Magazine
Setting up a milestone in the field of media and Journalism, Octanmen is a team of young and talented writers, editors, and other immensely talented professionals and personalities from different media backgrounds. Well versed with their writings; Octanmen offers and can easily make out the wants of men all over. The team, with their rich experiences, strives hard to put before our readers the kind of stuff they want to
Comments about openPR
OpenPR is clearly structured and remains true to its principle of confining itself to the essential parts. OpenPR has proven to be a very good and reliable partner to our media agency: Within the shortest time the releases are online and go down well with the media representatives. The success of OpenPR is reflected in the steadily increasing number of press releases. It is good that OpenPR exists!
Ursula Koslik, Director Marketing & PR, F+W Hamburg