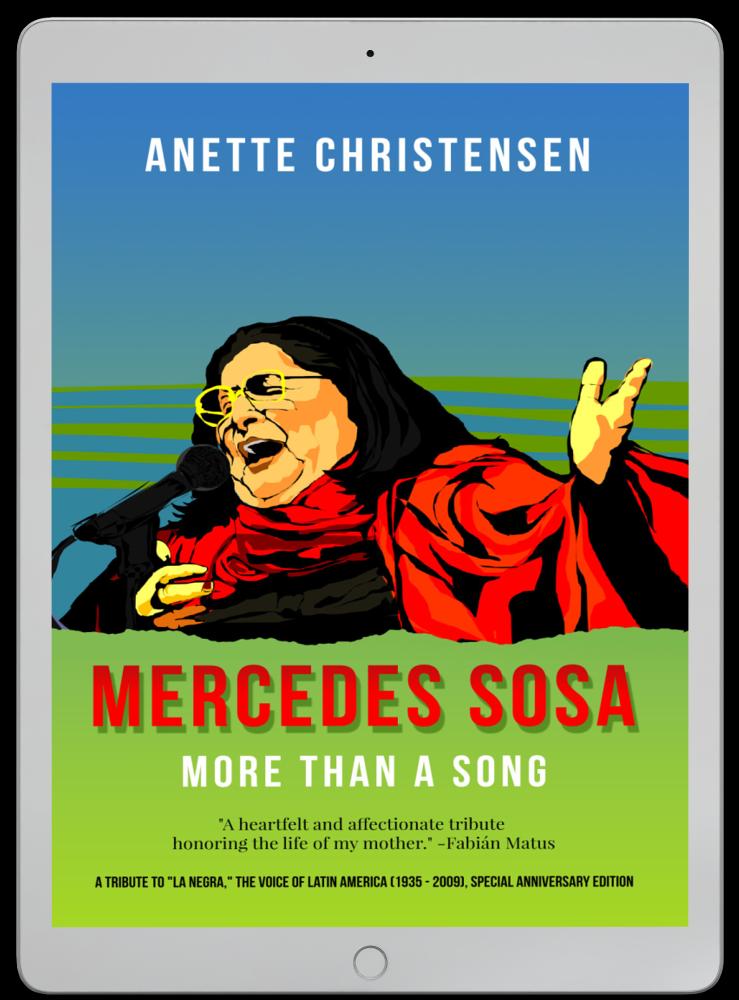 London - October 4, 20019. To mark the 10th anniversary of Mercedes Sosa’s death, Danish author, Anette Christensen, has published the first biography in English about the Argentine singer and activist. Mercedes Sosa was one of the most recognized artists in international music, and collaborated with musicians ranging from Luciano Pavarotti, Sting and Joan Baez. Blacklisted as being one the most dangerous people to the regime in Argentina in the 1970s, she became the underground reference point for the poor and oppressed, and an icon of democracy who fought South America’s dictators with her voice. Anette Christensen first heard about Mercedes Sosa on October 4, 2009, when her death was announced on the news. Even so, the encounter with Mercedes Sosa changed the author's life and Christensen has immersed herself into Sosa's life and music ever since. Mercedes Sosa – More than a Song, reveals how a girl raised in a poor Indian working class family sang her way to influence and explores the secret behind Sosa’s remarkable impact and captivating charisma which her fans often referred to as a “mystical presence.” Christensen draws a psychological profile that reveals how Sosa’s upbringing, political circumstances and personal tragedies formed her life and her career. “Mercedes Sosa was a world-class performer, whose influence went far beyond the borders of music. On a personal level her life shows that it is possible to bounce back from afflictions as a more resilient and authentic person. On a social level Sosa awakens us and revolutionizes our hearts and our conscience and inspires us to become better people who want to make this world a better and more just place for everyone. Her integrity, courage and solidarity make her a role model who points out the path to a more emphatic and compassionate world. It makes her more relevant than ever.” Christensen says. Nicknamed, “The Voice of the Voiceless”, Sosa emerged as a legend in Latin America, but remained an unsung hero in the English speaking world, where it is her version of “Gracias a la Vida” that comes to mind when her name is mentioned. The lack of information in English motivated the author to write and publish this biography. Mercedes Sosa – More than a Song is a product of Christensen’s research and observations over the past decade. Christensen has been in contact with Sosa’s family, friends and fans and included some of their stories."A new and touching perspective on our beloved Mercedes. It is a heartfelt and affectionate tribute honoring the life of my mother.”-Fabián Matus, son of Mercedes Sosa and president of The Mercedes Sosa Foundation.Mercedes Sosa – More than a Song is available worldwide in English and Spanish from all major online stores such as Amazon, Book Depository, Barnes & Noble and many more. It can also be purchased from physical bookstores in the US, UK, Canada, Spain, Germany, Austria and Switzerland. Find all the stores at www.mercedes-sosa.comMetadata Title: Mercedes Sosa – More than a Song Subtitle: A tribute to “La Negra,” the voice of Latin America (1935-2009) Author: Anette Christensen Publisher: Tribute2Life Publishing Date of Publishing: October 4, 2019 Genre: Non fiction: Biography: Women, Music, History, Social Activism, Latin America, True Stories of Survival and Heroism Pages: 156 Photos: 8 photos/5 sketches by the author Price: eBook 6.95$/ Paperback 12.95$ ISBN English eBook: 978-87-998216-6-2 ISBN English Paperback: 978-87-998216-7-9 ISBN Spanish eBook: 978-87-998216-3-1 ISBN Spanish paperback: 978-87-998216-9-3 ISBN Spanish paperback in all Spanish bookstores: 978-84132658-7-2 Abridged 10th anniversary edition of the original title, Mercedes Sosa, The Voice of HopeMembers of the press can receive a free copy to review on request.Contact Anette for an interview or more information about her book.Contact Information: www.mercedes-sosa.com www.Facebook/AnetteChristensenAuthor.com mercedessosa1935@gmail.comTribute2Life Publishing Porsvænget 18 7400 Herning mercedessosa1935@gmail.comTribute2Life Publishing wants to create and publish books about Mercedes Sosa in many different languages. At the moment two books are out in English and Spanish. A Turkish version is in the pipeline.

You can edit or delete your press release Ten years after Mercedes Sosa’s death, her legacy still shines here

10-06-2020 | Business, Economy, Finances, B …
QY Research, Inc
Freeze Dried Corn Market Size, Statistics, Share, Trends And Forecast 2025 By To …
In a recent study published by QY Research, titled Global Freeze Dried Corn Market Research Report, analysts offer an in-depth analysis of the global Freeze Dried Corn market. The study analyzes the various aspects of the market by studying its historic and forecast data. The research report provides a Porters five force model, SWOT analysis, and PESTEL analysis of the Freeze Dried Corn market. The different areas covered in the
12-10-2018 | Arts & Culture
The Authors Show
Book Marketing Announcements: The Authors Show Lineup For The Week Of December 1 …
Don McCauley of the Free Publicity Focus Group and Danielle Hampson, Executive Producer of The Authors Show, founders of The Authors Marketing Powerhouse, have announced The Authors Show radio and broadcast schedule for the week of December 10, 2018. The new show schedule is available at the Authors Show site. For those who hope to sell books on the Internet, the challenge can be daunting. It can be confusing difficult, time
05-08-2017 | IT, New Media & Software
Orbis Research
Global 3D Printers Market to grow at a Outstanding CAGR of 35.08% during the per …
Description Explore the Latest– Global 3D Printers Market Research Report The Following Companies as the Key Players in the Global 3D Printers Market: 3D Systems, EnvisionTEC, ExOne, and Stratasys. Other Prominent Vendors in the market are: EOS, Matsuura Machinery, Shaanxi Hengtong Intelligent Machine, Ultimaker, voxeljet, and Wuhan Binhu Mechanical & Electrical. Commenting on the report, “One trend in market is growing use of bioprinting by the healthcare sector. The capability of 3D printers
03-13-2017 | Leisure, Entertainment, Miscel …
Rich Girl Productions
NBC’s ‘Superstore’ Actor Dominic Pace Joins The Cast Of Two New Projects
(Los Angeles,Ca March 13th) Actor Dominic Pace has joined the cast of the upcoming Fan Film, Overwatch: Heart of Numbani starting production March 15th. Pace will play one of the leads Reaper/Reyes. The film also stars Dina Freberg as Tracer, and Anthony Gros as Junkrat. The film is set in the world of Blizzard Entertainment's smash hit game, Overwatch, game of the year at the 2016 Game Developers
09-05-2013 | Industry, Real Estate & Constr …
MST Corporation
MST – Mechatronics System Technology, Leader in the Field of Environmental Ins …
MST, Mechatronics System Technology, is a leader in the field of environmental instrumentation. MST develops and provides instruments and control solutions to control the environment in industrial settings. Their instruments and control technology takes a leading role in the environmental instrumentation, such as refrigerating and air conditioning, clean room, pharmaceutical manufacturing, foods, and more, which requires a high degree of expertise and product reliability. MST Corporation has developed instrumentation
07-29-2011 | Industry, Real Estate & Constr …
Billinglsey Company
Furniture Marketing Group Relocates To Billingsley Company’s International Bus …
Billingsley Company today announced the relocation of Furniture Marketing Group (FMG) from 6200 Tennyson Parkway to Billingsley’s International Business Park. FMG is expected to move into its new offices at 6100 W. Plano Parkway later this year. Furniture Marketing Group, a total office solutions provider, will occupy approximately 17,000 sq. ft. according to Trevor Franke, principal, Peloton Commercial Real Estate. Franke, who brokered the 10-year lease agreement, says the new office
Comments about openPR
We publish our press releases on openPR.de because we like people who are "open" - just like us.
Frank Obels, CEO, INCONET - Informationssysteme, Communication und Netzwerkberatung GmbH