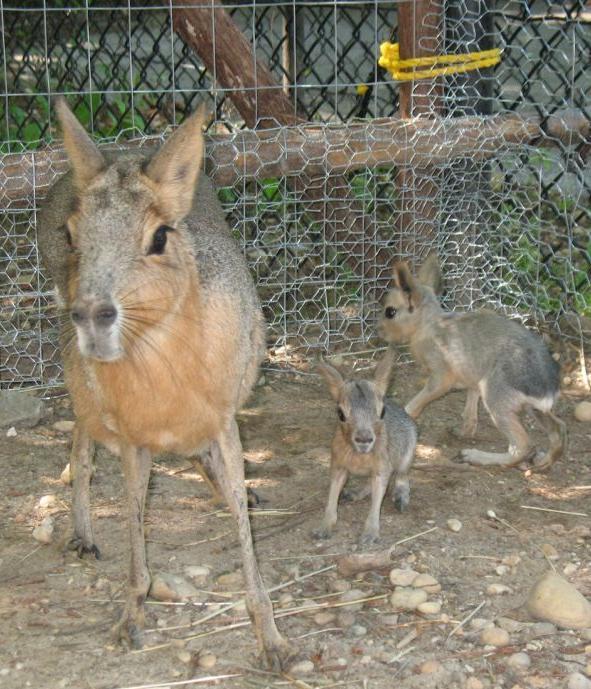 The two Patagonian cavy babies (shown with their mother) were born July 1.

Manorville, NY — In celebrating the births of two Patagonian cavies recently, the Long Island Game Farm is giving one lucky child a chance to win a prize pack in its Patagonian cavy naming contest. The winner receives a family season pass, a T-shirt and a basket of goodies, courtesy of the Game Farm.On July 1, one of the Patagonian cavies gave birth to two babies at the Game Farm. The Patagonian cavy is the third largest rodent (behind the capybara and the beaver) with a height of two feet, a length of two feet and a weight of 35 pounds. It looks like a cross between a rabbit and a kangaroo, with its hind legs that are slightly larger than the front, a long face, large eyes and slightly pointed ears. It has four toes on its front feet and three on the back; all toes are equipped with a sharp claw.The Patagonian cavy can walk on all fours, hop like a rabbit and even bounce up and down. When startled, the cavy can leap six feet straight up and can run as fast as 35 miles per hour. Native to the pampas of central and southern Argentina, the Patagonian cavy prefers arid grasslands and brushlands with plenty of open space. They communicate with each other through grunts, grumbles and screams.“We love to have the children and the community help us to name these lovely animals,” said Melinda Novak, Co-Owner, Long Island Game Farm. “I encourage all children who have never visited the Game Farm before to enter the contest.” The deadline is July 31. Children can mail their entries to: Long Island Game Farm, P.O. Box 97, Manorville, NY 11949. For more information, call (631) 878-6644 or visit www.longislandgamefarm.com.* Photo is attached and available upon request.The Long Island Game Farm was founded in 1970 by Stanley and Diane Novak and is located on 25 acres of land in Manorville. The Park has grown over the years and has served as a frequent destination of school children that have grown up on Long Island. Each year, thousands of guests visit the park.Hank Russell, Public Relations Director The Public Relations and Marketing Group 156 North Ocean Avenue Patchogue, NY 11772 (631) 207-1057 hrussell@theprmg.com

10-07-2011 | Fashion, Lifestyle, Trends
Greenloons LLC
Family Eco-Vacation Trailblazer Greenloons Identifies Top 10 Emerging Destinatio …
Vienna, VA, Oct. 6, 2011 – The business of eco trailblazer Greenloons greenloons.com/ is to help travelers source the green vacation of their dreams – one that’s been certified sustainable. Irene Lane, Greenloons founder, suggests 10 emerging eco destinations as the next “best bets” to take folks off the sometimes beaten green path. “Traveling sustainably in new destinations,” Lane said, “helps raise living standards and can create environmental reverence by emphasizing conservation
11-10-2010 | Leisure, Entertainment, Miscel …
Long Island Game Farm
“Evita” Comes to Long Island Game Farm
(Manorville, NY) — The Long Island Game Farm is proud to welcome “Evita,” a four-year-old Patagonian cavy, to its new habitat. Evita came to the Game Farm as the result of a generous donation. The Patagonian cavy is the third largest rodent in the world (after capybaras and beavers), reaching approximately 18 inches in height. What make the Patagonian cavy unique are its various features: the body of a rabbit, a
05-22-2008 | Tourism, Cars, Traffic
Latin Excursions
Southern Patagonia Travel on the Crucero Australis announced by Latin Excursions
Latin Excursions (latinexcursions.com) has introduced the Southern Patagonia Travel package on the Crucero Australis for 2008. The adventurous departure in Argentina and Chile combines the magic of these wild landscapes with amazing service and legendary sea routes. The cruise is ideal for families, couples and groups. Already well known for organizing trips throughout Argentina and Chile, as well as their specialty in South American cruises, Latin Excursions is offering something
07-24-2007 | Leisure, Entertainment, Miscel …
Epoque Hotels
Epoque & Avantgarde Hotels Reaches 300 Exclusive Boutique Hotels in the World
In July 2007, the unique collection of avant-garde, trendy-chic, and luxury-classic boutique hotels grows to 300 properties. Epoque & Avantgarde Hotels continues to excel in establishing itself as the most coveted collection of trend-setting and luxury-classic boutique hotels. In mid July 2007 the American hotel Representation Company reaches 300 properties in the top worldwide destinations, adding thirty more to its portfolio from the beginning of the year. Several of the most
Comments about openPR
OpenPR is clearly structured and remains true to its principle of confining itself to the essential parts. OpenPR has proven to be a very good and reliable partner to our media agency: Within the shortest time the releases are online and go down well with the media representatives. The success of OpenPR is reflected in the steadily increasing number of press releases. It is good that OpenPR exists!
Ursula Koslik, Director Marketing & PR, F+W Hamburg