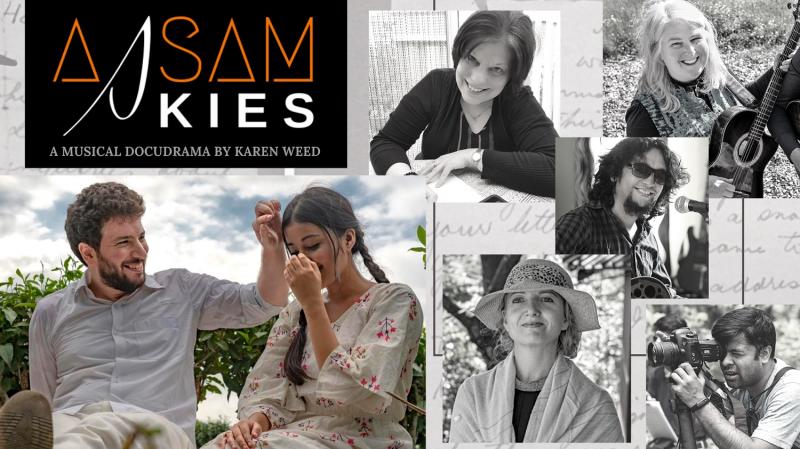 Frank Cyril Edwards did not have much idea about what awaited him when he boarded the ship Manora to India in 1919. He joined the Balijan Tea Estate in Tingrai, Assam, India as an Assistant Manager. While he was working in the garden, he met and fell in love with Rampiyari, a tribal girl from the tea garden. By 1922, they had two daughters. In 1925, Frank's fiance, Muriel Florence Collins, arrived from England. The same year, Frank forcefully took away his daughters from their mother and put them at Dr. Graham's Homes in Kalimpong. Although not much have been known about Rampiyari, she died shortly after her children were taken away from her. Frank left for England within few years with his English wife and new born son.When Karen Weed, a writer and the great granddaughter of Frank, heard the story from her grandmother, she wanted the eventful life of Rampiyari to be heard. In 2017, she wrote the poem 'Assam Skies' based on the life of her grandmother and the relationship between Frank and Rampiyari. She decided to enter the prestigious UK Songwriting Contest where 'Assam Skies' achieved Semi Finals placing. In December, 2018, Char Seawell, a folk-country singer from Bothell, USA, came forward to give a tune to the poem.In 2019, Assamese music producer, Jim Ankan Deka, was approached to produce the music for Assam Skies. He brought together a team of traditional and western musicians, actors and filmmakers to fully produce a musical docudrama based on the story. For the first time, traditional Assamese musical instruments are used for an American country-folk based song. The song was released worldwide in June, 2019.The song is sung by Char herself along with Catherine Khiangte from Mizoram. The Assamese traditional instruments have been recorded by Barun Das and Debojit Kalita in Assam. The percussionists are Prabal Gogoi and Debjani Hazarika. Jim himself played the guitar, bass and keys. Char's voice was recorded in Washington.The shooting of the video started in August with the lead actors Lain Heringman from Spain, Alice Banting Bhattacharya from UK and Gargi Buragohain from Assam. The child actors who acted in the video are Harshita Baruah and Bornali Thakuria. Few other actors who acted in different roles are Nitesh Parvat, Arnabjyoti Kashyap and Bishnu Pada Pramanik.The video was directed by filmmaker, Tarunabh Dutta assisted by Himakhi Dutta and Angshuman Bhattacharya. The still photographer is Pragyan Bezbaruah. The 2nd Unit Director is Prabal Gogoi. The video is produced jointly by Karen Weed, Jim and Debjani. The video will be released under ChaiTunes Project by Music Malt.No 22, 1st Block, 2nd Main, Koramangala, Bangalore, India.Music Malt - your online storehouse for the hottest and the latest from the world of music. Gigs, music, festivals, competitions, videos - visit us frequently for bite-sized info updates of what’s going on in the independent music circuit.