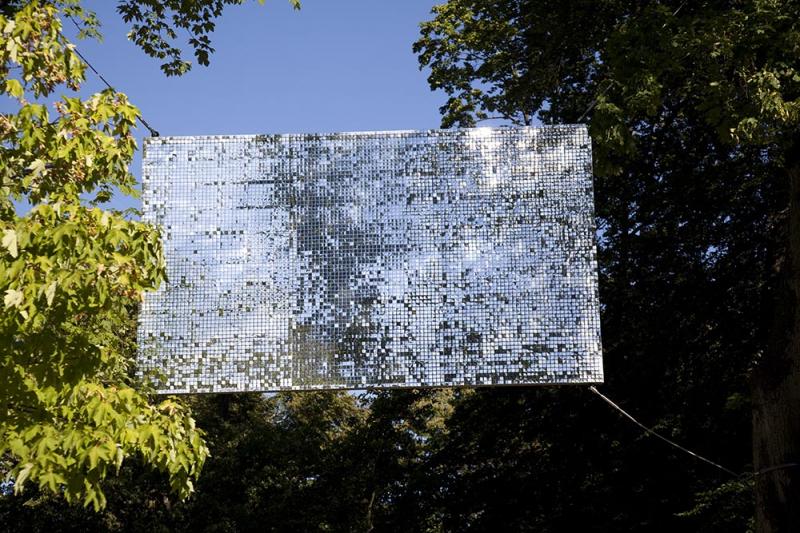 At a prize-giving ceremony attended by many invited guests, Katarina Löfström accepted the “Friends of Blickachsen Art Prize” for 2019. The Swedish artist received the prize, worth 5000 Euros, for her work “Open Source (16:9)”, created for Blickachsen 12.The Blickachsen Prize has been awarded every two years since the fourth edition of the Sculpture Biennale in 2003, honouring each time the distinctive artistic approach of one of the exhibition’s younger participants. Since 2015, the award has been endowed by the “Friends of Blickachsen”.“After careful consideration, the jury ’s decision this year to award the prize to Katarina Löfström was unanimous”, said Blickachsen founder and co-curator Christian K. Scheffel of the Blickachsen Foundation – on behalf, also, of Elisabeth Millqvist and Mattias Givell, joint directors of the Wanås Konst Sculpture Park in Sweden, and co-curators of Blickachsen 12, and Peter Murray CBE, director of the Yorkshire Sculpture Park in the UK, as permanent external jury member.“Open Source (16:9)”, Katarina Löfström ’s site-specific contribution to Blickachsen 12, shimmers from afar like a giant screen between the trees by the Kurpark pond. Thousands of reflecting sequins hang from a net stretched over a more than five-metre wide aluminium frame in what is nowadays a standard 16:9 video aspect ratio. The sequins move in the wind, each reflecting a small piece of the surroundings, but from a distance they seem like constantly changing pixels on a screen – as if in an endless abstract film featuring the movement of the wind and the changing colours of the surrounding nature.“Blickachsen has once more attracted huge critical acclaim and continues to make an important contribution to the European art calendar”, says Peter Murray. “The Blickachsen Sculpture Award has a special status and I am very pleased to congratulate Katarina Löfström on receiving the Blickachsen 12 Sculpture Award. Her ingenious use of materials and concern for site and location has resulted in a memorable and poetic installation which enhances our experience of art and nature.“ In her speech, Elisabeth Millqvist paid tribute to the artist’s work: “She is a Swedish artist with a long explorative practice that both challenges and fascinates the viewer. Her works are often poetic and elusive, she lets us make up our own narrative, but creates in her work the conditions for a changed mindset.”Katarina Löfström was born in Falun, Sweden, in 1970. She went on to study Art in Stockholm and has visited and worked in a number of countries – and also lived in Germany for a year as artist-in-residence at the Künstlerhaus Bethanien in Berlin. Today, she lives and works in Stockholm. Her videos, sculptures and installations have been shown internationally in solo exhibitions, and her works in the outside space have been installed in many places, particularly in her homeland Sweden.“Open Source (16:9)”, and the Blickachsen 12 exhibition in altogether six locations in the Rhine-Main region, can still be seen until 6 October.Artists participating in Blickachsen 12: Hanneke Beaumont, Claudia Comte, Jacob Dahlgren, My Ekman, Elmgreen & Dragset, William Forsythe, Charlotte Gyllenhammar, Jeppe Hein, Satch Hoyt, Sofia Hultén, Leiko Ikemura, Kaarina Kaikkonen, Per Kirkeby, Ruud Kuijer, Alicja Kwade, Arik Levy, Katarina Löfström, Ohad Meromi, Nandipha Mntambo, Sirous Namazi, Yoko Ono, A.R. Penck, Leunora Salihu, Sean Scully, Anne Thulin, James Webb, Winter/Hoerbelt, Fredrik Wretman, David Zink Yi.Detailed information on Blickachsen 12 can be found at www.blickachsen.com. We will be happy to supply photographs for media purposes on request.Sunita Scheffel Mobile: +49 – (0)178 – 473 25 91 presse@blickachsen.deStiftung Blickachsen gGmbH (Blickachsen Foundation) Ferdinandstraße 19 61348 Bad Homburg v.d.Höhe Germany Tel.: +49 – (0) 61 72 – 681 19 46 info@stiftungblickachsen.de presse@blickachsen.de www.blickachsen.de www.blickachsen.comAbout the Blickachsen Foundation The public benefit Blickachsen Foundation, with its seat in Bad Homburg, Germany, was established in March 2013 to oversee the Blickachsen Sculpture Biennale, which it organizes together with the municipality of Bad Homburg, the Kur- und Kongreß-GmbH and the Administration of Public Stately Homes and Gardens in Hessen. The foundation’s aim is to secure the long-term future of the Biennale, and to provide access to contemporary sculpture and installation art to an ever-growing audience in the public space. At the same time, the foundation seeks to promote the evolving cultural attraction of the city of Bad Homburg and the further Rhine-Main region, and to establish the region over time as an international centre for contemporary sculpture. In offering, every two years, a platform for exhibiting the work of both young and established artists from around the world, the foundation seeks both to promote emerging artistic talent, and to heighten popular interest in and appreciation of the most varied currents in three-dimensional art. A lively encounter with contemporary sculpture is stimulated by the diverse range of Blickachsen tours and workshops for children, young people and adults. In addition, the foundation sees itself as a mediator and point of intersection between cultural and educational institutions, supporting the dialogue between artists and museums, as well as between art and scholarship.

09-21-2016 | Tourism, Cars, Traffic
Katarina Line
Croatia’s Katarina Line Announces 2017 Brochure Featuring Expanded Fleet with …
Small Ship Cruise Company is Meeting Increasing Demand of North American Travelers for Luxury and Comfort Katarina Line, Croatia’s leading DMC and premier small ship cruise company, announced that it is expanding its fleet for 2017 with three new deluxe ships to meet demands for lavish, more comfortable cruising from North American travelers. The company, which recently published its 2017 program, has already added seven new ships in the past three
04-14-2008 | Arts & Culture
BestNetArt Artgallery
Monograph published of the artist Katarina Vavrová
A fantastic book (monograph) has now been published about the Slovakian artist Katarina Vavrová and her art. The publication of the book will even further promote Vavrová as an up and coming international artist. We strongly feel that one name to remember in the field of art is Katarina Vavrová. You rarely come across anything as beautiful and capturing as her art. Once you have seen it you will
01-24-2008 | Advertising, Media Consulting, …
Pierce Mattie Public Relations
Pierce Mattie PR Hires Katarina Maloney as Account Executive
New York, NY January 23, 2008: Pierce Mattie PR (PierceMattie.com) continues to see growth in its expanding beauty, fashion and luxury lifestyle divisions and has hired Katarina Maloney as an Account Executive to meet the demand and continue the luxury PR firm’s vision of further expansion. Katarina Maloney is the newest Account Executive for the Beauty and Fashion Division in the New York office. A California native, her passion
06-15-2007 | Arts & Culture
BestNetArt Artgallery
Art by Hristo Kerin now for sale worldwide at BestNetArt Artgallery
The Bulgarian printmaker Hristo Kerin (born 1966) has joined the team of BestNetArt Artists, and his fantastic artprints are now for sale at the Internet based BestNetArt Artgallery (bestnetart.com). Hristo Kerin specializes in artprints, etchings, and they are of a stunning quality. The prints by Hristo Kerin are beautiful to look at and a joy to own. BestNetArt Artgallery has been on the market for many years and the Gallery represents
03-16-2007 | Arts & Culture
BestNetArt.com
Now Norbert Salzwedel copper engravings from BestNetArt Artgallery
Fantastic copper engravings by the German printmaker Norbert Salzwedel are now for sale at the Internet based BestNetArt Artgallery (bestnetart.com). The engravings are of stunning quality - they are beautiful to look at and a joy to own. Now available with world wide delivery by mail. BestNetArt Artgallery has been on the market for some year and the Gallery represents the best printmakers in the world. The German artist Norbert Salzwedel
11-20-2006 | Arts & Culture
BestNetArt.com
Exlibris bookplates from BestNetArt Artgallery
Fantastic Exlibris (bookplates) are now available at the Internet based BestNetArt Artgallery (www.bestnetart.com). The bookplates are made by recognised contemporary printmakers such as Galina Pavlova, Katarina Vavrová and Erhard Beitz. Worldwide delivery within a week. BestNetArt Artgallery has been on the art market for some year and the success has been great. Small size art prints are easy to buy and safe and cheap to deliver all over the world. The
Comments about openPR
I can't but agree to the positive statements about your portal: easy to use, clear layout, very good search function, and quick editing!
Jens O'Brien, Borgmeier Media Communication