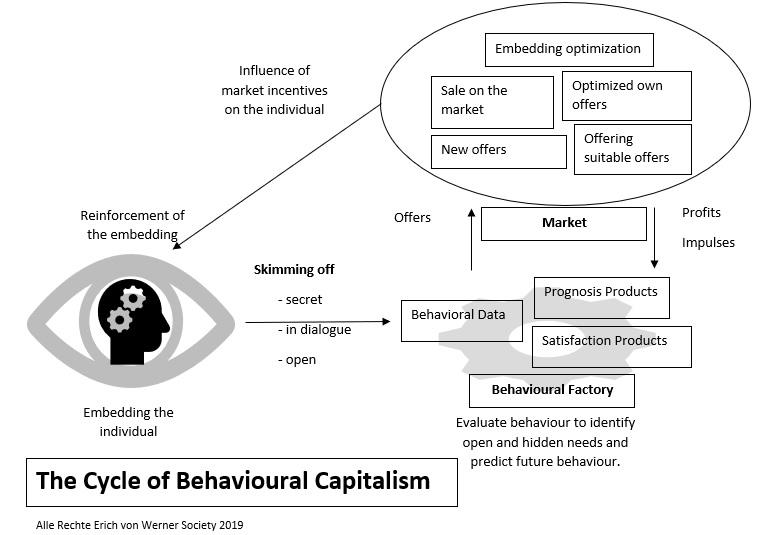 The Cycle of Behavioral Capitalism

The world is experiencing a change of times and an era of change. Dynamic, fast and at which point can this be recognized more clearly than by technological progress, which powerfully and at an incredible speed changes personal and community life and leaves almost no field untouched, be it politics, society or economy. Within the framework of this process, influence has shifted and new ones have been established. But all that almost imperceptibly, almost creepingly in the shadows and yet at the end almost all of it tangent. Technology more than ever means power and this special influence through the smart world, can be found today in the western world astonishingly bundled with a few companies, which naturally have little interest in explaining the risks of their activity too publicly, because they primarily see the opportunities of their actions and not the dangers. Who will blame them? How many people really understand their business models?This new influence of the large technology groups, which often exist only for a few years, is astonishing and astonishing, as is the development that their products have become an indispensable part of everyday life for many people and society at breakneck speed. A silent conquest and yet they are much more than just clever business models that can be easily integrated into the existing. These companies are only players on a playing field that has made their existence and growth possible in the first place. One thing that has too often been underestimated and overlooked so far is Behavioural Capitalism.The model of Behavioral Capitalism helps to do this and highlights the opportunities and challenges of a new era. It also presents a structural explanatory model for the first time.The work of Andreas Herteux is available on the official website of the Erich von Werner Society as well as in the usual scientific networks under the DOI number 10.13140/RG.2.2.32319.25768.Erich von Werner Gesellschaft Birkenfelder Straße 3 97842 Karbach Germany https://www.understandandchange.com/ Email: erichvonwernersociety@understandandchange.com https://www.youtube.com/embed/iFk2Jmo-j_IThe Erich von Werner society has set itself the goal of understanding the world and changing it for the better.It approaches this goal by analyzing what is happening on Earth - without ideological shackles or rigid thought patterns - and then devising models for solving global problems.The Erich-von-Werner Society's activities are focused on the well-being of all humanity and endeavor to initiate, deepen and promote the corresponding developments that serve this purpose.

03-08-2019 | Industry, Real Estate & Constr …
American Board of Accredited Certifications (ABAC)
Guberman PMC: In The Age of Crony Capitalism Exposing ANSI-ANAB-China-led IAF is …
New York, NY (USA), March 7, 2019 -- Daryl Guberman, quality expert, patriot, and head of Guberman PMC, LLC (http://dguberman.com) has led the crusade to free the area of quality accreditation from organizations that have active member nations who despise the United States, have been caught spying on American businesses, and even have kept on nations which are impacted by the Donald Trump travel plan, quite possibly breaking the law.
12-04-2017 | Business, Economy, Finances, B …
InGenius Results Pty Ltd
Extreme capitalism or AI inflection?
Amazon exploiting automation to burst new markets is just the beginning. Everyone needs to get serious about the prospects of losing business, jobs, income streams and opportunities if we are not ready for what comes. “Ready for AI & more Strategic inflections points?”, https://books.ingeniusresults.com/?p=934 brings insights and explores ideas to prepare for the inevitable. “So, where is that creative Spirit? “ Enjoy. P.S. Free to those who register The Evolution of Strategic Management by
06-06-2017 | Politics, Law & Society
Guberman-PMC
IAAC, ANAB, IAF and NIST Probed For Crony Capitalism, Accreditation Fraud, and A …
Inspiring candidate for U.S. Senate (I-Conn) asks the FTC to investigate an accreditation scam costing taxpayers millions of dollars. Washington, D.C. (USA), June 2nd, 2017 -- The American Board of Accredited Certifications (ABAC) is seeking the assistance of the Federal Trade Commission (FTC) to investigate three privately-owned Organizations: the Inter-American Accreditation Cooperation (IAAC), The ANSI-ASQ National Accreditation Board (ANAB), and International Accreditation Forum (IAF) for allegedly conspiring with the National Institute
03-06-2013 | Business, Economy, Finances, B …
Neela Bettridge
Can ‘New Capitalism’ save the day?
Leading international executive coach and mentor Neela Bettridge has launched her new website in a bid to help change the way Britain and the wider world do business. As countries’ national debts soar and the planet’s finite resources dwindle, Neela is guiding industry and political leaders towards a new style of capitalism – one which embraces economic sustainability and more conscious leadership. Neela, whose clients include Nestlé, HSBC and energy giant Centrica,
09-20-2011 | Business, Economy, Finances, B …
The A3 Society
New Democracy Beyond Capitalism for Post Collapse World
Based on a new model of morality developed from a new understanding of the human brain and human psychology, a new social structure is presented as the next step for mankind after the coming collapse. Jacksonville, FL, September 19, 2011 - During research into human consciousness, Bruce Nappi discovered that many conventional assumptions about the human brain were insufficient to explain all the latest observations. To explain emerging discoveries, he had
11-15-2010 | Business, Economy, Finances, B …
THECUBE
True Capitalism and Coworking Spaces
This recession has affected people in every sector, age group, and background, making this recession as crippling as the ‘Great Depression. The figures being reported in the US are grim with more unemployment yet to come and many people in their 50’s not being able to ever find work again. Some may see this as complete doom, however we see it as the shake-up we all needed to analyse value,
Comments about openPR
I can't but agree to the positive statements about your portal: easy to use, clear layout, very good search function, and quick editing!
Jens O'Brien, Borgmeier Media Communication