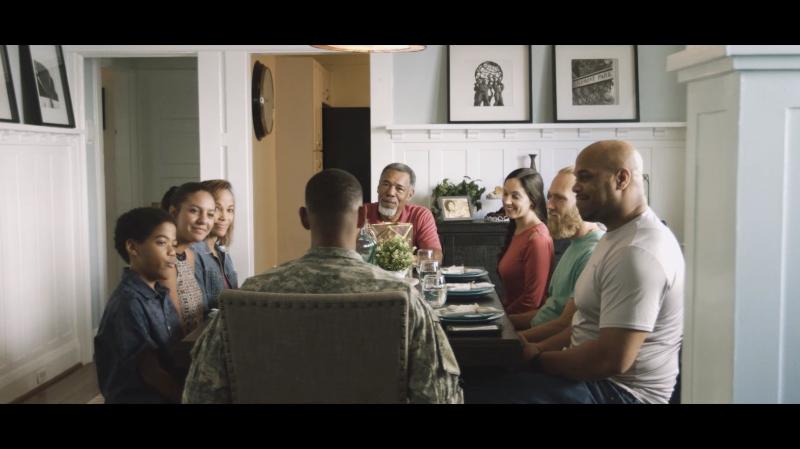 "Home of the Brave", screening at the 2nd Annual Humanitarian Film Festival, looks at veterans coming home and starting again.

CLEARWATER, FL: The films for the 2nd Annual Tampa Bay Humanitarian Film Festival in Downtown Clearwater have been selected for this September 28th festival. The selected films include six films made in Florida as well as student film projects. A complete list of films can be found on the festival’s facebook site at https://www.facebook.com/TBHumanFF.The selected Florida Films are:• Trafficked in Paradise by Olivia Wilson • A Friend Called Spiderman by Nicholas Canning • The Flip Side by William Stead • More to Life by Joshua Bowen • Epiphany by Koula Sossiadis Kazista and Katina Sossiadis • Home of the Brave by Deon Gibson “The films we are screening this year come from around the world and each film uniquely presents a different viewpoint on humanity,” said event organizer Lisa Mansell. “For example, in the Foundation for a Drug Free World, we are screening films that show the viewpoint of an addict, the child of an addict, law enforcement and people who have specifically decided to live a drug free life while making their living as musicians in the Punk music scene.”The festival will begin at noon on the 28th with a reception and VIP badge pick up at the Scientology Information Center (500 Cleveland Street). Films will begin screening at 1pm.Sponsored by the Church of Scientology Flag Service Organization, United for Human Rights Florida Chapter, the Way to Happiness Association of Tampa Bay, the Florida Chapter of the Foundation for a Drug-Free World and others, the festival will screen 41 films in the different humanitarian program centers along North Fort Harrison Avenue between Cleveland and Drew Streets.Lisa Mansell, Public Affairs Department 503 Cleveland Street Clearwater, FL 33755About the Church of ScientologyThe Scientology religion was founded by American author and humanitarian L. Ron Hubbard. The first Church of Scientology was formed by Scientologists in Los Angeles in 1954 and is now an international organization of more than 11,000 Churches, missions and groups. Scientologists work with people of all faiths to educate and resolve issues that are held in common by all. Humanitarian programs supported by the Church and its parishioners are implemented globally by governments, police departments, social service organizations and scores of non-profits who share the goal of a literate, crime free, drug free and ethical world.

10-23-2020 | Arts & Culture
Church of Scientology Flag Service Organization
Historic High Rise Provides a Window to Clearwater's History
CLEARWATER,FL: The Church of Scientology Flag Service Organization invites the community to learn more about the history of Clearwater by visiting the outdoor display on Clearwater’s timeline at the Coachman Building. Located at 503 Cleveland Street, the Coachman Building was built in 1917. At the time, it was the tallest building in Pinellas County. S.S. Coachman, one of the founding fathers of Clearwater, ran his grocery from the first floor.
05-26-2020 | Associations & Organizations
Church of Scientology Flag Service Organization
Volunteer Ministers Center Re-Opens, Provides Practical Tools to Combat Stress
Clearwater, FL - The Scientology Volunteer Ministers of Florida have re-opened their downtown Clearwater center to groups of ten or less visitors. The Center is open seven days a week, 10am to 10pm Monday - Wednesday, Friday and Sunday; from 10am to 8pm Thursday and 1pm to 10pm on Saturdays. No appointment is necessary. Visitors are welcome to come by and avail themselves of complimentary copies of the popular 'Stay
07-12-2019 | Associations & Organizations
Church of Scientology Flag Service Organization
School Supply Donations are Our Cup of Tea at Clearwater Community Volunteers Ce …
CLEARWATER, FL, US, To provide needed school supplies for Pinellas County foster children, the Clearwater Community Volunteers (CCV) will host a tea party on July 14th and collect school supplies for the July 27th “Back to School Bash Festival”. Tea party festivities will include tea along with a selection of finger sandwiches, pastries and freshly made crepes. There is no cost to attend, but each guest is asked to bring school
07-08-2019 | Associations & Organizations
Church of Scientology Flag Service Organization
Men and Women in Business Entrepreneurs Flaunt their Crowning Achievements at th …
CLEARWATER, FLORIDA, On Saturday, June 29th, The Herman and Mary Allen Foundation held their 3rd Annual Men and Women in Business Showcase in the Crystal Ballroom of the historic Fort Harrison Hotel with over 120 guests in attendance. The showcase helps small-business owners realize their potential through personal coaching and enhancing of their professional image. The Men and Women Showcase is a program of the Herman and Mary Allen Foundation to