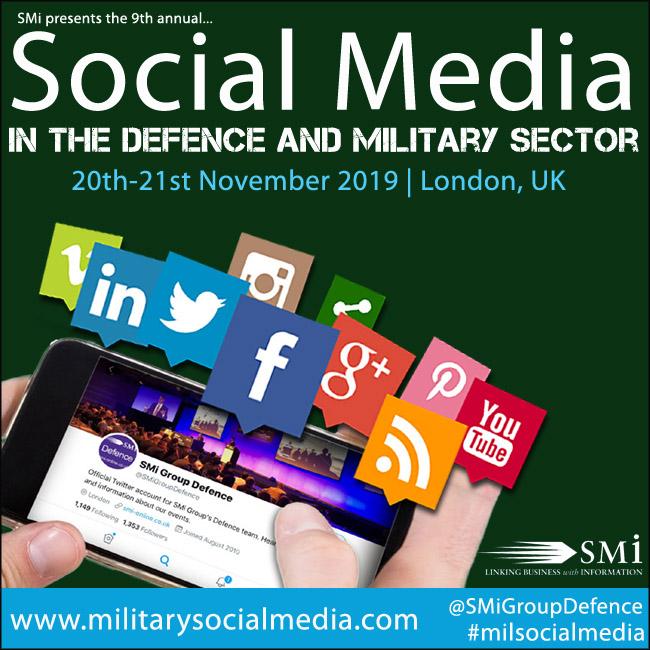 SMi reports: British Army, UK MoD and Royal Navy to present at Social Media in the Defence and Military Sector conference in November ahead of deployment of ‘Social Media Warfare’ divisionThe British Army have announced the formation of a cyber warfare unit to fight "above and below the threshold of conventional conflict". "We need to develop our asymmetric edge and bring focus to the orchestration of intelligence, information operations, cyber, electronic warfare and unconventional warfare,” announced Lieutenant General Ivan Jones, the commander of Britain's field army.The U.K.'s new special cyber operations unit, 6 Division (6 Div), will move beyond the typical cyber capabilities within the military sphere into full-blown social media "information warfare." With the primary adversary Russia proliferating fake news and political propaganda across major social media platforms, this operation has turned into a national security strategy. Learn more at SMi's 9th annual Social Media in the Defence and Military Sector conference, taking place in London on the 20th and 21st November 2019, where leading social media figures from the British Army and UK MoD will present exclusive presentations and provide the latest updates on future developments for the British Armed Forces. Leading figures presenting include:WO2 Paul Barnes, SO3 Media Operations, The British Army who will present ‘Operationalising Social Media’, he will discuss the utility of social media, how social media can change the way wars are fought and case studies from commemoration.Mr Matthew Clarke, Head of Digital Strategy, UK MoD will present ‘How to be Great at Digital Communications — The MoD’s digital journey’. He will discuss Digital planning and strategy development; Content, distribution and measurement; How to engage with your audience on digital and social; Benchmarking digital performance and What does digital great look like? Alex Schillemore, Head of Digital, Royal Navy will present ‘Holistic Approach to Digital’. She will discuss Using your website and social media to the greatest effect; Owned vs earned channels; Planning for your audiences and Evaluation.Download the new brochure to view the full agenda at www.militarysocialmedia.com/openpr The two-day Social Media in the Defence and Military Sectors conference provides the ideal platform to discuss social media strategies, platforms and tools used in the armed forces’ day-to-day activities from branding and recruitment to frontline operations, intelligence, and cyber warfare For those who would like to attend the conference a saving of £100 is available for bookings placed before 30th September. Registrations can be made online at www.militarysocialmedia.com/openpr Social Media in the Defence and Military Sector Conference: 20th – 21st November 2019 Workshops: 19th November 2019 London, UKIf you would like to showcase your solutions to key decision makers within the industry, contact Sadia Malick on +44 (0) 207 827 6748 or smalick@smi-online.co.ukGround & First Floor , 1 Westminster Bridge RoadAbout SMi Group: Established since 1993, the SMi Group is a global event-production company that specializes in Business-to-Business Conferences, Workshops, Masterclasses and online Communities. We create and deliver events in the Defence, Security, Energy, Utilities, Finance and Pharmaceutical industries. We pride ourselves on having access to the world’s most forward-thinking opinion leaders and visionaries, allowing us to bring our communities together to Learn, Engage, Share and Network. More information can be found at http://www.smi-online.co.uk

09-16-2020 | Media & Telecommunications
SmartWork Media
SmartWork Media Acquires ST Media Group Intl.
MONTCLAIR, NJ (September 15th, 2020) – SmartWork Media (www.smartworkmedia.com) has acquired all B2B titles, events, and digital media products of ST Media Group International (www.stmediagroupintl.com). The acquisition of titles is a strategic initiative to integrate the intellectual property of both organizations to create a more dynamic media company that is well positioned to meet the evolving needs of marketers in each respective industry. “SmartWork Media has a stable of powerful award-winning
08-13-2020 | Arts & Culture
New Media Film Festival
New Media Film Festival
INNOVATIVE STORIES & TECHNOLOGY CREATORS FINALLY HAVE THEIR DAY – AUGUST 15TH 2020 NEW MEDIA FILM FESTIVAL AWARDS SHOW The 121 New Media Films & Content from 32 countries that are nominees in the 11th Annual New Media Film Festival® voted. Resoundingly the nominees voted to have an online awards ceremony and forgo an in person festival this year. With 38 World – 15 U.S., and 30 L.A. Premieres and the
09-11-2017 | IT, New Media & Software
kbvresearch
Social Media Analytics Market
According to a new report, “Global Social Media Analytics Market (2017 – 2023)”, published by KBV research, the Global Social Media Analytics Market size is expected to reach $11.6 billion by 2023, rising at a market growth of 28.6% CAGR during the forecast period. The North America market holds the largest market share in Global Social Media Analytics Services Market by Region in 2016, and would continue to be a dominant
10-01-2013 | IT, New Media & Software
Kaleidoscope GmbH
Terminology goes Social Media
The importance of terminology is constantly increasing. Companies struggle to introduce an overall process and to enable the users to benefit from standardized language resources. Often, the key question is: "How do I find and, above all, motivate fellow colleagues for the common cause?" With the new version 5.3 quickTerm now offers many new features especially for these challenges. The wheel of collaborative workflows does not have to be re-invented for
12-13-2011 | IT, New Media & Software
Global Forestry Investments
Brazil's social media boom
The social media craze has been hitting Brazil as the emerging BRIC nation is reportedly becoming one of the most avid consumers of social media in the world. With an estimated 75 million internet users, it is believed that 23 percent of users regularly use Twitter, making that the highest usage anywhere in the world. Back in February, Facebook users in Brazil stood at 10 million. Today, that number
10-04-2011 | Business, Economy, Finances, B …
ngc
MEDIA ADVISORY
Meet the team of National Gift Card (NGC), the leading marketer and supplier of gift cards for use in loyalty, incentive and rewards programs. The agency offers more than 175 major retail, restaurant and prepaid cards along with full-service marketing support, secure online ordering, distribution, fulfillment services and customized programs designed to reach each client’s specific objectives. NGC representatives will be on hand both days to answer media questions about the
Comments about openPR
Your portal is fast, simple, and easy to use. Others may have more functions but they also demand more editing time, you have to preformat the text in order to achieve a good result etc. I think openPR is really fantastic!
Andreas Knepper, wallmedien AG