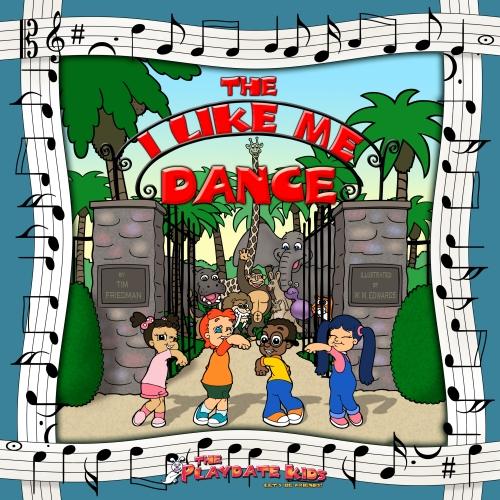 Los Angeles, CA (April 12, 2007)— Successful children's books publisher, Tena Fanning has progressed towards a new musical children’s book series after launching a thriving children’s self-help series under Playdate Kids Publishing. Fanning’s new publishing house has set a late springtime release for the first of the three books in the new musical series entitled, "The I Like Me Dance.” The author and composer of the book and CD, Tim Friedlander, is seemingly a jack of all trades. He is a Van Nuys high school teacher, multitalented musician, composer, voice over artist and producer based in Los Angeles, California. In the past, Friedlander has worked with hot music artists such as Tevin Campbell and Tyrese and been seen on E!, NBC, HBO and BET. Now, he is a featured member of the Orange Country Performing Arts Center's Art Teach Program where he has the opportunity to promote music and art in local Southern California schools. Friedlander’s career path has definitely steered him towards enriching children’s lives through his original music.Friedlander is obviously thrilled about his new venture with Playdate Kids Publishing. "I am extremely proud to have written and produced smart, fun and encouraging products for both children and parents alike. I have always wanted my music to offer inspiration and joy. With my new Playdate Kids music series, I can do just that," he said.The Playdate Kids’ first musical adventure, “The I Like Me Dance,” is not your typical children’s book. Part zoo adventure-- part songbook and part early confidence builder, the musical journey boosts a young child’s self-esteem through its encouraging text and self-assured tone. Additionally, the musical book includes a CD, a simple dance routine and sheet music so children can do their own dances at home. The tune is catchy and the lyrics promote self-worth. Through “The I Like Me Dance,” The Playdate Kids can help young children understand the importance of confidence and boost their self-esteem. For more information about Tim Friedlander or Playdate Kids Publishing products, please contact Mona Loring of M. Loring Communications PR at: 805.231.3182 or contact@monaloring.com. -30-About Tim Friedlander: Tim Friedlander was born in Spokane and raised later in Mount Vernon, two cities close to Seattle, Washington. The small town was also home to Jim Caveziel (Passion of the Christ), Chad Lindberg (Fast and The Furious) and Ross the Intern (The Tonight Show). Friedlander received his Bachelor’s degree in Music Performance with a minor in Psychology from Western Washington University and is currently working on his Master’s degree in Music Education at Pepperdine University in Malibu, California. His background in psychology helps reach kids through The Playdate Kids’ music. In addition to his work on The Playdate Kids series, Friedlander is also a multi-talented musician, voice-over artist and actor. He was recently seen as the featured clarinetist in the run of the world premier musical, “American Klezmer" by The West Coast Jewish Theatre at the Egyptian Arena Theatre in Los Angeles. Friedlander has also been fronting his own jazz group on guitar, as well as backing many popular musicians in the greater LA area. As a composer, his music can be heard everywhere from clubs, to an independent movie soundtrack, to DVDs for the San Diego marathon and the City of Cerritos, CA. As a voice artist, he has worked for Jeep and GMAC and narrated five documentaries.Media contact is MLC PR: Mona Loring contact@monaloring.com 805-231-3182

04-16-2020 | Business, Economy, Finances, B …
Big Market Research
Extension Leads Market Growth Rate, Drivers And Forecast By 2024 | TE Wire & Cab …
The recent research report on the Global Extension Leads Market presents the latest industry data and future trends, allowing you to recognize the products and end users driving Revenue growth and profitability of the market. The report offers an extensive analysis of key drivers, leading market players, key segments, and regions. Besides this, the experts have deeply studied different geographical areas and presented a competitive scenario to assist new entrants, leading
03-05-2008 | Business, Economy, Finances, B …
Kaupthing Bank
Kaupthing Bank raises equivalent of EUR 1.3 billion in long-term funding
Kaupthing Bank has concluded a series of bond private placements totalling USD 1,675 million (EUR 1.1 billion) to investors in the US and Europe. Kaupthing has also finalised a bilateral loan of EUR 195 million with a European bank. In comparison the Parent Company has only about EUR 1.1 billion of long-term redemptions for the remainder of the year and FIH has EUR 1.8 billion. The terms of the aforementioned
12-20-2007 | Business, Economy, Finances, B …
Kaupthing Bank
Iceland - Commercial property market
After sharp increases in commercial property prices last year, the market will grow calmer next year. A cool down in the economy, high interest rates and a vast increase in supply will lead to a slowdown in activity. Growth in service sector - higher concentration of property in the Reykjavik area and both new and old core areas have been growing. There are signs of a slowdown in demand in
07-03-2007 | Leisure, Entertainment, Miscel …
MLC PR for Mona Loring
NEW CHILDREN’S PICTURE BOOK ISLAND POTTY PARTY PROMOTES POTTY TRAINING
Los Angeles, CA (July 3, 2007)— In the new Playdate Kids Publishing musical book, “Island Potty Party,” author Tim Friedlander, takes a delicate situation and balances the important how-to of toilet training with a motivating island beat proven to promote potty training in young children between the ages of 2-5. Many experts agree that parents who put pressure on potty training often sabotage their efforts by alienating the child, and
05-10-2007 | Arts & Culture
Playdate Kids Publishing
PLAYDATE KIDS PUBLISHING TO BE FEATURED AT THE 2007 BOOKEXPO AMERICA IN NEW YORK …
New York, NY (May 10, 2007)— On June 1-3, 2007, Playdate Kids Publishing will be featuring their new musical series at the 2007 BookExpo America (BEA) in New York City. The Playdate Kids and their Caketown friends come back this spring of 2007 to share three rockin’ sing-along adventures sure to put a giggle and a wiggle into every child. Playdate Kids Publishing booths stand out from the crowd, with
05-03-2007 | Leisure, Entertainment, Miscel …
Playdate Kids Publishing
PLAYDATE KIDS PUBLISHING THRIVES AT 2007 LA TIMES FESTIVAL OF BOOKS
Los Angeles, CA (April 30, 2007)— Leave it to Playdate Kids Publishing to make the L.A. Times Book Festival just a little bit more… playful. This past weekend, on April 28-29, 2007, Playdate Kids Publishing featured their new musical series at the 2007 Los Angeles Times Festival of Books on the UCLA campus. Children and parents alike enjoyed the acoustic music performed by the author, Tim Friedlander, while publisher, Tena
Comments about openPR
OpenPR is clearly structured and remains true to its principle of confining itself to the essential parts. OpenPR has proven to be a very good and reliable partner to our media agency: Within the shortest time the releases are online and go down well with the media representatives. The success of OpenPR is reflected in the steadily increasing number of press releases. It is good that OpenPR exists!
Ursula Koslik, Director Marketing & PR, F+W Hamburg