Real life Thriller Details How a Life and a Livelihood Can Be Legally Stolen: A crooked judge, a mentally ill wife, a devoted husband collides At The Point of a Knife 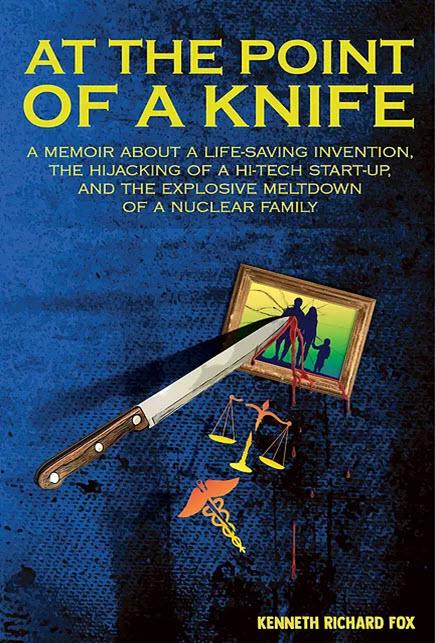 Real Life Thriller At The Point of a Knife

August 21, 2019 – Washington DC -- Dr. Kenneth Fox never dreamed he’d spend over 20 years in courts around the world fighting to get his company back. An ophthalmic surgeon, Fox had co-founded a company that had patented a medical laser technology that revolutionized certain types of surgeries. In addition to his company, he was a devoted husband, father of two, caring son for his dying parents.With so much going on in his life, Fox failed to take action as his increasingly delusional wife was becoming abusive to him and to their children. After his wife tries to stab him with a steak knife, Fox shockingly discovers mental illness runs in her family. Her father had been committed to an asylum years earlier. In a final twist of fate, manic depression, money and judicial corruption intersect. Fox’s company is wrested away from him in a plot involving a crooked lawyer and a corrupt judge who owes his career to his former partner in crime. Fox is left without his family or his livelihood. The legal system that betrayed him may be his only hope. Book information: At The Point of a Knife by Kenneth Richard Fox ISBN: 9780578502199 Published May 2019 210 pages (paperback) Available on Amazon.com in print and ebook.Mary Walewski mary@buythebookmarketing.com Buy The Book Marketing LLC 1975 Oak St., Ste 18 Lakewood, CO 80215Kenneth Fox, MD is an author and runs a global consulting company which invests in and consults for companies, inventors and their advisors involved in the development process of innovative medical technologies.

You can edit or delete your press release Real life Thriller Details How a Life and a Livelihood Can Be Legally Stolen: A crooked judge, a mentally ill wife, a devoted husband collides At The Point of a Knife here