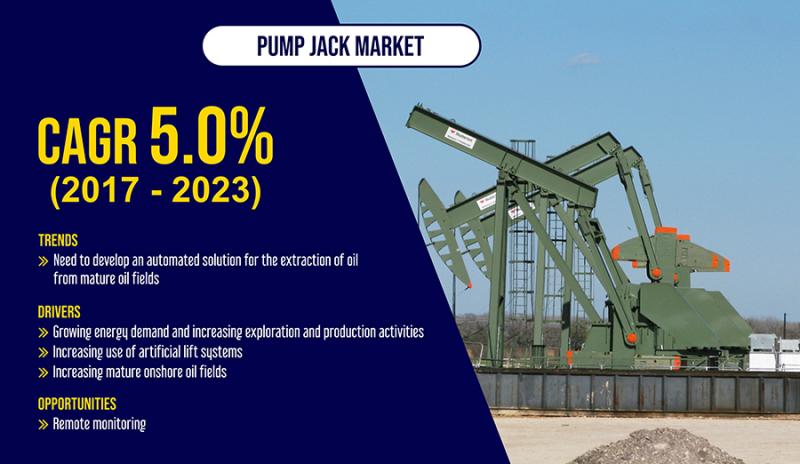 The growing number of mature onshore oil fields, rising energy consumption, and increasing exploration and production activities are some of the reasons behind the growth of the pump jack market. In 2016, the market generated a revenue of more than $2.7 billion, and it is expected to attain a size of $3.8 billion by 2023, advancing at a 5.0% CAGR during the forecast period (2017–2023). Pump jacks are used to extract crude oil, when there is not sufficient pressure in the wells to push the oil to the surface. Get the sample report pages at: https://www.psmarketresearch.com/market-analysis/pump-jack-market/report-sampleBased on application, the pump jack market is bifurcated into onshore and offshore drilling. Of these, during the historical period (2013–2016), the onshore bifurcation led the market in terms of revenue, and it is predicted to continue leading it during the 2017–2023 period. This is attributed to the fact that onshore oil drilling is less expensive compared to offshore drilling. A large number of mature wells are in onshore oil fields; thus, the sale of pump jacks is expected to be higher for these. Geographically, during 2013–2016, North America led the pump jack market in terms of revenue, and it is predicted to maintain its dominance during the forecast period. This is attributed to the increasing energy consumption and oil production activities here. Furthermore, due to the growing concern toward the over-utilization of unconventional energy resources, the need for mature field redevelopment is increasing, in turn, leading to the heavy adoption of pump jacks in the continent. The mature field redevelopment prospects display improved return on investment.Detailed Analysis at: https://www.psmarketresearch.com/market-analysis/pump-jack-marketSome of the major players operating in the pump jack market are Schlumberger Limited, General Electric Company, JCPump LLC, Young’s Welding Inc., Halliburton Company, Weatherford International, Cook Pump Company, Drake Manufacturing Company, Inc., Dansco Manufacturing, Inc., and LS Petrochem Equipment Corporation.Make Enquiry before purchase at: https://www.psmarketresearch.com/send-enquiry?enquiry-url=pump-jack-marketGLOBAL PUMP JACK MARKET SEGMENTATIONBy Application• Onshore • OffshoreBy Well Type• Vertical • HorizontalBy Weight• Less than 100,000 lbs • 100,000 lbs to 300,000 lbs • More than 300,000 lbsBy Region• North America • U.S. • Canada • Europe • Russia • Kazakhstan • Rest of Europe • Asia-Pacific • China • Indonesia • Australia • India • Rest of Asia-Pacific • Latin America • Brazil • Mexico • Venezuela • Columbia • Ecuador • Rest of Latin America • Middle-East and Africa • Oman • Kuwait • Saudi Arabia • Angola • U.A.E. • Nigeria • Rest of Middle East and AfricaContact Us: P&S Intelligence Toll-free: +1-888-778-7886 (USA/Canada) International: +1-347-960-6455 Email: enquiry@psmarketresearch.com Web: www.psmarketresearch.comAbout P&S IntelligenceP&S Intelligence is a provider of market research and consulting services catering to the market information needs of burgeoning industries across the world. Providing the plinth of market intelligence, P&S as an enterprising research and consulting company, believes in providing thorough landscape analyses on the ever-changing market scenario, to empower companies to make informed decisions and base their business strategies with astuteness.