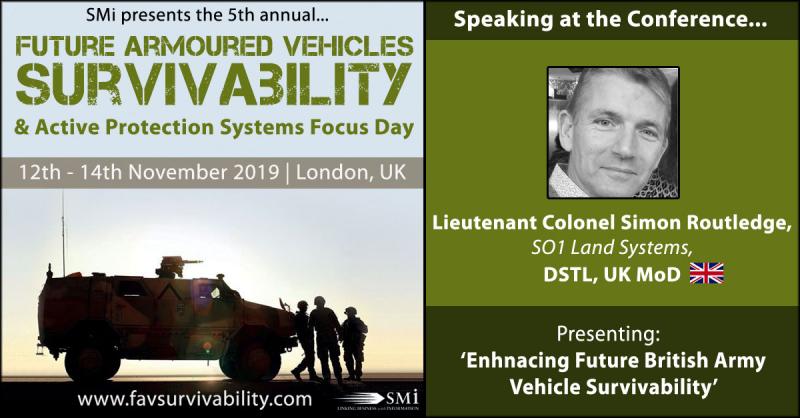 08-30-2018 | Business, Economy, Finances, B …
SimpleSense
Army Expeditionary Technology Search selects SimpleSense’s first responder tec …
Playa Vista, Calif. -- Otherwise known as xTechSearch, the Army Expeditionary Search is part of a transformation underway in all branches of the military to innovative rapidly to attack problems, like a startup. After reviewing 340 white papers submitted by small businesses and startups that showcased how novel research and technology ideas could benefit the Army's modernization priorities, the competition invited SimpleSense to pitch their idea to a panel of judges
07-10-2018 | Associations & Organizations
SMi Group
British Army, DE&S, Norwegian Army and Royal Netherlands Army to Showcase Land S …
SMi Group Reports: The Defence Safety Conference will have a dedicated focus on land safety The Defence Safety Conference, taking place at the Copthorne Tara Hotel, Kensington, London on the 1st and 2nd October 2018, will feature 8 senior briefings on land safety for the armed forces. Conference organisers SMi Group are delighted to announce that the following speakers will all share their organisations priorities, challenges and solutions when it comes
01-16-2018 | IT, New Media & Software
Indiagift
Sidharth Malhotra Celebrates His Birthday cake with Army Jawans
‘Gentleman’ and ‘Student of the Year’ star, Sidharth Malhotra celebrated his birthday on January 16 with Army Jawans and his upcoming movie ‘Aiyaary’ star cast. The cast and crew of Aiyaary were invited by the Jawans and visited the BSF Camps in Jaisalmer. Not only did the the star spend the day, singing and dancing with them but also shared a birthday cake ( https://www.indiagift.in/occasions-delivery-online/birthday/birthday-cakes ) with them. The team of
03-08-2017 | Logistics & Transport
SMi Group
Future Armoured Vehicles Weapon Systems updates from the British Army, United St …
SMi Reports: Leading military experts will meet in London on the 28th-29th June at Future Armoured Vehicles Weapon Systems 2017. Military experts alongside world leading solution providers will meet at SMi Group’s Future Armoured Vehicles Weapon Systems taking place on the 28th and 29th June 2017 to discuss the very latest technological developments from research and the industry that are enhancing combat effectiveness and lethality. Both within the conventional and
07-22-2016 | Leisure, Entertainment, Miscel …
Joe Gaspard LIfe Coaching
Army Combat Veteran turns life coach in NYC
New York, NY, 7/21/2016 – Former member of the 101st Airborne division and combat veteran of Iraq and Kuwait, Joe Gaspard, recently launched an online life coaching service. After being devastated by his 2nd collapsed lung and losing his childhood dream of being a soldier his life took what seemed like a turn for the worst. In order to combat his own depression and addiction Joe went off in search
02-28-2011 | IT, New Media & Software
WideBand Corporation
US Army Invites Roger Billings to Submit Phase II Proposal
February 25, 2011 The United States Army has invited WideBand Corporation to submit a Phase II SBIR proposal regarding the research and development of a low latency, multi-node communication architecture based on the concept of Low Latency Networking, a patented technology invented by Roger E. Billings and John A. Billings. Phase II Proposal Submission is by Army Invitation only. Small businesses are invited in writing by the Army to submit
Comments about openPR
Your portal is fast, simple, and easy to use. Others may have more functions but they also demand more editing time, you have to preformat the text in order to achieve a good result etc. I think openPR is really fantastic!
Andreas Knepper, wallmedien AG