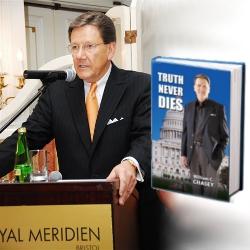 Dr. William C. Chasey tells how the CIA, FBI and IRS abused state powers to destroy him in “Truth Never Dies” In “Truth Never Dies” (ISBN 1461064449), Dr. William C. Chasey tells the true story of his downfall at the hands of the United States government. He explains the book is not intended to express anger or seek vengeance, but rather to present an honest account of what happened to Chasey and his family when he refused to participate in a CIA-sponsored assassination. Chasey explains that “Truth Never Dies” reads like an international thriller written by a creative Hollywood screenwriter. Although the story is a thriller, the author asserts that it’s not the product of imagination; rather it is the compelling true story of one of Washington’s most successful lobbyists, William C. Chasey. For over 20 years, Chasey enjoyed extraordinary access to the U.S. Congress. He was at the top of his game. He had wealth, power and prestige. This former Marine Corps Officer had the world at his finger tips. No one ever questioned his motives or integrity.This all changed when he opened communications between Libya and the U.S. Congress over Pan Am 103. Chasey explains that he did his job too well and shocked the Clinton Administration when he took a U.S Congressman to Libya for discussions with Libyan leader Muammar Qadhafi. The last thing the administration wanted was a Congressional oversight investigation by some of Chasey’s Congressional friends.According to Chasey, when the CIA saw how close Chasey had gotten to the Libyan leadership, they tried to blackmail him into using his unique access to the Libyans to initiate a CIA-sponsored assassination of the two Libyan intelligence officers who were indicted for blowing up Pan Am 103, Abdel Al -Megrahi and Lamin Fhimah. Chasey refused to be a part of this plan.Chasey’s shocking story describes what these feared institutions, working together, did to punish him and his family. His refusal to cooperate with the CIA resulted in the obliteration of his reputation, a 6-year FBI investigation, an FBI sting operation, financial ruin, criminal charges and incarceration in federal prison.“I love my country, but I fear my government,” Chasey says. “I fully expect that the government will deny what I've said. Now that my story is written, I am confident that it will never die, because truth never dies.”Chasey hopes that readers will be outraged as he explains that the government stopped at nothing to get even with him for not performing according to their expectations, no matter how credible and honest he was. Chasey also believes that international audiences interested in current affairs, politics, government and Pan Am 103 will find his book compelling.About the Author: William C. Chasey is the founder and President of the Foundation for Corporate Social Responsibility in Warsaw, Poland. A former Washington lobbyist, he is an educator, author, research scientist, inventor, and served as a senior campaign advisor to President Ronald Reagan.Puller Publications is a publisher of non-fiction, biographical and autobiographical works. Their main office is in Nicosia, Cyprus with representation in the San Diego California area.Puller Publications 137 Via Coronado Rancho Sante Fe, CA 92091 USAMEDIA CONTACT: William C. Chasey Email: chasey@ipgate.pl Phone: +1 (858) 525 1751 Website: http://www.truthneverdies.com

News-ID: 181789 • Views: 1373
Comments about openPR
Your portal is fast, simple, and easy to use. Others may have more functions but they also demand more editing time, you have to preformat the text in order to achieve a good result etc. I think openPR is really fantastic!
Andreas Knepper, wallmedien AG