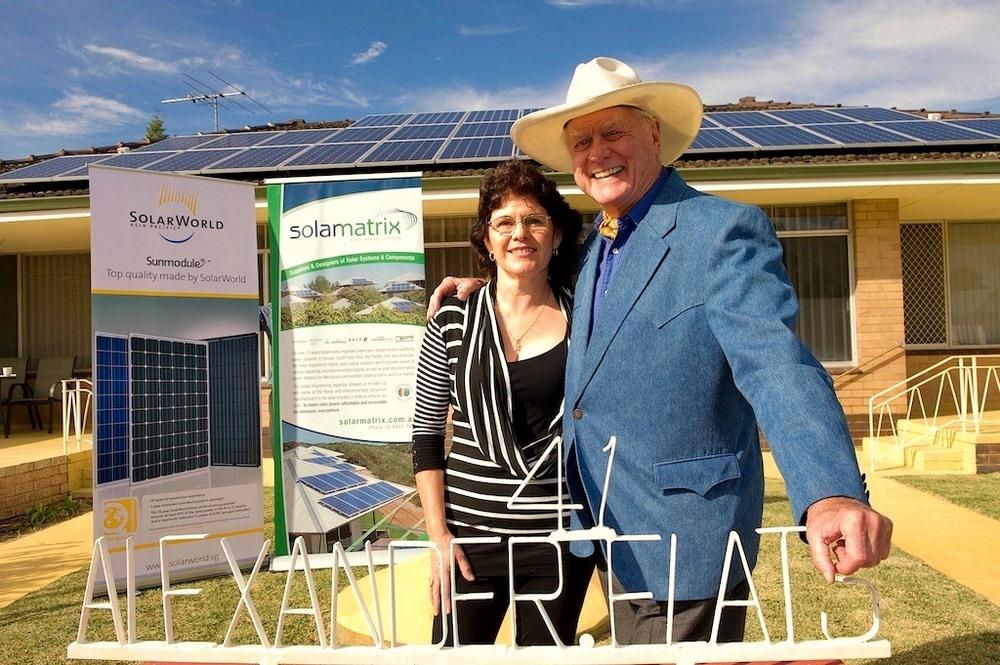 Larry Hagman, American film and TV icon, known from playing the legendary J.R. Ewing in the 80’s primetime soap opera Dallas spent four full days in Perth, WA attending the Supanova Pop Culture Expo and spreading the word about solar energy.On his last day before flying back to Los Angeles, Larry Hagman, Solarmatrix and the Sustainable Energy Association (SEA) went on a tour through Perth to promote clean and renewable energy from the sun.Larry Hagman, coming from the background of big oil in his role as J.R. has long recognised that solar is the energy of the 21st century. Owning a 90 kW solar power system including SolarWorld 240 Watt panels which he believes to be the largest domestic rooftop solar power system in the USA, he is reaping the benefits of producing clean energy and made a considerable contribution to the environment. Since 2010 Mr. Hagman acts as the spokesperson of the German premium solar manufacturer SolarWorld. In 2009, the local Western Australian company Solarmatrix was the first business to introduce SolarWorld panels to the Australian market and has since established its position as the largest SolarWorld supplier in Australia. Larry Hagman, Solarmatrix and the SEA went to visit a typical Australian installation with SolarWorld Sunmodule Plus 230 Watt panels in Rockingham, just 30 minutes south of Perth. The proud owner of the 5 kW residential solar power system Beryl Beckwith had the chance to sit down and speak face to face with the TV legend Mr Hagman. Both are just amazed how easy and affordable it is to generate clean electricity with a reliable and high performing solar system. SolarWorld modules are among the best in the world and have proven their performance over several years by consistently dominating the independent rankings conducted by Photon magazine. Larry Hagman successfully changed the rules of the game and explains “electricity prices have been rising constantly over the past years, why should I pay my electricity retailer if I can generate my own electricity and get paid for it?” So now instead of paying $40,000 per year in electricity bills he manages to receive a yearly refund from his electricity retailer. The same applies on a smaller scale for Mrs Beckwith who enjoys the cheques coming in from Synergy for the surplus electricity she automatically exports back into the grid. Mrs Beckwith tells Larry Hagman “solar power has been a fantastic investment, for the environment as well as for my pocket.” Thanks to the premium feed in tariff of a total of 47 cents, homeowners in WA can rely on stable payments from Synergy. From 1st of July 2011 onwards, this feed in tariff in WA is reduced to a total of 27 cents for new residential solar power systems.Solarmatrix is proud to be the chosen supplier of highest quality solar power systems in Australia. To reach Australia’s goal in cutting greenhouse gas emissions by 5-25% in 2020 compared to 2000 levels, Solarmatrix believes it is necessary to introduce a stable nationwide feed in tariff for renewable energy systems that also allows commercial installations to participate in the scheme. So far, the existing feed in tariff has only been available for the residential market.About Solarmatrix Solarmatrix is a passionate and innovative Australian solar power company specialised in the wholesale and project engineering of premium solar power equipment. Solarmatrix represents first-class solar power manufacturers such as SolarWorld, Bosch Solar Energy, Schott Solar, SMA and KACO in Australia and offers its expertise in solar project engineering for large commercial grid connected solar installations and stand-alone systems in remote areas as well as hybrid power systems.About SolarWorld SolarWorld was founded in Germany in 1988 as an individual company and has since developed into one of the largest solar businesses in the world. Today, the company employs more than 3,300 staff members in its locations in Germany, Spain, France, South Africa, Asia and USA - and this number is growing. With its mono- and polycrystalline solar panels, SolarWorld offers an innovative module concept. Plus sorting guarantees the highest efficiency of the installation. The fully automated manufacturing process in SolarWorld factories makes for consistently high-quality modules and therefore for high returns in the long-term. SolarWorld is represented by Solarmatrix in Australia since 2009.Solarmatrix Pty Ltd, 6/4 Whyalla Street, Willetton, Western Australia 6155 www.solarmatrix.com.au Phone: +61 8 9457 4341 Press contact: Georg Dreher Email: Georg.dreher at solarmatrix.com.au

You can edit or delete your press release Shine, Baby, Shine! here