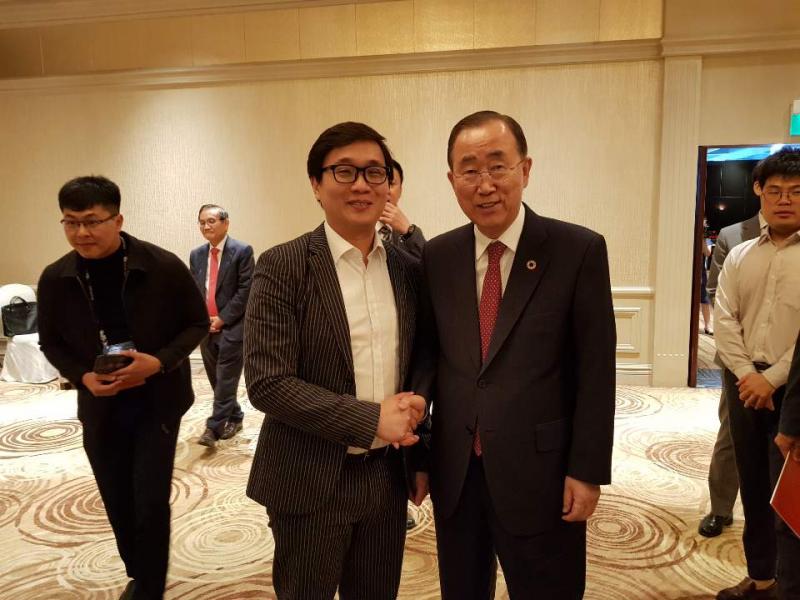 The World eSports & Blockchain Summit and the VIP luncheon were held in Singapore from 17 to 18 July 2019. His Excellency Mr Ban Ki-Moon and Mr Anndy Lian were the guest speakers and have shared similar views on the future of the blockchain and the impact for the world.At both occasions, Mr Ban, former United Nations Secretary General has shared his views on how blockchain technology can create social impact. During his terms with the United Nations, he has expanded global development efforts for the organisation. The 2030 Agenda creates a blueprint for collaboration and partnership to create the future we want. Issues such as poverty, gender equality, education, climate change, public health and inequality can do better with the adoption of new technology such as blockchain.Mr Lian shares the same perspectives with Mr Ban on how blockchain technology can help to create social impact and how this new technology creates an opportunity to reshape the world. He has been an active advocate for blockchain and in various occasions, he has voiced out that blockchain and global health can work closely together and intergovernmental organisations such as United Nations should take the lead.“Blockchain technology if used in the correct manner will cut waste and reduce fraud in the healthcare industry. The money and resources wasted could be put to better use, creating social impacts for the world. I have spent time in creating supply chain solutions for the pharmaceutical companies to authenticate medical and healthcare products. I hope using the same mindset and technology to also solve fraud and misuse of funds for both the giving and receiving parties. With that, we can minimize wastage, track funds, products and people in a controlled trustful environment, while harnessing the the true meaning of blockchain. I have spoken to Mr Ban and admired his work at the United Nations. Mr Ban has given me his namecard and I have promised will to send him a copy of my book “Blockchain Revolution 2030” to his office in South Korea. I will also take this chance to exchange some ideas with him. ” Anndy Lian, Blockchain Advisor to Asian Productivity Organization and blockchain book author explained his views.The World eSports & Blockchain Summit MARVELS Singapore 2019 led by Park Bong-Kyu, is well attended by regional dignitaries and experts such as Dennis Verbaas, Founder of Verbaas Capital, BK Kim, Founder of BK Medical Group, Bong Se-Jong Chairman of Korea Chamber of Commerce in Singapore, DATO’ Kwon Byung-Ha Chairman of Henikwon Group in Malaysia, Kwon Young-Keol Principal of Gyewon University, Kim Young-Chul,Chairman of VINE Group, Lee Sung-Lim Honorary Chairman of the Korean Federation of Art and Culture Organizations, Masa, CEO of Alice & Trunk Hotel, Choi Jin-Young, Chairman of BiTbank and Former Mayor of Namwon City, Jennifer Han, Partner of PwC and Jennie Yeung, Chairperson of White Capital USA.Blockchain is a very new technology and is at the very early phase. Many believe that this technology can create new beginnings and reshape the world. We believe that blockchain will only give us an opportunity to change, the world must work together to make things work. The CEOs and leaders present at the summit are beginning their blockchain journey and fusing it with their traditional business. This is a good start for the new technology. Source: https://blockcast.cc/editors-picks/blockchain-for-social-impact-an-opportunity-to-reshape-the-world-guest-speakers-ban-ki-moon-anndy-lian-share-the-same-the-views/ MediaCompany: Blockcast.ccPerson: Joann ParkTitle: EditorEmail: contact@blockcast.ccWebsite: www.blockcast.cc21 Bukit Batok Cresent #09-79 WCEGA Tower Singapore 658065Blockcast.cc is a broadcasting news source for the blockchain community. Founded in Singapore and has a network of contributors in China, Hong Kong, Korea and Malaysia. We aim to bring you the latest blockchain insights across the globe.

You can edit or delete your press release Blockchain for Social Impact: An Opportunity to Reshape the World- Guest Speakers Ban Ki-Moon & Anndy Lian share the same the views here

12-17-2019 | IT, New Media & Software
Blockcast.cc
Catching Up with Anndy Lian, Inter-Governmental Blockchain Advisor at the Singap …
The 2019 Singapore Fintech Festival (SFF) kicked off on Monday at the Singapore EXPO, marking the first day of the world’s biggest annual fintech gathering. The Blockchain Week follows back to back with SFF. We have met many good projects such as TransferWise, Razer Pay, FlovTec, Zigway and more. We have also managed to catch up with some of the leading blockchain practitioners at Singapore this week. We will collate
08-02-2019 | IT, New Media & Software
blockcast.cc
Anndy Lian Officially Announced his Resignation at Linfinity, Continue to Advise …
On 30 July, Mr Anndy Lian has officially announced that he has stepped down from Linfinity as their CEO to pursue an international mission to help governments and international businesses. This was presented at a closed door luncheon well attended by regional business leaders, former politicians and media. ”I have always wanted to do more for the blockchain industry that is why in the recent months, I become an advisor to
07-26-2019 | IT, New Media & Software
Blockcast.cc
Anndy Lian, Blockchain Advisor to Asian Productivity Organization: Introduce Inn …
Mr. Anndy Lian is appointed as the Blockchain Advisor for The Asian Productivity Organization (APO). The appointment ceremony was held in May 2019 in Bangkok and Dr. Santhi Kanoktanaporn, Secretary-General of APO, hosted the ceremony and personally presented the appointment. He will be using his knowledge to help members’ countries implement and introduce innovative use of blockchain technologies. The Asian Productivity Organisation (APO) is an intergovernmental regional organisation established by Convention

05-10-2019 | IT, New Media & Software
Rwaltz Software
Facebook Removed Ban on Crypto and Blockchain Ads
After one year of restrictions, Facebook decided to remove the ban on cryptocurrency and blockchain based ads. In January 2018 Facebook the social media firm has been decided that the ads involving blockchain technology, Educational information, industry news and event that are related to cryptocurrency have to take prior written approval before displaying add. But On May 8, Facebook updated its advertisement policy and announce that the restrictions on cryptocurrency and blockchain
03-15-2019 | Politics, Law & Society
NordVPN
Article 13: fighting the EU meme ban with memes
The EU is close to passing a copyright reform law to update its copyright legislation for the digital age. The final vote on the Copyright Directive is expected to take place in the European Parliament plenary between 25 and 28 March. “In many respects, the reforms are necessary to protect the rights of content creators and artists. However, two poorly formulated articles are threatening to have a damaging effect on
11-01-2018 | Business, Economy, Finances, B …
SGS
Canada Introduces Blanket Ban on Asbestos
Canada has published two pieces of legislation that will amend the Canadian Environmental Protection Act, 1999 (CEPA 1999), and will effectively introduce a blanket ban on asbestos. Published in Part II of the Canada Gazette in October 2018, the two pieces of legislation are: • Prohibition of Asbestos and Products Containing Asbestos Regulations SOR/2018-196 (the Regulations) • Order Amending Schedule 3 to the Canadian Environmental Protection Act, 1999: SOR/2018-193 (the Order) SOR/2018-196 effectively prohibits
10-11-2018 | Business, Economy, Finances, B …
CW GROUP
Global cement capacity curbed by Chinese expansion ban through 2023
Global cement capacity is forecast to edge up by almost one percent per year on average between 2018 and 2023, according to CW Research’s 2H2018 update of the Global Cement Volume Forecast Report (GCVFR). The slim increase reflects a context of capacity rationalization efforts in China, which are offsetting additional capacity elsewhere at the global level. Usually accounting for half of the world’s total, Chinese cement capacity will slow down
06-05-2012 | Business, Economy, Finances, B …
Gruber Law Offices,LLC
Ban On Hands-Free Devices?
In 2010, there were over 3,000 roadway fatalities involving distracted drivers. Due to a growing concern over the amount of roadway fatalities caused by distracted driving, the National Transportation and Safety Board (NTSB) recently issued a recommendation to state governments advising state governments that they ban the use of hands-free mobile devices while driving. The recommendation, if adopted, would outlaw non-emergency phone calls and texting by operators of every vehicle
12-28-2010 | Science & Education
http://bit.ly/g2lh3D
Ban on 'Endosulfan' aimed at destroying India's exports
(UNI) The insecticide industry was up in arms against banning of Endosulfan, an input used in agriculture production, saying the European Union (EU) lobby wanted its elimination to destroy 70 per cent of the world exports of the product from India. The industry was of the view that arguments put forward by an international committee for imposing the ban was not based on scientific evidence, but by the brute display
Comments about openPR
We publish our press releases on openPR.de because we like people who are "open" - just like us.
Frank Obels, CEO, INCONET - Informationssysteme, Communication und Netzwerkberatung GmbH