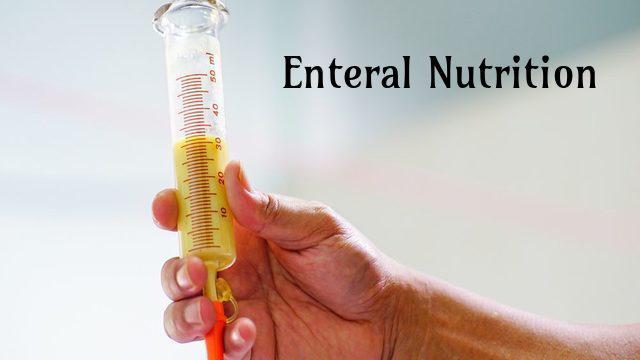 Enteral nutrition, also known as tube feeding refers to any method of feeding that uses the gastrointestinal (GI) tract to deliver caloric requirements, including normal oral diet or liquid supplements. Nasoenteral, also known as nasogastric feeding tube is placed in the stomach through the nose, whereas a jejunostomy tube is placed directly through the skin. The tube feeding formula is used in patients suffering from chronic conditions including head trauma, cancer, and strokes. Moreover, the formula helps premature infants to gain required nutrition and medications. According to the National Center for Biotechnology Information (NCBI), nasogastric tube is most preferred method for short term feeding in the acute phase of stroke and is commonly used for providing nutrition, hydration, and essential medications.

Major factors propelling growth of the global enteral nutrition market are rising prevalence of chronic diseases such as diabetes, heart disease, and cancer coupled with increasing health care expenditure, worldwide. According to the American Diabetes Association (ADA), long term use of nutritional support with diabetes specific formula helps reducing chronic complications of diabetes such as cardiovascular diseases and according to the National Center for Biotechnology Information (NCBI), the use of enteral nutrition is helpful in patients with chronic heart failure (CHF). Further, according to the Office for National Statistics, in the U.K., total health care expenditure was US$ 239.92 billion in 2014, which increased by 3.6% and pegged at US$ 248.51 billion in 2015. High health care expenditure of a region depicts the affordability of the patients for expensive medical services. This in turn, is anticipated to support the overall growth of enteral nutrition market as according to NCBI, tube feeding a patient involves higher cost as compared to those without tubes. Enteral nutrition is used for patients across all age groups, however, the geriatric population segment is the most lucrative segment. Health concerns such as metabolic disorders and loss of appetite are more prevalent among the geriatric population, which is a key factor for growth of the enteral nutrition market.

North America dominated the enteral nutrition market in 2016, accounting for over 30% of the market share and is expected to retain its dominance throughout the forecast period (2017–2025). Rising geriatric population in the region coupled with increasing incidences of chronic illnesses are some of the key factors complementing growth of the enteral nutrition market in the region. According to the Centers for Disease Control and Prevention (CDC), heart diseases, cancer, diabetes and strokes were the leading causes of disabilities and deaths in the U.S., in 2016. Moreover, according to the National Cancer Institute, in 2016, approximately 1.6 million patients were diagnosed with cancer in the U.S., out of which 0.59 million died from the disease. These factors are responsible for increased use of enteral nutrition in the U.S., thereby fuelling growth of the market in North America.

Asia Pacific is projected to be the fastest growing market for enteral nutrition, exhibiting a CAGR of 6.35% over the forecast period, with India and China being the major contributors in the region. China and India have high proportion of geriatric population. According to the United Nations Economic and Social Commission for Asia and Pacific (UNESCAP), the geriatric population in Asia Pacific is rising significantly. In 2016, the proportion of geriatric population in North East Asia was around 17%, which is anticipated to cross 35%, whereas, in North and Central Asia it is projected to cross 20% by 2050. Furthermore, diabetes has become a major concern for the populace in this region.

According to the data provided by the National Center for Biotechnology Information (NCBI), in 2014, the region accounted for approximately 150 million diabetic patients, out of which, over 95% fall in the category of type 2 diabetes (T2DM). Further, according to the World Health Organization (WHO), in 2016, China had high diabetic population, which was around 110 million and the number is expected to increase to 150 million by 2040. However, China’s healthcare spending has increased significantly over the past decade, from US$ 90.8 billion in 2004 to US$ 590.2 billion in 2014 and the same is expected to increase further in the future. The steadily growing health care expenditure is expected to confer a boost to this market growth as high expenditure on health care indicates the affordability of patients for expensive medical services. This in turn, is expected to strongly support growth of the enteral nutrition market in Asia Pacific in the near future.

Among age groups, the above 60 segment accounted for the largest market share in 2016, and is expected to be the fastest growing segment, as geriatric population requires more support services and the healthcare spending is also high for this segment. According to the Department of Economic and Social Affairs Population Division, the geriatric population (aging 60 or above) is expected to increase by 56% between 2015 and 2030 and according to the NCBI spending on health care services for the elderly population has been increasing since 1965. These are the major factors, which are expected to support growth of the enteral nutrition market over the forecast period.

03-19-2019 | Advertising, Media Consulting, …
QandQ Market Research
Enteral Feeding Devices Market
https://www.qandqmarketresearch.com/reports/7624728/enteral-feeding-devices-market-36 The global Enteral Feeding Devices market is valued at xx million US$ in 2018 is expected to reach xx million US$ by the end of 2025, growing at a CAGR of xx% during 20192025. This report focuses on Enteral Feeding Devices volume and value at global level, regional level and company level. From a global perspective, this report represents overall Enteral Feeding Devices market size by analyzing historical data and future
06-28-2018 | Business, Economy, Finances, B …
Coherent Market Insights
Enteral Nutrition Market Analysis and Outlook 2025
Enteral nutrition also known as tube feeding, is a way to nutritional feed containing carbohydrates, proteins, water, fats, vitamins, and minerals to patients through tubes. The tube that is placed through the nose in the stomach is called as nasoenteral or nasogastric feeding tube and the tube, which is placed directly through the skin in the stomach is called jejunostomy or gastrostomy. Patients suffering from chronic conditions including head trauma,
05-23-2018 | Health & Medicine
Persistence Market Research
Enteral Feeding Devices Market Examines the Growth over 2024
Enteral feeding is the administration of nutrients directly into the digestive tract via a tube in the patients who cannot take oral nutrition. The enteral feeding is placed into the stomach, duodenum or jejunum via either the nose, mouth or through percutaneous route in severely ill patients. Enteral nutrition is usually done through different types of tubes. For example depending upon the placement of the tube, the process has been
02-04-2018 | Health & Medicine
TMR
Enteral Feeding Devices Market Size Demand Will Increase by 2019
The global enteral feeding devices market is progressing at a CAGR of 6.2% between 2013 and 2019, according to a new market research report. The market was valued at US$2 bn in 2012 and is expected to reach US$3.1 bn by the end of 2019, assuming the given estimated growth rate stays consistent.The report is released by Transparency Market Research. The report, titled “Enteral Feeding Devices Market - Global Industry Analysis, Size,
01-09-2018 | Business, Economy, Finances, B …
business news
Global Enteral Feeding Formulas Market 2018 - Abbott, Danone, Nestle, Victus
The statistical surveying information incorporated into the Enteral Feeding Formulas report is the aftereffect of significant essential and optional research exercises. The report fragments the global Enteral Feeding Formulas market based on makers, item compose, applications, and regions. In this report, each fragment is contemplated completely and measurements are introduced in detail. The report offers an exact outline of the global Enteral Feeding Formulas advertise covering key factors, for example,
12-11-2017 | Health & Medicine
TMR Research
Enteral Feeding Formulas Market : Status and Forecast 2017 - 2025
Global Enteral Feeding Formulas Market: Snapshot Enteral feeding implies a direct method of artificially inserting nutrients and supplements into the GI tract. All forms of tube feeding methods, including gastronomy, nasojejunal, nasogastric, and orogastric, are considered to be a part of enteral feeding methods. In most circumstances, children are in a greater need of enteral feeding due to several medical issues that render them to ingest foods in a natural manner.
Comments about openPR
I can't but agree to the positive statements about your portal: easy to use, clear layout, very good search function, and quick editing!
Jens O'Brien, Borgmeier Media Communication