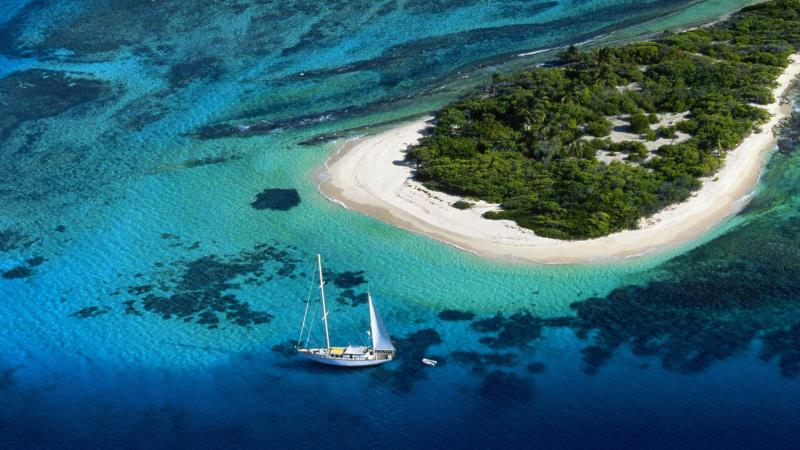 As the largest Belize island, Ambergris Caye is 25 miles long and filled with a plethora of lagoons, sandy beaches, and reefs to explore. Its major settlement is San Pedro Town, which has the highest concentration of accommodations and activities in the country.

Vacationers and retirees alike flock to the island because of its natural beauty and to experience a sophisticated lifestyle at an affordable cost. You, too, can enjoy the excitement and relaxation that Ambergris Caye offers.

A Brief History
Mayans were the first inhabitants of the southern tip of the Yucatán Peninsula. In order to preserve their home as a paradise, they dug a narrow channel to split the peninsula in two. This created Ambergris Caye off the coast of Belize in Central America.

As Ambergris Caye’s only inhabited town, San Pedro was established primarily as a fishing village. Although fishing is still a big contributor to its economy, tourism has turned into the biggest contributor. Given its beauty and serene tranquility, it’s no wonder it served as the inspiration for Madonna’s hit song, La Isla Bonita.

Ambergris Caye hasn’t fallen trap to the resort-like atmosphere of a Puerto Vallarta or Cancun. Instead, it remains a bustling, charming town with buildings no higher than three stories.

Activities to Do
Since Ambergris Caye has remained a paradise apart from mainland Belize, there are many natural activities for you to do, both on land and water.

Over time, the island has developed a private bird sanctuary at Caribbean Villas in the narrow forest region to the south of San Pedro. There’s a multilevel observation tower in the forest specifically for birdwatching. Among the shrubs and fruit trees, you can see the Yucatán Vireo, Great Kiskadee, Yellow-bellied Elaenia, Gold-fronted Woodpecker, and so many more.

Off the shore, sailing presents an opportunity to investigate pristine ocean waters and the second largest barrier reef in the world. Also, there are three atolls, which are ring-shaped islands made of coral. More than 200 islands are sprinkled throughout the ocean as well. Along with chartering a sailboat to cruise the water, you can use the boat for lodging.

With such a robust ocean environment, sailing opens the door to many fishing, diving, and snorkeling opportunities. You can do any kind of fishing all year, including trolling, fly, and spin fishing. However, you don’t have to fish from a boat. There are many fishing spots on shore too. In any case, make sure that you get a fishing license.

Places to Explore
Speaking of the reefs, the Belize Barrier Reef Reserve System sits about half a mile off of the island. It’s the longest system in the Western Hemisphere. The inner reef water is shallow and has a blue tinge, while the outer reef water is deep and looks dark royal blue. Its inhabitants vary greatly, from Rainbow Tropical Fish and majestic coral gardens to delicate sea fans and algae.

The Hol Chan Marine Reserve is a sanctuary about 4 miles south of Ambergris Caye. Established in 1987, it stretches for about 3 square miles and is divided into four zones. Although separate from the reef, it’s a great spot for diving and snorkeling to see various fish species.

There are numerous natural wonders to survey on land as well. Beneath the surface, the Mayans created mysterious underworlds. You can adventure into some of the caves with a guide while floating on an inner tube with lights to illuminate the way. Some of the best caves are Caves Branch Cave, Actun Loch Tunich Cave, Actun Tunichil Muknal, Che Chem Ha Cave, and Barton Creek Cave.

During the six-day event in July or August, you’ll see cultural performers, musical entertainers, and dancers from those countries throughout San Pedro Town. There’s also a Queen of the Mayan Costa Beauty Pageant, which crowns a Reina de la Costa Maya, and a range of art, clothing, and food booths.

El Gran Carnaval de San Pedro is similar to Mardi Gras in New Orleans. The town is one of the last places in Belize that still celebrates Carnival. As a pagan celebration, it’s held during the week before Ash Wednesday and the Lenten Season.

During this time, the town indulges in bodily pleasures. For instance, dancers wear outlandish costumes and perform through the streets. On the final day, everyone goes into the streets to paint each other with a mixture of raw eggs and water paints. The goal is to paint as many people as possible.

In addition to these big celebrations, Ambergris Caye hosts San Pedro Day every year on June 27. It’s an observance of the first families that made the island their home. There’s also Township Day on November 27, which features music, fishing tournaments, and parades.

Living on Ambergris Caye in Belize
If you decide to move to or retire on Ambergris Caye, you can make your funds go further. Compared to other parts of Belize, the cost of living is a bit higher on the island because everything has to be transported there. Despite that, it’s still quite a bit cheaper to live in San Pedro Town than in many parts of the United States.

Best of all, living on Ambergris Caye gives you access to more activities and attractions than other parts of Belize. Also, the island has relatively low property taxes and utility costs. Since golf carts are the preferred way to get around San Pedro Town, you save on travel expenses as well. Although, taxis and bicycles are good options too.

Are you ready to enjoy the beauty and attractions that make Ambergris Caye so alluring? Whether you’re visiting or planning to make the island your home, make sure that you have your finances in order first.

09-06-2019 | Business, Economy, Finances, B …
Caye International Bank
Thinking of Retiring to Belize? Keep These 7 Budgeting Tips in Mind
If you’re wondering if Belize is the ideal setting for your retirement years, don’t feel alone. There are many ex-pats who find that the climate, the cost of living, and the eclectic mix of cultures is to their tastes. How do you know if this is the right choice for you? The only way to know for sure is to learn more about what to expect in terms of the general
07-26-2019 | Business, Economy, Finances, B …
Caye International Bank
Do You Think Offshore Banking is Only for the Wealthy? Think Again!
With the mention of offshore banking, some have visions of mansions, traveling by private jet, and being driven around town in a limousine. That’s because some people assume that having offshore financial accounts requires having lots of money or because they’ve watched too many James Bond movies. In reality, you don’t have to be rich in order to establish an offshore account. People in many different lines of work have offshore
06-18-2019 | Business, Economy, Finances, B …
Caye International Bank
Find out about the seven trends in offshore banking
For many individuals and businesses, offshore banking is the ideal way to diversify assets and protect wealth. Whether you’re safeguarding assets for future generations, saving for retirement, or starting an international business, offshore banking can be the right choice. Offshore banking varies from one jurisdiction to the next, and not all services are right for everyone. Staying ahead of trends in offshore banking can help you decide what is right for
06-07-2019 | Business, Economy, Finances, B …
Caye International Bank
Belize is Booming and Why You Should Care
If you’re at all interested in international finance, offshore banking, or international real estate, then you’ve probably already come across one fact time and again: Belize is booming. While that’s great news for a lot of people, you might be wondering why you should care about it at all. The truth is that Belize is booming because there are so many great opportunities within the country for individuals, families, retirees,

03-19-2019 | Business, Economy, Finances, B …
Caye International Bank
Learn more about banking and business laws in Belize
As more people look to make smart decisions about their money, offshore banking strategies rise to the top of the options list. Whether you’re planning to retire internationally, invest overseas, or move your business offshore, banks in Belize can be a smart choice. Thanks to banking laws in Belize, there is an inviting financial climate for investors and account holders from around the world. Take a closer look at some of
11-15-2018 | Business, Economy, Finances, B …
Caye International Bank
Make the Most of Your Foreign Savings Account in Belize
A savings account, also known as a deposit account, is a way to safely store your assets and benefit from interest accumulation at the same time. Although many people have domestic savings accounts, having a foreign savings account also offers several concrete advantages. If you are thinking about opening a foreign savings account, find out how to do so as well as understand what you can do with your account. What is
08-09-2018 | Business, Economy, Finances, B …
Caye International Bank
Diversifying Assets Through Offshore Banking in Belize
There are countless strategies for investment. Some individuals look for high-risk and high-reward opportunities, and others want to plan for long-term security. Whatever the strategy, however, diversification is key. In fact, that might be the most important factor in successful asset protection and investment. One of the best ways to diversify assets is through offshore banking. Explore the need for financial diversification, better understand all your offshore options, and work toward
08-07-2018 | Business, Economy, Finances, B …
Caye International Bank
Why Choose Private Offshore Banking in Belize
Private offshore banking in Belize continues to increase in popularity. Through its continual demonstration of banking compliance with financial industry laws and legislation such as the Foreign Account Tax Compliance Act, or FATCA, Belize has established itself as a leader in safe, stable international banking locations. It is entirely normal to have questions about the privacy and stability of offshore banking in Belize when other banking options exist. Recently, Luigi Wewege,
08-03-2018 | Business, Economy, Finances, B …
Caye International Bank
Five Advantages of Offshore Banking in Belize
If you’ve considered banking offshore in the past, then you might have explored the options for international banking in various countries. One nation that comes up again and again among savvy investors is Belize. Belize is already a popular location for vacations and retirement, and it continues to grow in popularity as an offshore banking destination. There are a multitude of advantages to banking in Belize, but let’s take a closer
08-15-2017 | Business, Economy, Finances, B …
Tri-County Regional Black Chamber of Commerce
October 2017 - Trade Mission To Belize
FOR IMMEDIATE RELEASE Media Contact: Leondria R. Thompson Email: Press@tcbcc.org 1+-832-875-3977 October 2017 - Fourth Quarter Business Development and Investment Opportunity Trade Missions to Belize, Central America August 14, 2017, Houston, Texas USA – Tri-County Regional Black Chamber of Commerce (TCRBCC) will host its fourth quarter International Business Development and Investment Opportunity Trade Mission in Belize for October 10-14, 2017 and October 17-21, 2017. TCRBCC’s third quarter trade mission to Belize, July 18-22, 2017, resulted
Comments about openPR
OpenPR is clearly structured and remains true to its principle of confining itself to the essential parts. OpenPR has proven to be a very good and reliable partner to our media agency: Within the shortest time the releases are online and go down well with the media representatives. The success of OpenPR is reflected in the steadily increasing number of press releases. It is good that OpenPR exists!
Ursula Koslik, Director Marketing & PR, F+W Hamburg