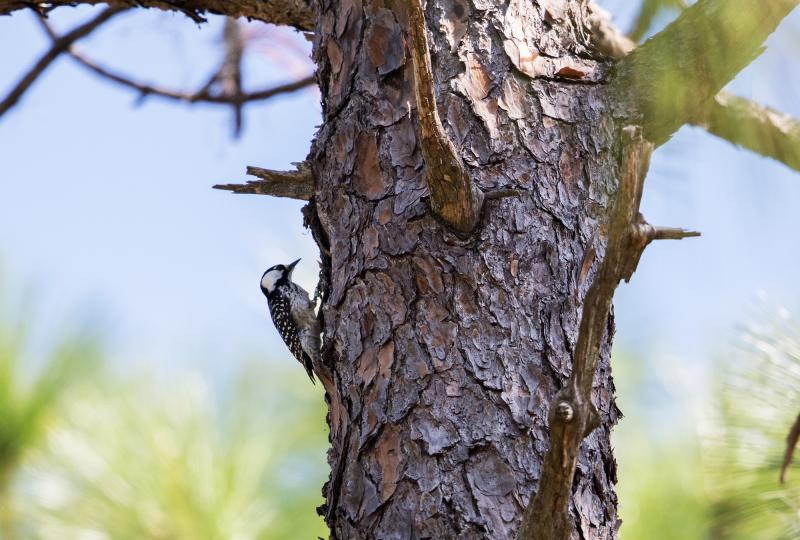 Jacksonville, Fla., July 8, 2019 – A red-cockaded woodpecker (RCW) captured at Camp Blanding in Clay County is evidence that a project led by North Florida Land Trust to preserve land within the Ocala to Osceola (O2O) wildlife corridor is working. The capture of that species of bird isn’t unexpected; the birds are known to live on the military installation. The unusual thing about this particular bird is where it came from, the Osceola National Forest 27 miles away. The bird captured at Camp Blanding was the first time this endangered species had moved between one of the national forests and the military installation since they began banding and recording the birds over 25 years ago. Red-cockaded woodpeckers (RCW) are a federally endangered species that were once common across the southeast but now are restricted to certain pockets where the last stands of their forest habitat remain. The birds are reliant on old-growth longleaf pine to survive, which was once common but now only exists across three percent of its original range. As the old-growth forests were cut down, the birds retreated to those few pockets of forest left, in places like the Osceola and Ocala National Forests, and Camp Blanding. The woodpeckers are non-migratory and typically don’t go very far from their home forest stand. “The migration of this one little bird is a big deal because it proves the populations we have in the O2O want to move and expand over the landscape to find other red-cockaded woodpeckers to reproduce,” says Jim McCarthy, president of NFLT. “Helping them to do that is exactly the goal of our O2O Wildlife Corridor project.” The O2O project is a more than 100-mile long wildlife corridor NFLT and their partners are creating to connect wildlife in Ocala National Forest in Central Florida to Osceola National Forest in North Florida by way of existing protected areas like Camp Blanding. There are also some lands that haven’t been protected yet that the land trust and its partners are working on preserving. The creation of this wildlife corridor has been a group effort with now more than 18 conservation agencies and nonprofits participating, including groups like the National Forest Service, Florida National Guard and USDA’s Natural Resource Conservation Service.“That was a tough voyage for that woodpecker because none of it's habitat exists between here and Osceola,” says Paul Catlett, the environmental manager for Camp Blanding. “It would have endured a number of nights exposed, in the open, with poor forage to survive on.” The O2O partnership is working together to change that for the benefit of not only the RCWs but all wildlife in North Florida. The group is working to preserve a continuous corridor of land between Ocala and Osceola, and restore the old-growth longleaf pine habitats that used to be there, creating a ribbon of Old Florida that spans a third of the state, North to South. Wildlife would be free to migrate, forage for food and mate in a way that is natural to their species, and it will help endangered species like the RCW recover.Catlett said, “The reality is a number of woodpeckers have probably left Ocala, Osceola and Camp Blanding before, searching for good habitat and simply didn’t make it. This bird is extremely lucky to find a place that could support it.” The land trust and their partners are currently working with private landowners in the O2O, either to preserve their land through conservation easements, or sales of their land for new parks and preserves. They are also working with landowners who want to restore longleaf pine forests on their land with each partner working towards that goal. “These public-private partnerships can have an impact that’s well beyond what the Federal government could accomplish on its own,” says Russell Morgan, Florida NRCS state conservationist.The Natural Resources Conservation Service entered in a formal partnership with the land trust for $3,560,000 for 2018-2022 through the Regional Conservation Partnership Program to purchase easements and provide financial assistance to private landowners who are interested in restoring longleaf pine on their land. The partnership has so far been successful in preserving thousands of acres of land but have tens of thousands of acres to go. As McCarthy said, “The reality is that preserving the land, while difficult and expensive, is the quick part. Restoring tens of thousands of acres of old-growth forest will be the work of generations.”North Florida Land Trust 843 W. Monroe St. Jacksonville, FL 32202 Media Contact: Kelly White Kelly@kwhitecommunications.comAbout North Florida Land Trust North Florida Land Trust is a nonprofit organization that champions environmental protection in its primary, 11-county focus area of Baker, Bradford, Clay, Duval, Flagler, Nassau, Putnam, St. Johns, Union, Columbia and Volusia counties. NFLT was founded in 1999 and has protected thousands of acres of environmentally significant land including property at Big Talbot Island, Ortega River, Guana River, Little Orange Creek, Keystone Heights and, along the St. Mary’s River and other valued natural areas predominantly in Northeast Florida. NFLT is funded largely by private and corporate contributions and works closely with private landowners and public agencies at all levels of government, not-for-profit partners, and foundations. For more information, visit nflt.org.