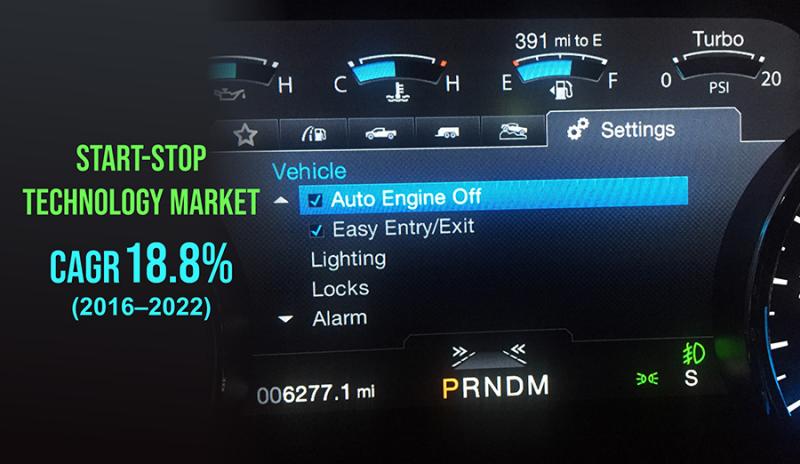 According to a new market research report “Global Start-Stop Technology Market Size, Share, Development, Growth and Demand Forecast to 2022 - Industry Insights by Product (Enhanced Starter, Belt-Driven Alternator Starter, Direct Starter and Integrated Starter Generator) published by P&S Intelligence, the global start-stop technology market is projected to reach $7,058.0 million by 2022, growing at a CAGR of 18.8% during 2016 - 2022.Global start-stop technology market worth $2,100.2 million in 2015The study suggests that the global start-stop technology market is likely to grow from $2,100.2 million in 2015 to $7,058.0 million by 2022. Stringent emission control norms, increasing need for fuel efficient vehicles and increasing adoption of hybrid vehicles are that factors that are expected to drive the demand for start-stop technology over the forecast period.Insights on market segments As per the findings of research, the enhanced starter was the largest contributor to the global start-stop technology market in 2015, in terms of volume and value; however, the integrated starter generator is expected to witness the highest growth, during the forecast period in terms of volume and value.Enhanced starter and integrated starter generator-based start-stop systems are expected to dominate the market in future, and are expected to be used widely in passenger cars. Enhanced starter and integrated starter generator are more cost-effective and fuel efficient clean energy technologies as compared to direct starter and belt-driven alternator starter technologies.Request to Get the Sample Report@ https://www.psmarketresearch.com/market-analysis/start-stop-technology-market/report-sample Europe stands as the largest start-stop technology market Geographically, Europe has been the largest market for start-stop technology, where the U.K. has been the largest contributor to the regional market. China is the major market in the Asia-Pacific region, while the U.S. remains the highest revenue generator in the North American Market. In the Rest of the World, Brazil was the largest market in the Latin American and the Middle-East and African countries.Increasing need for fuel efficient vehicles bolsters market growth The factors driving the growth of the market include increasing need for fuel efficient vehicles and stringent emission control norms globally. In North America, Environmental Protection Agency (EPA) introduced emission standards for cars and light trucks. According to the target set by EPA, the permissible emission from a passenger car should not exceed 225 grams per mile (g/mi) in 2016. The planned permissible emission limits for passenger cars is 143 g/mi for 2025 in North America. Additionally, the permissible combined fuel economy for cars and trucks was 35.5 miles per gallon (mpg) for 2016, which is expected to increase up to 54.5 mpg by 2025 in North America. According to the government regulation in Europe, the average emission level from new cars reduced by 160 grams per kilometer (g/km) during 2006 - 2012. The regulation requires reducing the emission levels from new cars to 95 g/km by 2020. Such stringent regulations have resulted in increasing use of start-stop technology by automobile manufacturers.Make Enquiry Before Buying the Report@ https://www.psmarketresearch.com/send-enquiry?enquiry-url=start-stop-technology-marketTop six players account for major market share The research states that the global start-stop technology market had a consolidated structure in 2015, where the top six competitors accounted for a major share of the market. Some of the key players in the global market include: 1- DENSO 2- Delphi 3- Johnson Controls 4- Hitachi 5- Mitsubishi Electric Automation, Inc 6- Valeo 7- BorgWarner Inc.Contact: P&S Intelligence Toll-free: +1-888-778-7886 (USA/Canada) International: +1-347-960-6455 Email: enquiry@psmarketresearch.com Web: https://www.psmarketresearch.comAbout P&S Intelligence P&S Intelligence is a provider of market research and consulting services catering to the market information needs of burgeoning industries across the world. Providing the plinth of market intelligence, P&S as an enterprising research and consulting company, believes in providing thorough landscape analyses on the ever-changing market scenario, to empower companies to make informed decisions and base their business strategies with astuteness.

04-08-2020 | Advertising, Media Consulting, …
P&S Intelligence
Revenue Explosion Expected in Global Horticulture Lighting Market during 2020-20 …
One of the biggest factors fuelling the growth in the demand for horticulture lighting across the world is the rising need for food items, on account of the surging population level. According to the United Nations, the global population level is set to increase from 7.7 billion in 2019 to 8.5 billion in 2030. Get Sample Copy of Report : https://www.psmarketresearch.com/market-analysis/horticulture-lighting-market/report-sample Due to the huge population boom, especially in India, China, Brazil,
04-08-2020 | Business, Economy, Finances, B …
P&S Intelligence
Increasing adoption of security solutions by banks to support digitization is dr …
Digital transformation has been a major advancement in the recent years, which has aided in enhancing the customer experience; however, this has also resulted in an increase in cyber-attacks. The financial service industry, specially, is among the most lucrative targets for cybercriminals, as the industry deals with financial assets and a large amount of unstructured data. Furthermore, due to the adoption of technologies such as online banking, the chances of
04-08-2020 | Business, Economy, Finances, B …
P&S Intelligence
Green technology and sustainability market is growing due to rising demand for l …
Due to the rising awareness about the harmful effects of greenhouse gas emission on the environment, the need for low-carbon electricity is increasing, which is driving the global green technology and sustainability market. Governments and utility firms around the world are focusing on generate power from renewable sources like the sun, wind, and water, to reduce the carbon footprint. By employing artificial intelligence (AI), the created energy can be stored
04-08-2020 | Business, Economy, Finances, B …
P&S Intelligence
Latin America Wound Dressing Market to Register a 4.6% CAGR during Forecast Peri …
As per a report by P&S Intelligence, in 2018, the LATAM wound dressing market generated a revenue of $309.1 million and is expected to grow at a 4.6% CAGR during the forecast period (2019-2024). Traditional and advanced are the two types of wound dressing, between which, advanced wound dressing products were utilized the most during 2014-2018. This is because of the innovative applications in the treatment of wounds and rising