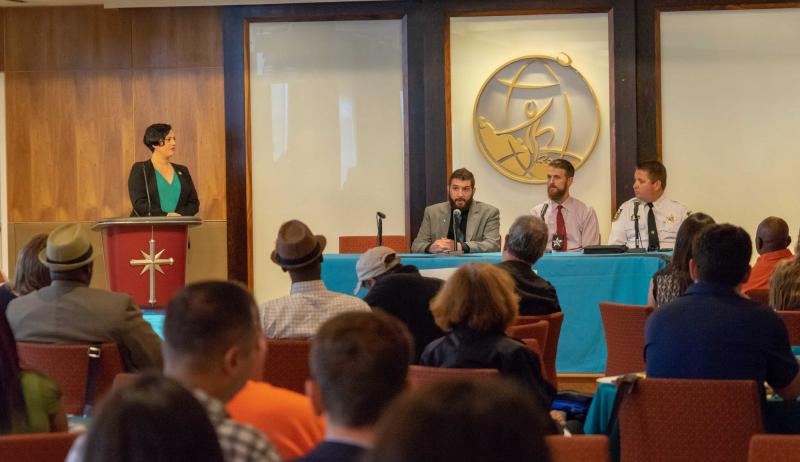 Tampa, FL – In recognition of June 26th UN International Day Against Drug Abuse and Illicit Trafficking, the Florida chapter of the Foundation for a Drug-Free World (FDFW) will be holding a luncheon and “resources fair” on June 26th, 2019 at 11:30AM. The event is being hosted at the Church of Scientology of Tampa in Ybor Square at 1300 E. 8th Ave, Tampa, FL 33605. Pastor Basha Jordan from Hope Alice Outreach (who has his own addiction story) and Pastor Moses Brown from Feeding Our Children Ministries (who has been educating youth on the dangers of drugs for many years), will both we guest speakers at the event. Julieta Santagostino, the President of FDFW Florida Chapter will be the MC of the event. Several non-profits and organizations with information and resources that can be used to educate youth on the dangers of drugs, as well as how to help those already addicted to drugs will be present and offer their materials. The Center for Disease Control and Prevention (CDC) estimates in 2017 there were nearly 200 drug overdose deaths a day in the US, about 72,000 a year. This is more than the number of U.S. troops who died in the entire Vietnam War. “Drugs don’t discriminate. They affect people of all walks of life” said Julieta Santagostino the President of FDFW Florida Chapter. “It’s important that we come together and make our resources available and work together to handle this problem.” The Foundation for a Drug-Free World provides free drug education materials to anyone who would like to help educate other and these will be available at no cost at the event on June 26th. These include 14 different information booklets on the most commonly abused drugs and a documentary DVD “Real People Real Stories.” The event is complimentary and lunch will be served. To RSVP and reserve your seat call 727-467-6962 or email info.fl@drugfreeworld.orgJulieta Santagostino Foundation for a Drug Free World 41 N Fort Harrison Ave Clearwater, FL 33755About Foundation for a Drug-Free World:The Foundation for a Drug-Free World is a non-profit organization that educates youth and the community on the truth about drugs, so they can make the right decision to live drug-free. The Church of Scientology is a sponsor of the program making it possible for the Foundation to provide educational materials at no cost to educators, law enforcement and the community. Humanitarian L. Ron Hubbard, said, “The single most destructive element present in our current culture is drugs.”About UN International Day Against Drug Abuse and Illicit Trafficking:The UN International Day Against Drug Abuse and Illicit Trafficking is a United Nations International Day against drug abuse and illegal drug trade. It is observed annually on 26 June, since 1989. The observance was instituted by General Assembly 42/112 of 7 December 1987. This day is to mark the importance of the fight against drug abuse and illicit trafficking. oOo