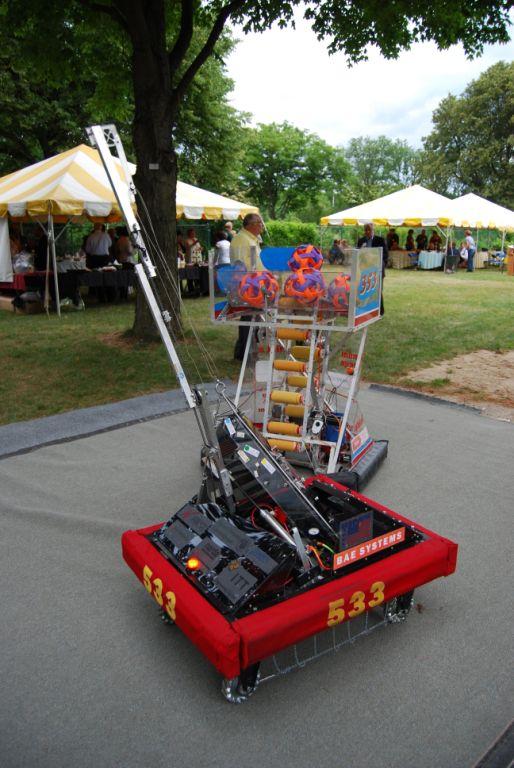 (Kings Park, NY) — School-Business Partnerships of Long Island, Inc. (SBPLI) will be hosting the Robots & Roses Scholarship Reception on June 23 at Farmingdale State College’s Ornamental Horticulture Teaching Gardens, starting at 5:30 p.m.Robots & Roses is a fundraising event with proceeds going to benefit the Fred Breithut Scholarship Fund, which is named in honor of SBPLI’s Founder and President who passed away on April 26, 2010. The Fred Breithut Scholarship was established in November 2009 in partnership with Farmingdale State College. It is for eligible graduating high school seniors who have met the academic requirements, have participated in the LI FIRST Robotics Program and will be entering the freshman class to pursue a degree in science, engineering or technology at Farmingdale State College. With Mr. Breithut’s passing, SBPLI wishes to keep his legacy alive by continuing to award the scholarship to eligible high school students. The Robots & Roses Scholarship Reception will help in maintaining sufficient funds to provide scholarships to new incoming freshman students at Farmingdale State College each year, as well as for the students as they proceed through their four years of college.“Fred lived a life that is a model for all of us,” said Scott Schuler, Acting President, SBPLI. “He always had the vision, persistence and tireless devotion to moving our organization forward.”Those who attend are asked to contribute $50 or more, with all proceeds going directly towards the Fred Breithut Scholarship Fund. Anyone who cannot attend but wishes to contribute may make a donation to the fund.To RSVP and to donate, send your tax-deductible contribution to SBPLI, Inc., Attn: Joani Madarash, P.O. Box 101, Kings Park, NY 11754 on or before June 17. Please make checks payable to Farmingdale State College Foundation with “The Fred Breithut Scholarship Fund” written in the memo.For more information, call Joani Madarash at (631) 360-2753 or email: jmadarash@accesslinx.com. For more information on SBPLI, visit www.sbpli-lifirst.org.About School-Business Partnerships of Long Island, Inc. The Long Island FIRST Regional Competition is run by the School-Business Partnerships of Long Island, Inc. (SBPLI). SBPLI was founded in 1984 by Fred Breithut with the goal of developing partnerships between local high schools and businesses that would provide students with practical experience and curriculum development, while helping the business community develop its future workforce. Over 100 partnerships have been formed. In 1999, Long Island FIRST was formed for the purpose of developing a Long Island Regional FIRST Competition. In 2000, 14 high school teams participated. The Long Island Regional has since grown with 48 teams participating in 2010. On January 8, 2011, registered teams were provided with supplies and the competition's game rules. The 2011 Competition was held at Hofstra University on March 24-26, 2011.Hank Russell, Public Relations Director PRMG 156 North Ocean Avenue Patchogue, NY 11772 631-207-1057 hrussell@theprmg.com