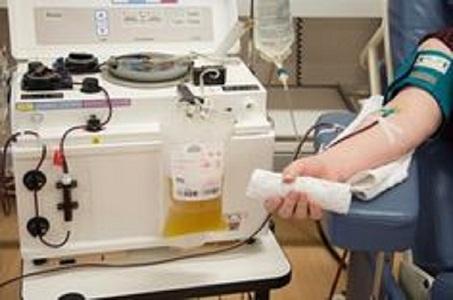 The Global Apheresis Market was valued at $2,560.4 million in 2016, and is projected to reach $4,200.6 million by 2023, growing at a CAGR of 7.3% from 2017 to 2023. The disposable & reagents segment accounted for four-ninths of the total market share in 2016.Apheresis system assists in the collection and separation of blood components for donation. In addition, this system can perform removal or exchange of blood components for therapeutic procedures. The American National Red Cross offers various therapeutic apheresis services across the U.S. that include plasmapheresis, photopheresis, LDL apheresis, and stem cell harvest. In addition, the center has employed qualified and specialized staff for apheresis procedures while maintaining the accessibility and availability regarding the same. Increase in the number of such blood centers across the globe significantly drives the growth of the apheresis market.Download PDF Report Sample @ https://www.alliedmarketresearch.com/request-sample/2855Asia-Pacific is expected to witness the highest growth rate throughout the forecast period, due to its high population base, upsurge in disposable income, and rise in patient awareness towards blood donation. In addition, increase in incidence of dengue across countries in the Asia-Pacific region is the key contributor for the market growth in the region.The major company profiled Are: • Haemonetics Corporation • Fresenius Kabi • Terumo BCT, Inc. • Asahi Kasei Medical Co., Ltd. • HemaCare Corporation • Kaneka Corporation • Kawasumi Laboratories Inc. • Cerus Corporation • B. Braun Melsungen AG • Nikkiso Co., Ltd. Other prominent players in the value chain include:• Grifols International SA • Baxter International Inc. • CSL Behring • Immucor • Becton • Dickinson & Co. • Abbott Laboratories • Medicap • Bioelettronica.Get a purchase enquiry @ https://www.alliedmarketresearch.com/purchase-enquiry/2855In addition, rise in government initiatives that promote blood donations in the developing countries such as China and India propels the market growth. For instance, Twitter has recently launched a social initiative called BloodMatters in India on March 2018. Twitter has collaborated with the voluntary blood donation helpline named Blood Donors. Moreover, increase in number of blood donations was observed in China in 2014, which led to increase in the number of blood centers in the country. Such circumstances positively impact the market growth.The centrifugation method generated the highest revenue in 2016, and is expected to maintain this dominance throughout the forecast period. This is attributed to the fact that centrifugation is considered to be a standard method for apheresis, and is highly favored by the blood industry across the globe. However, the membrane separation segment is expected to register the highest growth rate during the forecast period, owing to rise in demand for membrane separation apheresis, as it prevents the need for replacement fluids by not depleting the blood coagulation factors.Access Full report @ https://www.alliedmarketresearch.com/apheresis-marketBased on procedure, the market is divided into donor/automated apheresis and therapeutic apheresis. Donor/automated apheresis is anticipated to dominate the global market throughout the forecast period, due to increase in gap between blood supply and blood products, which facilitate the need for using apheresis machines. Moreover, rise in apheresis procedures across several specialties such as hematology, neurology, and oncology has contributed towards the robust growth displayed by this segment. The therapeutic apheresis is expected to grow at the highest rate from 2017 to 2023.Key Findings of the Apheresis Market:• The platelets (plateletpheresis) segment is expected to register the highest growth rate from 2017 to 2023. • Blood centers accounted for maximum revenue in 2016, and is anticipated to maintain this trend throughout the forecast period. • North America dominated the global apheresis market, accounting for maximum share in 2016, and is expected to retain the same trend during the forecast period. • Intermittent flow centrifugation segment dominated the centrifugation apheresis market in 2016 and is expected to maintain this trend during the forecast period. • Photopheresis is estimated to exhibit the highest CAGR of 9.3% from 2017 to 2023 in the therapeutic apheresis market.Contact:David Correa 5933 NE Win Sivers Drive #205, Portland, OR 97220 United States Toll Free (USA/Canada): +1-800-792-5285, +1-503-894-6022, +1-503-446-1141 UK: +44-845-528-1300 Hong Kong: +852-301-84916 India (Pune): +91-20-66346060 Fax: +1?855?550-5975 help@alliedmarketresearch.com Web: www.alliedmarketresearch.comAbout Us:Allied Market Research, a market research and advisory company of Allied Analytics LLP, provides business insights and market research reports to large as well as small & medium enterprises. The company assists its clients to strategize business policies and achieve sustainable growth in their respective market domain.Allied Market Research provides one stop solution from the beginning of data collection to investment advice. The analysts at Allied Market Research dig out factors that help clients to understand the significance and impact of market dynamics. The company amplies client’s insight on the factors, such as strategies, future estimations, growth or fall forecasting, opportunity analysis, and consumer surveys among others. As follows, the company offers consistent business intelligent support to aid the clients to turn into prominent business firm.

04-12-2018 | Health & Medicine
TMR Research
Apheresis Equipment Considerable Market Share by 2025
Global Apheresis Equipment Market: Snapshot An apheresis machine comprises of a gadget or device which gathers blood removed from the body of the donor and separates it into the diverse components, for instance, platelets, plasma, platelets, red and white platelets. Contingent upon the reason, the apheresis procedure is required, one of these parts can be effortlessly segregated and gathered by the gear, while alternate segments are sent back to the body.
03-12-2018 | Health & Medicine
Medical Device
Apheresis Market – Global Industry Insights, Trends
Apheresis is a procedure of blood purification and blood component separation by using centrifugation or membrane filtration technology. This procedure is performed for blood donation component or for the treatment of disease. In this procedure, the blood is extracted from the patient or from the donor’s body with the help of the apheresis machine and desired blood components are separated on the basis of their molecular size and weight. The
01-30-2018 | Health & Medicine
MedAware Systems, Inc.
MedAware Systems Launches Comprehensive Apheresis Research Database
MedAware Systems, Inc. announced today it is launching the world’s most comprehensive database of evidence on Apheresis, available through its SOHInfo™ division. Data have been meticulously extracted from over 2,300 clinical trials, cohort studies, registries, reviews and other published works, spanning medical journals worldwide. The Company continuously updates this database as new studies are published. Apheresis is a medical technology in which the blood of a donor or patient is
07-06-2017 | Health & Medicine
Persistence Market Research
Apheresis Equipment Market Estimated to Flourish by 2016 - 2024
Apheresis is a procedure in which the blood is passed through equipment in which one component of the blood is centrifuged and the remainder component is returned back to the donor’s or patient’s circulation. For example during blood donation using apheresis equipment, the procedure involves separation and collection of the plasma or platelets, while returning red blood cells back to the donor blood stream. There are different types of procedures
06-08-2017 | Advertising, Media Consulting, …
MarketResearchReports.biz
Global Apheresis Market: Top Manufacturers - HemaCare Corporation, Kaneka Corpor …
Latest industry research report on: Global Apheresis Market : Industry Size, Share, Research, Reviews, Analysis, Strategies, Demand, Growth, Segmentation, Parameters, Forecasts Download Sample copy of this Report at :http://www.marketresearchreports.biz/sample/sample/1026282 This report studies the global Apheresis market, analyzes and researches the Apheresis development status and forecast in United States, EU, Japan, China, India and Southeast Asia. This report focuses on the top players in global market, like Haemonetics Corporation
03-26-2017 | Health & Medicine
Transparency Market Research - Medical Devices
Apheresis Market (Therapeutic Apheresis & Donor Apheresis): Trends, Opportunitie …
Global Apheresis Market: Overview Apheresis, also known as pheresis and hemapheresis refers to a procedure that comprises extraction of blood from a donor and separating and preserving its components such as leukocytes, platelets, and plasma. Henceforth, the rest of the components are transfused back into the body of the donor. In this process, several abnormal components are also removed from the blood. The apheresis market is categorized from both the therapeutic
Comments about openPR
We publish our press releases on openPR.de because we like people who are "open" - just like us.
Frank Obels, CEO, INCONET - Informationssysteme, Communication und Netzwerkberatung GmbH