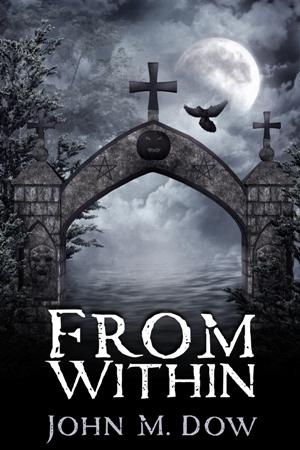 John M. Dow, an author from Scotland, has just released his first novel on the Amazon Kindle Store. 'From Within' is a story of gripping terror, unashamedly written in the style made popular by James Herbert and Dennis Wheatley. With a significant number of sales now under his belt, John has already written his second novel, a dark fantasy story, and is hard at work on his third.On From Within:"They stopped, looking around, trying to pinpoint the source of their discomfort. The tension in the air suddenly snapped, released, and with a series of staccato bangs, every door down the length of the street swung open.From out of the houses and shops they came, shuffling, staggering, and swaying. Fly-by-wire humans, jerking along the street like meat marionettes, with mouths agape and eyes empty. In their suits and their dresses, overalls, smocks and pyjamas, the locals of Wakely marched to their own rhythm of decay to greet the visitors to their town."Three strangers find themselves drawn to Wakely, a small village in the Scottish Borders, where a centuries-old conflict between two warring Celtic deities is drawing to its gruesome conclusion. A small boy holds the key to their survival, but first they have to find him. And they're not the only ones looking.John M. Dow was born in a small mining community in central Scotland and, other than a short stay in Australia, has lived there ever since.His life to date has been split evenly between writing and technology. His technology career pays the bills and the writing keeps him sane.To date, he has published reviews and articles for computing and video game magazines, as well as short stories.From Within is his first novel; a dark and frantic homage to the horror fiction of the 1970s and 1980s.His preferred genres are dark fantasy and horror, and promises never to feature sparkly vampires. His short stories have ranged from the blatantly surreal to the comedic, and he feels that humour has a very definite role to play in the modern horror novel.He is currently working on his second book, a dark fantasy documenting a conflict between immortals. The events therein stretch from ancient Babylon to the modern day.John M. Dow 34 Ballantyne Place Livingston Scotland EH546TG

You can edit or delete your press release Debut novel released on Kindle. here

03-09-2017 | Advertising, Media Consulting, …
Woodcote Media Ltd
Bioenergy conference comes to Scotland
Edinburgh has been chosen as the host city for this year’s Bioenergy Insight Conference & Expo 4-5 October. According to the European Union’s 2020 objectives, bioenergy is expected to contribute half of the EU’s 20% renewable energy target. EU countries have already agreed on a new renewable energy target of at least 27% of final energy consumption in the EU as a whole by 2030. Bioenergy is expected to form a crucial part of these
03-11-2011 | Leisure, Entertainment, Miscel …
Geoff Selvidge Sales & Marketing Services
Ducati Race Legend Comes to Scotland...
The name Paul Smart may not be familiar to modern day bike-race fans but in 1972, Paul won the prestigious Imola 200 race and put the mighty Ducati factory firmly on the path to future World Superbike success. Although that Imola race was Ducati's first V Twin Superbike success, Paul rates beating Phil Read at the Hutchinson 100 at Brands Hatch shortly afterwards, as a greater achievement. A prolific racer to Grand
01-05-2011 | Fashion, Lifestyle, Trends
Green Recipes
Vegetarian Recipes from Scotland
Recipes from the first vegetarian restaurant in Scotland - Henderson’s of Edinburgh are the focus of Derek Collinson’s new vegetarian recipe blog - www.greenrecipes.biz launched today. Janet Henderson was the inspiration behind Henderson’s almost fifty years ago when she persuaded her husband, ex rugby internationalist James “Mac’ Henderson, to turn his farm into an organic dairy farm. Soon afterwards Henderson’s Salad table as it was known then was born. Henderson’s
11-17-2010 | Sports
Highland Ascent
Winter Walking and Skills Courses in Scotland
Highland Ascent has established itself as a quality sea kayaking and hillwalking provider in the Highlands of Scotland for the last few years. This winter the company has decided to expand into winter walking and mountaineering. They offer now multi day Winter Skills Courses for good value. The 2 Day Winter Skills Course will offer clients the ability to walk in the Scottish in the Winter. You will learn how to
11-15-2010 | Politics, Law & Society
lawfordkidd
Personal Injury Experts in Scotland
Around 1.2 million people die in road accidents and 50 million people get injured every year around the globe. If you are injured in an accident, it is always better to hire a personal injury lawyer instead of getting help from a public prosecutor. Lawford Kidd is a leading firm of personal injury solicitors in Scotland. Lawfordkidd have been awarded with the placement in 2009 Chambers Directory in the top
10-28-2010 | Arts & Culture
Stagevisions
Spirit of Scotland John Cashmore
On Thursday 4th November at 19:30 in the Johanniskirche in Düsseldorf, the British Opera star John Cashmore will be presenting his Scottish concert „Spirit of Scotland“. You may already know of John from his performances in NRW in Eric Woolfsons musical Gaudi, West Side Story, Bernsteins Mass and concerts with the WDR rundfunkorchester. This is the 5th tour station of Spirit and a chance to see this lovely concert full of
Comments about openPR
We publish our press releases on openPR.de because we like people who are "open" - just like us.
Frank Obels, CEO, INCONET - Informationssysteme, Communication und Netzwerkberatung GmbH