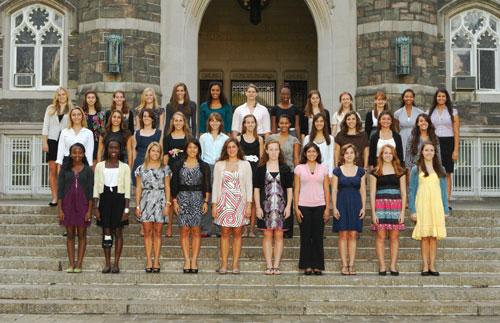 Ten Fordham University athletic teams were among more than 900 Division I squads to be publicly recognized by the NCAA for their latest Academic Progress Rate (APR) scores, posting multi-year APR scores in the top 10 percent of all squads in their respective sports. This is the second consecutive year that Fordham, which ranked tied for 18th nationally, has led the Atlantic 10 in the number of teams honored.The public recognition awards are part of the broad Division I academic reform effort. The APR provides a real-time look at a team's academic success each semester by tracking the academic progress of each student-athlete. The APR includes eligibility, retention, and graduation in the calculation and provides a clear picture of the academic culture in each sport.Being honored for the Rams are Men’s Cross Country, Women’s Cross Country, Men’s Soccer, Women’s Soccer, Men’s Swimming and Diving, Men’s Indoor Track and Field, Men’s Outdoor Track and Field, Women’s Indoor Track and Field, Women’s Outdoor Track and Field, and Women’s Tennis. Women’s Indoor Track and Field and Women’s Outdoor Track and Field have all been honored in each of the five years the NCAA has released scores, while women’s tennis is recognized for the fourth straight year and women’s soccer the third.“It is a great achievement for the ten teams that have been recognized by the NCAA, especially the two programs that have been acknowledged in each of the past five years,” said Executive Director of Athletics, Frank McLaughlin. “The individuals from these teams are great examples of how Fordham student-athletes successfully balance their academic and athletic pursuits and we are extremely proud of these teams for their excellence.”The NCAA honors are the latest academic accolades bestowed upon Fordham student-athletes. Last week, junior pitcher Jen Mineau was named the Atlantic 10 Student-Athlete of the Year for softball as well as Academic All-Atlantic 10, the second straight year she has garnered each award. Additionally, seven members of the water polo squad were named to the ACWPC All-Academic Team, 38 football players were named to the Patriot League Academic Honor Roll (the most among all League football schools), 108 student-athletes were named to the Atlantic 10 Commissioner’s Honor Roll (the most of any school in the conference), and 319 student-athletes were honored at the 2011 Breakfast for Champions for compiling a 3.0 cumulative GPA or higher. The 319 student-athletes honored represented over 50% of the student-athletes at Fordham and is the largest number of student-athletes to attend a Breakfast for Champions.Based on their most recent multiyear Academic Progress Rates, the 909 teams publicly recognized this year for high achievement represent 14 percent of the 6,385 eligible Division I teams. The list includes 525 women’s teams and 384 men’s or mixed squads. The awards are given annually to teams scoring in the top 10 percent in each sport with their APRs. The lists of recognized teams are available by a searchable database.Full APR scores for all Division I sports teams, including penalties for low-performing teams, will be released later this spring. NCAA President Mark Emmert said top-performing teams this year posted APR scores ranging from 977 to a perfect 1,000. The number of teams in some sports may exceed 10 percent depending on the number of perfect scores. Every Division I sports team calculates its APR each academic year, based on the eligibility, retention and graduation of each scholarship student-athlete. An APR of 925 projects to an NCAA Graduation Success Rate of approximately 60 percent.The most recent APRs are multi-year rates based on scores from the 2006-07, 2007-08, 2008-09 and 2009-10 academic years. Last year, a total of 841 teams were recognized. “Most student-athletes excel at balancing their academic and athletics commitments, yet each year there are those who perform at extraordinary levels,” Emmert said. “By achieving the highest levels of academic success as a team, these young men and women truly embody what it means to be a successful NCAA student-athlete.” The ten teams honored rank the Rams first among all Atlantic 10 schools and is the second most Fordham teams honored in the five years of the program (eleven teams were honored last year). Xavier is second in the conference with eight teams recognized while Dayton and George Washington had six teams honored.Of the 335 Division I colleges and universities, 239 institutions placed at least one team on the top APR list including 12 schools from the A-10. Eleven of those 12 schools from the A-10 had multiple teams garner distinction, while all 21 league-sponsored sports were represented by at least one program.Among the 31 Division I conferences, the Atlantic 10 Conference ranked fifth behind the Ivy Group (135), the Patriot League (82), the Big East Conference (77) and the Atlantic Coast Conference (61). This represents an increase of eleven A-10 teams from a year ago.“To be among the top five conferences in the nation is a true testament to the hard work and dedication of our student-athletes to perform at the highest level in the classroom,” stated Atlantic 10 Commissioner Bernadette V. McGlade. “I congratulate all our student-athletes for their continued success.”Seventeen A-10 student-athletes earned Academic All-America honors during the 2009-10 season, while 1,199 student-athletes were named to the Commissioner’s Honor Roll in the Fall of 2009 and 1,180 were recognized on the Commissioner’s Honor Roll for their work in the classroom during the Spring of 2010. To be listed on the Commissioner's Honor Roll, a student-athlete in an Atlantic 10-sponsored sport must have a 3.5 GPA or better (on a 4.0 scale) during the specified semester.Women’s tennis and men’s outdoor track and field had a league-high five A-10 teams honored, while men’s cross country, men’s indoor track and field and women’s outdoor track and field each had four schools receive recognition.Founded in 1841, Fordham is the Jesuit University of New York, offering exceptional education distinguished by the Jesuit tradition to approximately 14,700 students in its four undergraduate colleges and its six graduate and professional schools.Cirillo World 350 Seventh Ave. Suite 800 New York, NY 10001

10-23-2012 | Sports
Fordham University Athletics
Patrick Ewing To Receive Inaugural Johnny Bach Award At Fordham University Tip O …
Patrick Ewing will receive the inaugural Johnny Bach Award from Fordham University at the Men’s Basketball Tip-Off Dinner on Monday night, November 5, at the Grand Hyatt Hotel (Park Avenue at Grand Central) in New York. John W. Bach, FCRH ’48, a coaching icon on the collegiate, professional, and international levels, is one of the greatest basketball minds of all time. A defensive specialist, he has been credited with helping the