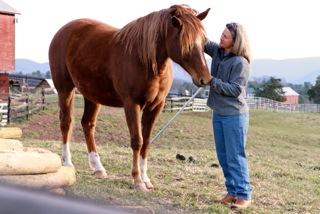 Fallow deer farming is a growing agricultural sector across the U.S. There are over a thousand fallow deer farms in Pennsylvania, and the Small-scale and Part-time Farming Project at Penn State, with support from the U.S. Department of Agriculture Extension Service, publishes a pamphlet explaining and advocating this relatively new agricultural sector. Fallow deer are smaller than whitetails, with fallow does weighing about 100 pounds and standing 25 to 30 inches high at the shoulder. Fallow deer are domesticated, and do not interbreed with wild deer. They can be raised on smaller acreage, are efficient converters of energy to meat, and there is a growing national and global market for this venison.In addition to the 1000 Pennsylvania venison farms, many using fallow deer, there are 20 such farms in Maryland, 60 in West Virginia, 70 in North Carolina, 55 in Kentucky, and 75 in Tennessee. Producing healthy food, often on smaller and otherwise unusable acreages, is not only an agricultural necessity but a great way to for Virginians to compete and prosper in the national and global marketplace. The obvious question is how many fallow deer farms do we have in Virginia? And the answer is … wait for it… just one. Deauville Farms in Bryce, managed by Gail Rose, is the sole fallow deer farm in Virginia, “grandfathered” by the state regulators when Virginia decided fallow deer were a Fish and Game concern, rather than a Department of Agriculture concern. She can’t sell breeding stock in Virginia because Va. Dept. of Game and Inland Fisheries declare fallow deer to be wild, and keeping wild deer in Virginia is illegal, subject to state fines and other punishment.Fallow deer have been domesticated and farmed since the 9th Century B.C. Their recent farming history in the United States can be traced to German farmers who sought an alternative and more profitable land use. Perhaps more importantly, fallow deer naturally resist disease and parasites, including chronic wasting disease. Every one of Virginia’s neighboring states farm fallow deer, profitably and efficiently. The Federal Department of Agriculture – itself a monstrosity of regulation, subsidy and waste and more regulation – promotes fallow deer production. The problem seems to be mission creep and bullheadedness on the part of the Virginia Department of Game and Inland Fisheries. The DGIF website specifically says there is no evidence of CWD or other disease concerns with domesticated fallow deer, but nonetheless, DGIF believes that deer are deer, and they must regulate.Beyond that, they also believe they must kill and destroy, as they did ten fallow deer that belonged to Stanley Holmes of Chesterfield on March 14, 2011.Virginians expect and condemn this kind of bureaucratic and anti-free market idiocy at the federal level. In this case, the problem is Richmond’s own rules, disconnected from reality and averse to freedom for Virginia’s farmers. In this economy, with a long, slow recovery to economic prosperity predicted, this Virginian has an easy question for Richmond’s “No Fallow Deer” bureaucrats. What planet are you from?Virginia’s farmers and producers deserve the right to farm fallow deer. Karen Kwiatkowski is a family farmer in Shenandoah County.CGS provides Professional Writing Services. Examples: Web content / E-commerce Business plans / Annual reports Brochures - Advertising - Direct mail Press releases / Speeches Employee handbook Ghostwriting Biography preparation Investigative reporting Editing (large or small projects)Write Consult LLC dba Common Growth Strategies PO Box 635 Ruckersville, VA 22968 703-338-0200 Joe Oddo joe@karenkforcongress.com

02-05-2019 | Politics, Law & Society
Write Consult LLC
Presidential Draft Committee Forms for 2008 Challenger Daniel Imperato
Daniel Imperato, an individual who put in enormous effort into running back in the 2006-08 is receptive to the idea presented by prior supporters to consider another bid in 2020. For many years Imperato has empahsized that, “we need government by ‘we the people, for we the people’. The fact is that special interests and corporate lobbyists have taken over D.C. and every state capital. Any candidate that uses either of
09-04-2013 | Associations & Organizations
Write Consult LLC
A Strategic Plan to Realize Dr. Martin Luther King’s Dream
An updated Universal, Common Strategic Plan for a Peaceful, Prosperous and Just World is being launched in coordination with the National Action Network’s Commemoration of the 50th anniversary of MLK’s “I Have A Dream” Speech at the 1963 March on Washington. This Plan, outlined on WethePeopleNow.org, proves that such a world is possible and shows how to achieve it. The August 24th launch is timed to correspond with thousands descending
05-24-2011 | Politics, Law & Society
Write Consult LLC
Congress Fails Once Again
The false drama on Capitol Hill over a net 1% cut of a budget that rose 27% in just the past three years was another clever trick designed to panic citizens over a possible government shutdown. Unfortunately, none of us are laughing about an unsustainable tsunami-style government, unchecked by law, ethics, or common sense. My ten-term congressman has proposed a Balanced Budget Amendment that according to his website, has
05-24-2011 | Politics, Law & Society
Write Consult LLC
The Price of Gas, and the Cost of Hot Air
The Senate recently berated the CEOs of Shell, ExxonMobil, BP America, Chevron and Conoco-Phillips for making record profits. The Senate, and perhaps many in Congress, would like to have $4 billion in tax breaks back, presumably on behalf of the American people. This same U.S. Congress presides over a tax code that is complicated and unfair to American individuals or small businesses that cannot afford to hire an army of

03-03-2020 | Sports
Libero Virginia
Libero Virginia Promotes New Coach Nadezhda Shulga
Libero Virginia is a proper place for everyone who wants to learn all about volleyball, a healthy lifestyle, and to develop a passion for sports. Its staff members are energetic and truly experienced professionals who got a new colleague these days. Namely, Nadezhda Shulga joined Libero Virginia's team. Coach Nada enjoys sharing her passion for volleyball with kids. Her wish is to help all players improve their skills. She is
04-03-2017 | Sports
Bow Tie Strategies
FC Barcelona Launches in Northern Virginia
Global soccer powerhouse, FC Barcelona, announced the official launch of the FC Barcelona ESCOLA Northern Virginia (FCBEscola) through their partnership with Sporting Global. April 22 is the unveiling of the FCBEscola Northern Virginia kicking off a series of events leading up to the high-profile match between FC Barcelona and Manchester United at FedEx Field on July 26 as part of the International Champions Cup 2017 US edition. “Our school in
06-13-2016 | Leisure, Entertainment, Miscel …
Kimberly Dalferes
Virginia Author Celebrates National Bathroom Reading Month
June, as our launching point for relaxation and summertime leisure, seems an appropriate month to celebrate the joys of bathroom reading. Who among us has not reached for our favorite quick read while reclining on the porcelain throne? In honor of this month’s celebration of the perfect reading retreat, Virginia humor writer Kimberly “Kimba” Dalferes has released her essay collection, "Crazy Southern Irish Gal Two-Book Bundle." “Today, I sit proud in
09-30-2011 | Business, Economy, Finances, B …
McBride Events
VIRGINIA WEDDING PLANNER SELECTED FOR NATIONAL CONFERENCE
RICHMOND, VA—Top Virginia Wedding Planner Jennifer McBride, owner of McBride Events, is thrilled to announce her return to the national event professional conference The Special Event this January 24-27, 2012, in Tampa, Florida, as she has been chosen to present: Time Crunch, managing the delicate balance between clients wants and the professionals involved needs on the BIG day Brides and their entourages are being bombarded with more and more opportunities and
02-04-2008 | IT, New Media & Software
Computer Sciences Corporation
CSC to Move Corporate Headquarters to Virginia
New Delhi, February 4, 2008 - Computer Sciences Corporation (NYSE: CSC) announced that its Board of Directors has approved a decision to relocate corporate headquarters to Falls Church, Va., from El Segundo, Calif. The relocation will consolidate into one geographical location the corporate executive leadership with the company's global operational headquarters. The consolidation will achieve enhanced productivity by reducing extensive travel now required between the two locations, facilitate the frequency
Comments about openPR
OpenPR is clearly structured and remains true to its principle of confining itself to the essential parts. OpenPR has proven to be a very good and reliable partner to our media agency: Within the shortest time the releases are online and go down well with the media representatives. The success of OpenPR is reflected in the steadily increasing number of press releases. It is good that OpenPR exists!
Ursula Koslik, Director Marketing & PR, F+W Hamburg