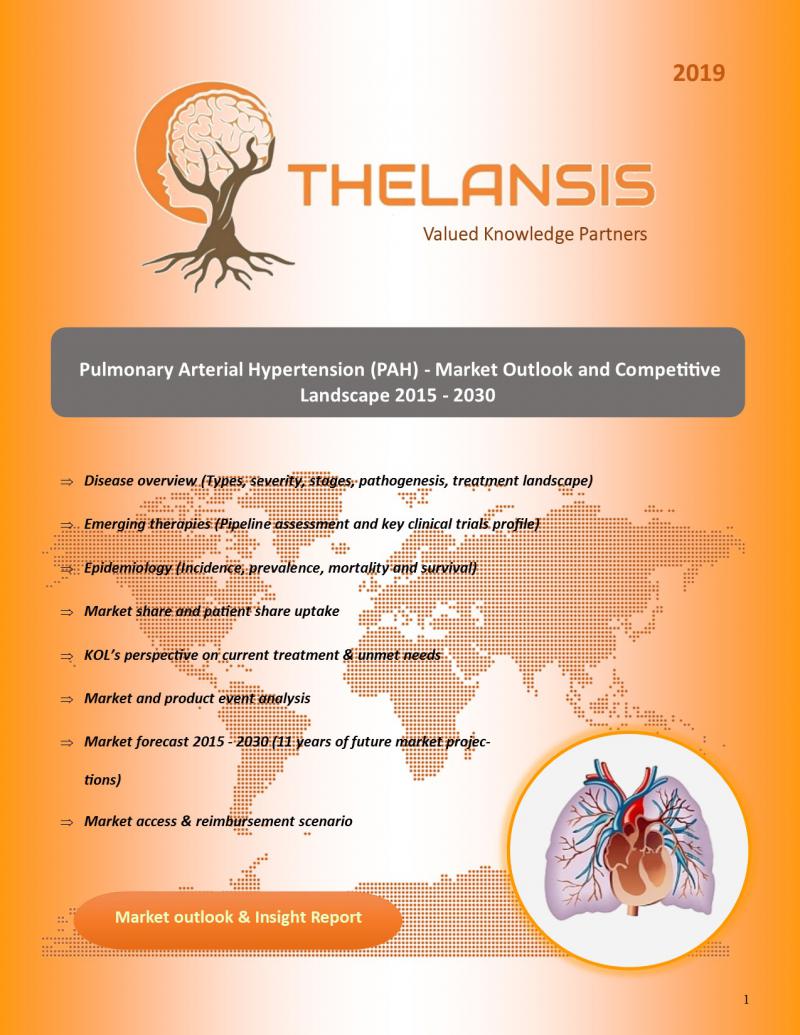 Report Overview
 The report provides a comprehensive view of disease events, types, severity, progression, symptoms, risk factors, pathogenesis and treatment guidelines at country level
 Comprehensive insight on patient segmentation has been provided into the epidemiology of the Pulmonary Arterial Hypertension (PAH) and its treatment in the 8 MM countries, covering the United States, EU5 (Germany, Spain, France, Italy, UK), Japan, and China
 Drug utilization and analysis on the current clinical practice, KOL perspective on upcoming therapies, estimated TPP for pipeline assets, clinical characteristics upcoming therapies and future treatment paradigm
 Market aggregation on a newly diagnosed patient pool, Thelansis estimation on persistence, compliance, adherence and a historic view of changing market dynamics and product-level patient flow of Pulmonary Arterial Hypertension (PAH) in the 8 MM Countries for the period 2015-2030
 A comprehensive record of both the present and rising treatments for PAH are provided, along with the impact of the new treatments and patent expiry on the current clinical practice and overall market level
 A detailed review of 8MM current and forecasted PAH market is included in the report, covering drug outreach in the 8 MM Countries based on their order of entry

Clinical Overview:
 Pulmonary hypertension (PH) is a hemodynamic and pathophysiological condition defined as an increase in mean pulmonary arterial pressure ≥ 25 mmHg at rest as assessed by right heart catheterization (RHC). While the progression of PH is highly variable, the disease is progressive and fatal in nature
 The clinical classification of PH categorizes multiple clinical conditions into five groups according to their similar clinical presentation, pathological findings, and hemodynamic characteristics. These are referred to different WHO functional classes
 Median word-wide survival for patients with primary PH is of 2.8 years and the survival rates at 1 and 3 years were observed to be 68% and 48%, respectively. However, the median survival is a little more for the US and EU-5 countries

Commercial Overview:
 PAH is an orphan indication with high competitive activity in the market and in pipeline alike. Janssen alone has two blockbuster products for PAH namely Opsumit and Uptravi
 The total market for PAH in 2019 stands >$5B WW among which 68% revenues are generated from the US alone
 From a regulatory perspective, data on mortality endpoints and reduced risk of hospitalization can provide an edge to the label. Historically products have got approval based on improvements in 6MWD and mPAP
 From a pricing and reimbursement perspective, the approved therapies in PH command a premium pricing. While coverage from payers is good in the US, EU follows a more policy stringent pathway for a few countries. Due to the genericization of the market, pharmacy benefit managers also play a key role in medication access

Current therapies:
 The current therapeutic landscape for approved therapies is dominated by Janssen (acquired portfolio from Actelion). Their PAH portfolio includes ERAs (macitentan, bosentan), PCs (selexipag, Iloprost, epoprostenol), While bosentan is now generic, Actelion has been largely successful in transitioning the patients from bosentan to macitentan (Opsumit). Macitentan is now eyeing a line extension in CTEPH. It is expected that Actelion will get approval for macitentan in CTEPH in Europe by H2’2019
 Other players are Bayer and United Therapeutics which have brands like Adempas (riociguat) and treprostinil portfolio respectively, Generic PDE5i including sildenafil and tadalafil also prescribed to PAH patients predominantly in the eastern hemisphere of the word vs the west

Emerging therapies:
 The PAH market landscape is pretty crowded with multiple therapies approved and many more in the pipeline, The therapies majorly fall under three categories of mechanisms which are Endothelin Receptor Antagonists (ERAs), Prostacyclin Analogs (PCs) and Nitrous Oxide Stimulants (NO). The NO pathway further includes medications working on the inhibition of PDE5 or soluble guanylate cyclase (sGC) stimulators
 One of the major unmet need in PAH is the lack of curative therapy. Several companies are coming up with innovative molecules like Acceleron Pharma’s sotatercept which acts on growth differentiation factor
 Several big pharma is also aiming at the market such as Novartis which is developing an inhaled prostacyclin QCC374
 PAH market is also populated by several treprostinil formulations which are largely provided by United Therapeutics. Some new entrants are also coming up with their treprostinil formulations such as Liquidia’s LIQ-861 which is an inhaled dry powder formulation of treprostinil
 United Therapeutics is also investigating gene therapy for PAH, however, as per Thelansis’ research, the likelihood of approval for that gene therapy is not very high
 PAH market is now moving more and more towards upfront dual and triple combinations which combine several mechanisms like ambrisentan + tadalafil from GSK which combines ERA and PDE5i mechanisms

KOL perspective:
“…...…..Emerging therapy needs to address the symptoms or associated conditions that have the greatest impact on the daily life of Patients such as shortness of breath and fatigue, followed by dizziness and swelling of the legs and ankles………….” (Pulmonary Medicine, Jefferson University Hospitals)

“…...…..Orthostatic intolerance, heart palpitation, chest pain, and PAH-triggered tiredness are the common challenges and concern to manage for on clinical practitioners in case of elderly patients; combination therapy needs to be introduced to address such conditions…………...” (Academic & Researcher, Division of Pulmonary & Critical Care Medicine, Stanford University School of Medicine )

“…………...A standardized treatment guideline to be enforced which will state the drug regimen to be prescribed as a combination therapy in ICU patients…………...” (Cardiologist,  Frankel Cardiovascular Center, University of Michigan)

“………..The current clinical classification and treatment guidelines have helped improve the standardization of PAH care in the clinical setting, however, there is huge knowledge gap among clinical practitioners needs to be addressed going forward……………..” (Cardiologist & Pulmonary Medicine, Frankel Cardiovascular Center, University of Michigan)

Payer’s perspective:
 From the payer’s perspective majorly focused on cost savings as both at public and private payer entities are seeking methods to reduce PAH related expenditures. The treatment of Pulmonary Arterial Hypertension (PAH) has changed dramatically since a few years. The payer’s and reimbursement agencies more concern about strong clinical outcomes data which have great evidence on managing the symptomatic conditions including quality of life
 The European nations regulatory bodies and payers are having a very conservative mindset with respect to the approval and access of non-potential assets, which will raise the country level disease burden as well as the treatment cost in coming years. Apart from cost, payers have also concerned the continuous recommendation of services (e.g., therapies or diagnostic tests) that have not demonstrated improvements in the outcomes that matter to patients

Thelansis, as the name depicts Thelansis is specialized in “Therapy Area Landscape Analysis” along with market intelligence and consultancy that supports pharmaceutical, biotechnology, and diagnostics companies to successfully prepare, launch, and commercialize their products. Our Syndicated research reports include Market Insight, Pipeline Insight, Product Insight, Specialized Reports, Indication Outlook, and Market Access Reports. Our focused therapeutic approach provides our clients with clinical and disease area expertise from an integrated team of academic, medical, and industry specialists of our panel, Ask for our report offerings, and Indication specific sample pages by sharing your email ID with us at,
clientsupport@thelansis.com

05-31-2019 | Health & Medicine
Thelansis Knowledge Partners
Charcot–Marie–Tooth_Market Outlook and Competitive Landscape Report 2018 – …
Report Overview  The report provides a comprehensive view of disease events, types, severity, progression, symptoms, risk factors, pathogenesis and treatment guidelines at country level  Comprehensive insight on patient segmentation has been provided into the epidemiology of the Charcot–Marie–Tooth (CMT) and its treatment in the 8 MM countries, covering the United States, EU5 (Germany, Spain, France, Italy, UK), Japan, and China  Drug utilization and analysis on the current clinical practice,
05-23-2019 | Health & Medicine
Thelansis Knowledge Partners
Thelansis "Crohn’s disease (CD) – Market Outlook and Competitive Landscape r …
Report Snapshot:  Crohn’s disease (CD) is a chronic disorder characterized by exacerbations and periods of remission that cause inflammation of the gastrointestinal (GI) tract. Although it can involve any area of the GI tract, it most commonly affects the small intestine and/or colon. Crohn’s disease and ulcerative colitis are the two main diseases among a group of illnesses called inflammatory bowel disease (IBD). The symptoms of these two
05-14-2019 | Health & Medicine
Thelansis Knowledge Partners
"NSCLC - Market Outlook and Competitive Landscape Report 2015 – 2030 "
Report Snapshot: NSCLC is the most common form of lung cancer, accounting for approximately 85% of all types and subtypes of lung cancer. It grows and spreads more slowly than small cell lung cancer. Early stage disease is associated with uncommon specific symptoms; hence roughly ~50% to 73% of cases are not being diagnosed until the disease is at an advanced stage when the chances for cure or significant patient benefit
05-10-2019 | Health & Medicine
Thelansis Knowledge Partners
"Gastric Cancer - Market Outlook and Competitive Landscape Report 2015 – 2030 …
Report Snapshot: • Gastric cancer is considered one of the leading causes of mortality in the world, Most of this burden occurs in developing countries. Among other type cancer gastric cancer is considered the most common type of upper gastrointestinal cancers, according to Globocan 2016, this disease was the fifth most common cancer with the incidence of about one million new cases in the world. It has indicated a significant change