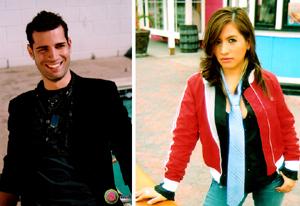 Singer and song writer Diana Mera and artist Frankie Alvarado from Puerto Rico record duet single "20 Pedacitos" (20 pieces) that will be the promotional track of Diana's second music album; this song will also be included in Frankie Alvarado's debut album to be recorded. SGM Records recently signed Frankie, making him the first La Academia USA singer to obtain a record deal. "When Frankie got to the label, I already had the performer chosen for the duet of "20 Pedacitos" but when I heard his voice, I stopped everything! I even postponed my recording dates to wait until he came back from Puerto Rico; I felt he was the angel that I needed for this song that I composed with Dany Tomas, who I respect immensely and who I thank for being an accomplice in my ideas and also for teaching me to fly confidently with my own style" said Diana. Frankie also commented that; "the experience to record was beautiful. "20 Pedacitos" is a very sentimental song and very significative for songwriter Diana Mera. I think people will be able to identify with the song and they will apply there own experiences" he added that "recording with Diana Mera was good and fulfilling. We had a great time at the studio, we joked and everything but always focused on the job". Mera, who is a direct descendent of writer and novelist Juan León Mera, composer of the national anthem of Ecuador said that Frankie made her laugh during the recordings and they got along wonderfully. "I recorded the song with 100°F fever and this kid made the recording sessions so much easier, I've got to know him a little bit and he is so spontaneous that no matter how sad you feel he'll get you to burst in laugh" Mera commented. "20 Pedacitos" finds it's genre in Pop Rock and slips in deep waters where the public will be able to touch their most intimate woes; Diana Mera wrote this song after a great friend of hers, who Diana considered her little sister passed away and that loss totally changed the way she viewed not only the music, but life itself. "Loosing Kaydee made my dreams crumble and especially those related to the music, we work together in various occasions, she recorded background vocals and a music video for my first album; after the one month mass, I got home and felt the need to write to her; that's how I wrote '20 pedacitos'", the "Bésame" composer said. SGM Records has produced the single "20 Pedacitos" with production genius Dany Tomas, who also stands out as a songwriter. "It is so good, I am very exited, I dare to say that this is one the best tracks that we have done together since this adventure started" Dany Tomas added. Gustavo Borner, supervisor of the production of this craft, was the first one to have faith that Frankie and Diana's duet will become a hit and SGM with the support of the best of the music industry will be launching the single "20 Pedacitos" in May, 2007. Record Label & Production Company, LLC Diana and Frankie are available for interviews: Soledad Herrada SGM Management PO BOX 14819 Long Beach, CA 90853 management@sgmrecords.net

09-13-2007 | Leisure, Entertainment, Miscel …
SGM RECORDS
Mariadela’s song Busca Tu Voz wins “Song of the Year” contest
Miami, FL 09/14/2007._ Prestigious contest “Song of the Year“ awards singer Mariadela as the winner of the best pop song of July’s round with her song “Busca Tu Voz” from her single EP “En Silencio”. The song will enter the annual round with the opportunity to become the best song of the year 2007. The experienced and renowned singer/songwriter Norah Jones was a member of the jury that reviewed “Busca Tu
03-14-2007 | Leisure, Entertainment, Miscel …
SGM RECORDS
Sgm Records Changes Frankie Alvarado Former La Academia Usa Contestant's Image
Los Angeles, CA.- Frankie Alvarado, former La Academia USA contestant recently signed an exclusive recording contract with SGM Records, Record Label & Production Company, LLC, label that has produced and broadcast singer and actress Diana Mera; previously it was said that SGM was in the process of changing Frankie’s image and they already have the final result. The prestigious stylist Haydee Salinas from Los Angeles, California, who has assigned the image
01-22-2007 | Arts & Culture
SGM RECORDS
Mariadela will launch her first single titled "En Silencio"
Miami, FL. - The Peruvian native singer Mariadela is getting ready for the release of her first single named “En Silencio” (In Silence), which is expected to win over the audience with this new music concept. The song “En Silencio”, selected as the title of the single, and the other two tracks of the single EP have been composed by Mariadela, these songs make a journey along a range of emotions,