Grow your business potential with Feed Premix Market To Reach 10,491.4 Million USD By 2023 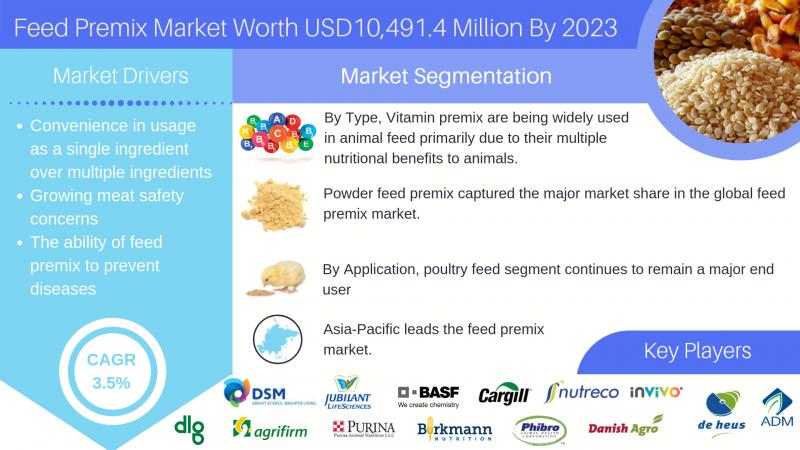 Moreover, emerging economies, particularly Southeast Asia, Latin America, and Africa are further boosting the growth of feed premix market and holds huge potential for future growth. The feed premix market is expected to gain effective support by the gradual shift from unorganized to organized livestock farming due to the strict and transparent regulatory policies on livestock and livestock-related products in these regions. However, regulatory structure and intervention and technical problems during storage and handling procedures hinder the growth of this market to some extent.

Vitamin premix are being widely used in animal feed primarily due to their multiple nutritional benefits to animals. In animal nutrition, they are required for optimum health and normal physiological functions such as growth, development, maintenance, lactation, and reproduction. Animal feed contain the highest level of supplemental vitamin as they are an integral part of fetal development and diets for adult breeder. However, nucleotide premix are set to be the emerging and rapidly growing type, primarily due to the increasing focus on nutritional supplementation to poultry birds and pets.

Powder feed premix captured the major market share in the global feed premix market, mainly attributed to their advantages over liquid form, such as better homogeneity, ease of handling, simple transport economics, and better stability of a premix. However, liquid feed premix are expected to witness a fastest growth in the next few years with their increasing demand for water soluble animal feed.

In 2017, poultry feed segment continues to remain a major end user, owing to large demand of poultry feed due to rising poultry meat consumption and poultry farming, especially in developing regions such as Asia Pacific and South America. However, aqua feed segment anticipated to show strong growth due to increasing focus on balanced commercial diets that promote optimal fish growth and health.

Meticulous Research® was founded in 2010 and incorporated as Meticulous Market Research Pvt. Ltd. in 2013 as a private limited company under the Companies Act, 1956. Since its incorporation, with the help of its unique research methodologies, the company has become the leading provider of premium market intelligence in North America, Europe, Asia-Pacific, Latin America, and Middle East & Africa regions.

You can edit or delete your press release Grow your business potential with Feed Premix Market To Reach 10,491.4 Million USD By 2023 here