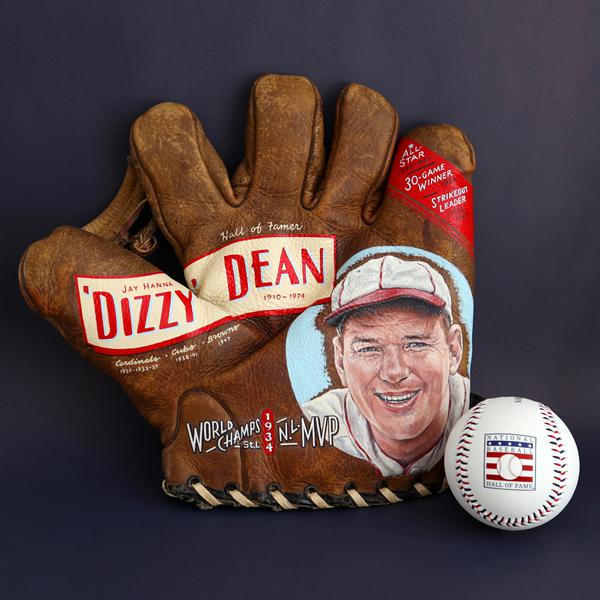 Painting on Vintage Baseball Glove Featuring "Dizzy" Dean Makes the Team at Cooperstown MuseumGUELPH, ONTARIO, CANADA April 29 , 2019 An artwork featuring Hall of Fame pitcher "Dizzy" Dean on a hand-painted, vintage baseball glove by Guelph, Ontario artist Sean Kane is now part of the collection at The National Baseball Hall of Fame and Museum in Cooperstown, NY.The painting was voted into the Hall of Fame collection by their Acquisitions Committee in early 2019. The artist hand-delivered the painted glove to the president of the Hall of Fame, Jeff Idelson, in March.Kane's acrylic painting highlights Dean, the eccentric, colorful Hall of Fame pitching ace of the St. Louis Cardinals from 1930-37. The "Gashouse Gang", as they were known, won the 1934 World Series during his MVP year. And like Dean, the artwork is slightly unconventional, having been painted on a 1930's era Spalding baseball glove instead of a typical artist's canvas.The Dean painted glove joins approximately 1,700 works of art in The Hall of Fame's collection, which began when the museum was founded in 1936 and includes works by Norman Rockwell and Andy Warhol.The Hall of Fame acquires "works of art that contribute to the Museum’s mission of preserving history, honoring excellence, and connecting generations", according to their website.The painting will be displayed in either the museum's art gallery or with Dean's game-used artifacts.A baseball fan since childhood, Kane says, "I'm incredibly honored having my work, my interest in the game and its history recognized by the Hall of Fame."He added, "For visitors to the Hall, if the painting sparks interest in Dizzy, the era he played in or prompts conversations between generations, then that's as good as a home run to me!"Kane has been a professional artist for 25 years, first as a commercial illustrator/designer before turning to baseball for inspiration. Originally from the Chicago area, he is now based near Toronto in Guelph, Ontario. Kane first got the idea to use baseball mitts as his canvas in 2001. "I think of them as a sort of time machine, helping to transport the viewer to the time and place of a ballplayer's career," he says. Each painting takes approximately 100-120 hours to complete, including research and sourcing antique mitts, some a century-old, from online dealers and sports memorabilia shows.Kane adds, "Layered with detailed portraits and graphics reminiscent of the era being depicted, I aim to tell a visual story that hopefully draws people in to learn more about the game and the individuals who played it."His baseball glove art has been commissioned by a range of baseball-related organizations including the Philadelphia Phillies, Milwaukee Brewers Fantasy Camp, the Cal Ripken, Sr. Foundation and Joe DiMaggio Children's Hospital.Kane's work is in the private collections of Hall of Fame players and individuals across the United States. Glove paintings have been exhibited at the Negro Leagues Baseball Museum, Kansas City, and the Sherwin Miller Museum of Jewish Art, Tulsa. The Dizzy Dean painting was created in 2016 and has previously been a part of a group exhibit in North Carolina. Kane's baseball glove art can be seen at his website, http://SeanKaneBaseballArt.com .Sean Kane’s artwork merges portraiture and hand-lettered designs with bygone baseball gloves, creating a connection to the era and story of the ball players he depicts. Sean's paintings reside in the collection of The National Baseball Hall of Fame & Museum, Negro Leagues Baseball Museum and numerous private and corporate collections including the Cal Ripken, Sr. Foundation, Philadelphia Phillies and Joe DiMaggio Children’s Hospital. His art has been exhibited at the Negro Leagues Baseball Museum, the Sherwin Miller Museum of Jewish Art and West Virginia University. The National Art Museum of Sport recognized Sean as an “Artist of the Month” in 2016. His works have been featured on ESPN.com, NBC Sports.com and MLB Network Radio.Sean is a Chicago native now living and working a long fly ball from Toronto. His work is online at SeanKaneBaseballArt.com.Sean Kane, Artist 33 Spring St Guelph, ON N1E1Z9 CanadaWeb & Hi-Res Photos/Info: http://www.SeanKaneBaseballArt.com/press-kit For more information contact: Sean Kane email sean@seankane.com tel 519-836-5647

07-18-2019 | Business, Economy, Finances, B …
Little Kingdom Childcare Georges Hall
Little Kingdom Childcare Georges Hall
At Little Kingdom Childcare Georges Hall we are committed to providing the highest quality long day care to the children at our centre. We are dedicated to focusing on each child’s social and psychological development as well as providing the best in early education, for children from 6 weeks to preschool. We see children as unique and capable individuals, who come to our service with their own interests, talents, skills,
09-27-2018 | Arts & Culture
Cultural Solidarity Media
Special Commemorative Concert at Cadogan Hall
Among the first of a season of events around the world to commemorate the centenary of the end of Great War is the ‘1918-2018: Centenary Reconciliation Concert’. Taking place at Cadogan Hall, in London, from the early time of 7pm on Wednesday 10th October, the programme features works from the last century offering opportunities for reflection and renewal, as well as celebrating the ultimate triumph of the spirit in adversity. Organised by
03-13-2018 | Advertising, Media Consulting, …
Transparency Market Research
Hall-effect Sensors Market - Increasing Application of Hall-Effect Sensors For A …
A Hall-effect sensor is as sort of transducer. The output voltage of a hall-effect sensor varies as a response to magnetic field. Proximity switching, positioning, current sensing along with speed detection are major application areas of hall-effect sensors.The sensor primarily follows the principal of analog transducer, and it directly returns the voltage. Hall-effect sensors are often combined with the threshold detection and it is frequently known as switch. In terms
09-29-2017 | Science & Education
QYresearchreports
Global Hall Switch Market Research Report 2017
This report studies Hall Switch in Global market, especially in North America, Europe, China, Japan, Korea and Taiwan, focuses on top manufacturers in global market, with capacity, production, price, revenue and market share for each manufacturer, covering Infineon Allegro MicroSystems Diodes Incorporated Melexis Semiconductors Texas Instruments Dexter Micronas NXP IXYS Integrated Circuits Division TE Connectivity AKM Cherry Honeywell Rohm To Download Sample Report With TOC: https://www.qyresearchreports.com/sample/sample.php?rep_id=922959&type=E Table of Contents Global Hall Switch Market Research Report 2017 1 Hall Switch Market Overview 1.1 Product Overview and Scope of Hall Switch 1.2
06-28-2017 | IT, New Media & Software
HTF Market Intelligence Consulting Pvt. Ltd.
Hall Sensor by Type (Analog Output Hall Sensor, Digital Output Hall Sensor),Appl …
HTF Market Intelligence released a new research report of 120 pages on title 'Global Hall Sensor Market Research Report 2017' with detailed analysis, forecast and strategies. The study covers a key region that includes United States, EU, Japan, China, India, Southeast Asia and important players such as AKM, Allegro, Infineon.................. Summary In this report, the global Hall Sensor market is valued at USD XX million in 2016 and is
03-17-2010 | Health & Medicine
dvl
Cumberland Hall of Hopkinsville Welcomes New Therapist
HOPKINSVILLE, Ky. – (March 16, 2010) – Cumberland Hall Hospital, a Psychiatric Solutions Inc. (PSI) facility, welcomes therapist Dr. Jason Bluemlein. Bluemlein comes to Hopkinsville from Fort Mitchell in Northern Kentucky, where he had owned and operated a private practice since 2005. Bluemlein is the program director and therapist for the new Warrior Resilience Program, the military-specific partial hospital program. The outpatient program is designed to meet the needs of soldiers
Comments about openPR
We publish our press releases on openPR.de because we like people who are "open" - just like us.
Frank Obels, CEO, INCONET - Informationssysteme, Communication und Netzwerkberatung GmbH