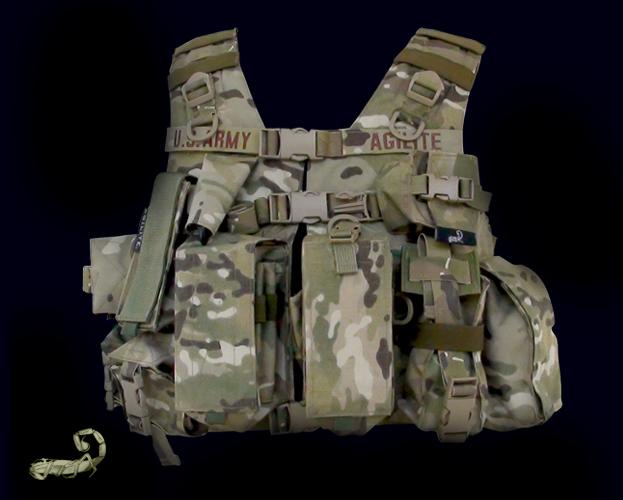 Agilite and Source Teaming Up to Produce the Ultimate Tactical Hydration System Tel Aviv, Israel, April 25th 2011-Agilite, Israel's cutting-edge manufacturer of tactical gear has announced a co-operative project with Source Vagabond Systems Ltd, Israel's premier tactical hydration system manufacturer, to create a new version of their latest hydration system, the "Diamond", which will be produced exclusively for Agilite. Source Vagabond Systems has a worldwide reputation for manufacturing tactical hydration systems and is a supplier of the US Marines and the British Army, among many others. Their latest jewel, the Diamond is a super-low profile hydration system, which, through its contoured design, allows it to sit flatter on the wearer's back than traditional systems making it easier for soldiers to maneuver and get in and out of vehicles and other tight spaces. The combination of Source's Diamond and Agilite's lightweight tactical vests will allow soldiers to be fully equipped and yet comfortable and maneuverable. The Agilite-Source joint project involves a new version of the Diamond that is compatible with their M.A.S.S. load bearing system so that the Diamond can be worn independently of the Agilite Modular Assault Pack that is included with every Agilite Vest. "With Agilite gear being used more and more by US and other forces in Afghanistan, it is important that we have the perfect integrative hydration system that suits our high-speed, no-bulk style," said Dror Lefler, Agilite Tactical's Chief Designer; "Our assault pack already works with hydration systems but we wanted an alternative for when the assault pack is detached. Many soldiers prefer our M.A.S.S. (Modular Attachment Suspension System) over M.O.L.L.E or other systems as, using less material and much less webbing, it is much lighter." "We are pleased to be working with Agilite on this project, they are known for their innovative high-speed tactical designs and the inclusion of a high-speed system like the Diamond into their load-bearing system is a logical progression." Said Meni Keinan, Head of military design at Source. The first Agilite-compatible Diamonds are expected to be on the shelves in mid-June. For more information , contact info@AgiliteGear.com or 319-830-1997.Agilite is an Israeli/American manufacturer of high quality tactical vests and other tactical gear for military, law enforcement and security personnel.Contact: Steve Hoodjer Telephone:(319)830-1997 Steve@AgiliteGear.com 301 Lincoln St. Parkersburg, IA 50665

08-14-2018 | Advertising, Media Consulting, …
Baker Creative
Columbus Firm Goes Diamond
Columbus, OH – After having a successful 2017 and winning multiple awards, Baker Creative, a global branding and PR firm, is having a strong year. Baker Creative has been awarded the Diamond Award by the PRSA East Central District. The Diamond Awards are presented to public relations professionals who have successfully used ingenious skills and creativity to take on a communications task. This is the second Diamond Award Baker
11-20-2017 | Business, Economy, Finances, B …
business news
Global Industrial Diamond Market 2017 - Schlumberger, Sumitomo Electric, Applied …
Apex Market Reports, recently published a detailed market research study focused on the "Industrial Diamond Market" across the global, regional and country level. The report provides 360° analysis of "Industrial Diamond Market" from view of manufacturers, regions, product types and end industries. The research report analyses and provides the historical data along with current performance of the global Industrial Diamond industry, and estimates the future trend of Industrial Diamond market
10-30-2017 | Advertising, Media Consulting, …
IndexBox UK
US Diamond Market, 2025
IndexBox has just published a new report "World: Diamonds And Other Precious Stones (Unworked) - Market Report. Analysis and Forecast to 2025" ( http://www.indexbox.co.uk/store/world-diamonds-and-other-precious-stones-unworked-market-report-analysis-and-forecast-to-2020/ ). This report is best suitable for you if you: • Are planning to enter a new geographical market and wish to know which one is best for your product • Are planning to enter a new product market and want to have a detailed overview of the market
02-13-2017 | Business, Economy, Finances, B …
Global Market Reports
Global Industrial Diamond Sales Market 2017 - Advanced Diamond Solutions, Applie …
The Industrial Diamond Sales market research report distils the most essential aspects of the market and presents them in the form of a comprehensive and cohesive document. The findings of this report have been obtained via a balanced mix of both primary and secondary research. Interviews of C-level executives in the Industrial Diamond Sales market form a chunk of the qualitative analysis contained in this report. Download Sample Report @
04-08-2011 | Industry, Real Estate & Constr …
DC Diamond, Inc.
DC Diamond Inc. Launches Diamond Tools E-Commerce Website
Scottsdale, AZ (April 8, 2011) Responding to growing customer demand for a secure onsite location where precision diamond cutting tools could be sourced and purchased, DC Diamond Inc., headquartered in Scottsdale, Arizona, has launched a new, customer-focused e-commerce website featuring a full line of diamond saw blades, cup wheels, tuck points and core bits. The website, located at www.dcdiamondinc.com, is a resource for end-users such as concrete
02-28-2011 | Business, Economy, Finances, B …
JMKC Jewels Pvt. Ltd.
Daminaz Diamond - Diamond Brand Launching
JMKC Jewels Pvt Ltd launches its luxurious yet affordable brand - DAMINAZ DIAMONDS. DAMINAZ Diamond Jewellery collection has a wide range of exquisitely crafted designs, created to enhance every look and light up every occasion. We maintain a warm and comely environment built on Trust. We ensure that our esteemed customers, partners and associates are dealt with both professionalism and a healthy family-like atmosphere. DAMINAZ is committed to its quality assurance, best
Comments about openPR
Your portal is fast, simple, and easy to use. Others may have more functions but they also demand more editing time, you have to preformat the text in order to achieve a good result etc. I think openPR is really fantastic!
Andreas Knepper, wallmedien AG