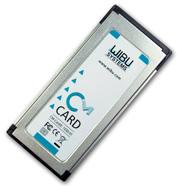 Software vendors can protect their software with this new CmCard/E.

Technology leader providing new hardware with a memory size of 4 GByteHanover (CeBIT) – Wibu-Systems (Hall 7, A35) announced today that the CmCard/E is the new Card module making the CodeMeter® Digital Rights Management (DRM) technology now available under the ExpressCard® form factor. The CodeMeter DRM system is a proven and highly flexible protection technology for digital products and has been well adopted by many software vendors since its introduction in 2003. "CeBIT of this year is for us the opportunity to enlarge our scope of hardware solutions by releasing the new card module CmCard/E providing a 4 GB of flash in addition to our CodeMeter DRM system," said Oliver Winzenried, CEO and founder of Wibu-Systems AG. "With ExpressCard modules and ExpressCard sockets now becoming widely available we follow our customer needs for a higher performing technology. With the new card we can support larger storage capacities for all kind of applications including the capability of protecting large audio and video files. CodeMeter security products integrate with all mayor platforms based on Windows, Apple and Linux. Consumer and Industrial Electronics will be next areas where the adoption of the ExpressCard standard will take place. We are ready to serve those markets and their needs by offering our protection solutions for intellectual property assets to be protected in more complex environments."“The use of ExpressCard technology in Digital Rights Management is an exciting next step in the evolution of this technology,” said Brad Saunders, chairman, PCMCIA, the trade association that developed the ExpressCard Standard. “WIBU’s CodeMeter system is an illustration of how ExpressCard technology can be applied to facilitate the protection of intellectual property assets across the globe. Wibu-Systems joins the many other PCMCIA members who have introduced modules in areas such as connectivity, communications, memory, storage, security and entertainment.” Customer applications are requiring removable and high quality security based on DRM solutions, while mandating protection of software and data assets as well as safeguarding of personal data such as passwords.Strong security as defined by AES and ECC encryption standards is supported by the CodeMeter DRM solution. CodeMeter development tools are productive tools for establishing license management and the administration of licenses for many types of applications ranging from software protection to document and digital media protection. CodeMeter DRM supports protection needs based on one single DRM platform for multiple software vendors and content providers. CodeMeter products provide in addition particular storage to keep the private user data including licenses, credit accounts and other personal data separated from less trusted environments.Wibu-Systems has been shipping over one million security tokens such as WibuKey and CodeMeter for software and license protection, for authentication and SmartShelter™ for document protection. Wibu-Systems has been a longtime PCMCIA member since 1993, headquartered in Germany, with European offices in Belgium, the Netherlands and in UK. International offices are in Seattle and Shanghai from where the US and Chinese customer bases are served.Wibu-Systems AG was founded in 1989 by Oliver Winzenried and Marcellus Buchheit. The main focus is in the fields of Digital Rights Management, software protection, license management, document protection and access control. The company located in Karlsruhe has distributors all over the world and offices in Seattle, USA, as well as in Shanghai, China. About ExpressCard Technology ExpressCard technology (www.expresscard.org) is the latest high-performance, hardware expansion standard for notebook and desktop computers. ExpressCard and PC Card technologies are found in more than 95 percent of all notebook computers. ExpressCard technology supports the addition of flash memory cards, wired and wireless communications hardware, security devices, and emerging applications by simply inserting a module into a notebook, desktop or other ExpressCard compliant systems. The ExpressCard Standard was developed by PCMCIA, a leading trade association founded in 1989 to establish technical standards for modular expansion of computer systems. © All trademarks, trade names, service marks, and logos referenced herein belong to their respective organisations and companies.WIBU-SYSTEMS AG Elke Spiegelhalter Tel: +49-721-93172-11, Fax: +49-721-93172-22 www.wibu.com, www.codemeter.com, elke.spiegelhalter@wibu.com

09-29-2009 | IT, New Media & Software
WIBU-SYSTEMS AG
Software protection goes PKI
Wibu-Systems and charismathics to co-operate on merging security technologies As of September 1st 2009, the two German security experts Wibu-Systems AG and charismathics GmbH have entered into an agreement for strategic product cooperation. With this partnership, Wibu’s CodeMeter product range will now support all major identity management standards and allows the use of all common PKI applications such as Outlook, Firefox, Acrobat, and most of the Virtual Private Networks thanks to
02-23-2009 | IT, New Media & Software
WIBU-SYSTEMS AG
CeBIT 2009: Wibu-Systems presents first prototype as SD Card for research projec …
More security in mobile home nursing care logistics Public health care and especially mobile home nursing care have to meet particular requirements: first, only those authorized should be allowed to access personal medical data. Also, the information exchanged between all parties (doctors, hospitals, care centers, and healthcare workers) has to be secure and efficient. Wibu-Systems AG, jointly with its partners in the research project VitaBIT, is developing a new, open and
02-09-2009 | IT, New Media & Software
WIBU-SYSTEMS AG
CeBIT 2009: Wibu-Systems presents successful ExpressCard® compliant card module
Wibu-Systems reports a significant increase in the demand for its ExpressCard® CmCard/E in the first six weeks of 2009. Software vendors use the CmCard/E card module that integrates CodeMeter® Digital Rights Management (DRM) technology under the ExpressCard form factor into PCs. The CodeMeter DRM system is a proven and highly flexible protection technology for digital products and has been well adopted by many software vendors since its introduction in 2003.
02-03-2009 | IT, New Media & Software
WIBU-SYSTEMS AG
New, unique licensing solution from Wibu-Systems at CeBIT 2009
Security and licensing for software vendors at CeBIT When developing software products, a company will often consider the need for a secure protection system and comprehensive licensing strategy. For meeting these and other developer needs, the German company, Wibu-Systems AG, will demonstrate its new license management solutions during CeBIT next month. The newly improved CodeMeter System provides very flexible protection utilizing both a hardware dongle called a CodeMeter Stick and with