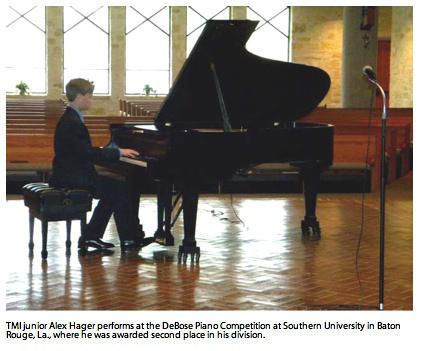 Alex Hager, a junior at TMI – The Episcopal School of Texas, has earned several top-place awards for piano performance during the 2011 spring competition season.Hager took second place in the Advanced Gifted Division for his age group in the DeBose Piano Competition on April 15 at Southern University in Baton Rouge, La. He also won first place in the Petroff State Piano Competition on March 5 in San Antonio, for which he was invited to play in the annual Petroff Spring Recital on March 27.Previously Hager won second place in the Junior Tuesday Musical Club Piano Competition on Feb. 26 and was asked to perform in a March 8 recital for adult members of the San Antonio Tuesday Musical Club. At the Texas Young Artist Piano Competition on Feb. 12 at Texas State University in San Marcos, he received an honorable mention.Hager also has been offered a full scholarship to the Baylor Summer Piano Institute for young musicians at Baylor University in Waco and will attend for a week of intensive study in June.About TMI – The Episcopal School of Texas: Founded in 1893, TMI is a private, co-educational, college-preparatory school for grades 6-12, with optional Junior ROTC and boarding programs. For information, visit www.tmi-sa.org or call 698-7171.TMI – The Episcopal School of Texas 20955 West Tejas Trail San Antonio, TX 78257

05-31-2019 | Arts & Culture
European Piano Academy
European Piano Academy Brings Piano Learning for Adults to Australia
The European Piano Academy has always aimed to make piano lessons accessible to all and inculcate a deep love for music and piano among its students. Originally founded by Illya Zozulya in Sydney, the academy has expanded to the suburbs too. The team of professional teachers at the European Piano Academy aim to make a difference in the world of piano teaching by employing the best traditions of Russian and European
11-01-2018 | Leisure, Entertainment, Miscel …
Sokol Piano Academy
Piano school launches piano lessons over live WhatsApp video
London, UK 31 October 2018: For the first time, aspiring piano students anywhere in the world can take private online lessons in real-time video with concert pianists from the Sokol Piano Academy. Many adults dream of playing the piano but most are unmotivated to start. There can be many reasons for this: fear of embarrassment, lack of self-confidence, or the belief that one is too old to start. You can
06-13-2018 | Science & Education
European Piano Academy
European Piano Academy: The Ideal Destination to Learn Piano
The European Piano Academy was established in Sydney by professional pianist and teacher, Illya Zozulya. He had the aim of teaching Australian students how to play the piano by combining the best traditions of European and Russian techniques of the Australian students. At EPA, the tutors focus on strengthening the emotional and mental aspects of a student’s performance. They also focus on making the piano aspirants of the academy technically sound
04-05-2012 | Arts & Culture
Charlotte Academy of Music
Piano Students Named State Winners
Charlotte Academy of Music is pleased to announce that piano students Mikaela Anderson, Melissa Olarte, Meghan Speed and Hannah Williams all earned Superior ratings at the NC Music Teachers Association Piano Contest. These District Winners were invited to perform at the State Piano Contest at Queens University on March 31, 2012. There Mikaela Anderson and Meghan Speed were awarded top honors and invited to perform in the NC
03-27-2012 | Arts & Culture
Stillpoint Piano
Learn to Play the Piano with the Stillpoint Piano Method
PORTLAND, OR – According to a recent Gallup Poll on music making, 85% of Americans believe that music is a very important part of their lives while 82% wish they had learned to play a musical instrument. The adage “it’s never too late to try something new” rings true when it comes to learning one of the world’s most popular instruments—the piano. Although there are numerous ways to learn
04-15-2011 | Arts & Culture
Piano-Yoga®
Call for Piano-Yoga® Teachers
With the continued growth of this groundbreaking piano method, Piano-Yoga® is now actively seeking to expand its pool of teachers. Piano-Yoga® is developing a new teacher-training course for established pedagogues interested in becoming ambassadors of the method, whether as independent practitioners, or as part of the Piano-Yoga® organisation itself. Expressions of interest from piano teachers possessing appropriate qualifications (first degree in piano performance and/or a Licentiate diploma as minimum)
Comments about openPR
9 o'clock: discuss press release with client, 10 o'clock: submit release to openPR, within the briefest possible time release is published and displayed in a prominent place on openPR.de. I am thrilled!
Zehra Spindler, Calypso Now! - Communication Agency