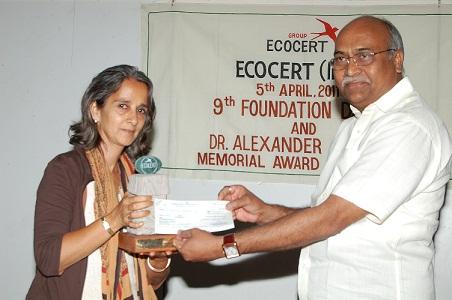 Mr Prakash Pohare, chief editor of daily Deshonnati was conferred Dr Alexander Daniel memorial award by Ecocert India for the year 2011 on 5th April at Aurangabad, Maharashtra for his exemplary work in the field of promotion of organic farming in the suicide prone Vidarbha region of Maharashtra. Aurangabad, When everyone in India was busy celebrating ICC cricket world cup victory and shedding tears of happiness for their 11 heroes, a small ceremony was organised in the busy city of Aurangabad on 5th April to felicitate an unsung hero – Mr Prakash Pohare for his decade long notable work in the field of organic farming and organic food promotion. He was conferred Ecocert India sponsored prestigious Dr Alexander Daniel memorial award. The small but pleasant program witnessed the presence of Ecocert India’s staff, organic entrepreneurs and farmers associated with Ecocert India’s mission to create a country of healthy and toxin free lands and lifestyles. “It’s been two years we have started this award and we are honoured to present this award to Mr Prakash Pohare for his selfless service towards the environment and mankind”, said Dr Selvam Daniel, Managing Director of Ecocert India at this occasion. Ms Kavita Mukhi, the lady now popularly known for her farmers’ market initiative in Mumbai and the recipient of last year’s award presented the award to Mr Prakash Pohare. Ms Mukhi in her speech admired the work of Mr Pohare and emphasized the need to get rid of the hyped refined products viz. refined sugar, refined oil and refined salt – the ‘evil trinity’ as well as genetically modified food. She emphasized the importance of local fresh organic food and India’s traditional wisdom of healthcare and agriculture. Mr Prakash Pohare, chief editor and managing director of a popular Marathi language daily newspaper ‘Deshonnati’, was instrumental for past 10 years for the promotion of organic farming in Vidarbha region of Maharashtra. A social activist by nature, Mr Pohare has worked tirelessly for past 10 years to sympathize the dreaded small and marginal farmers of Vidarbha, helped them to get out of the vicious circle of chemical and high input agriculture and embrace the low/no budget organic farming in order to avail the sustainable gains from their small piece of holdings. He specially started a weekly newspaper ‘Krishakonnati’ to promote the philosophy of low budget organic farming, which soon rose to fame. At the same time he sensitized the consumers to fear the food from chemical agriculture, and detox their bodies by consuming only organic food. He used the platform of his non political newspaper effectively to promote organic agriculture and its benefits. “I was perturbed by the increasing suicide rate of farmers in Vidarbha in the year 2001 and forced to study each and every case of suicide. The outcome of the in depth study unmasked the real culprit. It was none other than the so called modern agriculture,” said, Mr Prakash Pohare while sharing his views on this occasion. “The farming of older days was much in harmony with the nature. The mixed cropping pattern, holistic and local cow dependent agriculture was self sustaining and meeting the basic needs of the farmers. The introduction and propaganda of high input agriculture detached the farmers from the basic philosophy of ‘life’ and permanently engaged them in the production of poisoned produce from dead soils. All their traditional wisdom became useless in no time with the advent of modern agriculture. Result was manifested by the increasing debts, decreasing productivity of farms and increasing rate of farmers ending their lives in depression,” said Mr Pohare. “Promotion of organic farming seemed to be the only solution and that is what i have been doing for past 10 years through my newspaper, my speeches and my own organic farming demonstration plot. I am grateful to Ecocert India for having appreciated my work and this gives me the much needed encouragement and motivation to work more for the sustainable development of farmers in my region,” expressed Mr Pohare “Late Dr Alexander Daniel worked whole his life for the upliftment of small and marginal farmers of the country and adoption of organic agriculture was that sound tool he believed will help those millions of disadvantaged farmers in the country to realise this dream. The award being given in his name aims at creating the fraternity of warriors like Mr Prakash Pohare who dared to fight against everything which is conventional to disseminate the message of sustainability, strengthening of local economies, safe consumption and sovereignty”, said Dr Amol Nirban, Business Development Officer of Ecocert India and member of selection committee.Ecocert is committed to establish trust and faith between clients and consumers of organic products. Ecocert ensures that operators follow ecologically sound production and processing methods in accordance with the set standards. Constant supervision of efficiency and impartiality benchmarks the authenticity of Ecocert certification.ECOCERT India Pvt Ltd, Sector 3, Hindustan Awas, Walmi- Waluj Road, Nakshtrawadi, Aurangabad

12-14-2010 | Fashion, Lifestyle, Trends
ECOCERT INDIA
Rendezvous with OTA:Ecocert India’s initiative to facilitate dialogue between …
Dec 13, 2010,Aurangabad, Ecocert India, a leading name in the field of organic and fair trade certification in the south Asian region had recently organised a business dinner to facilitate interactions between its clients and the office bearers of Organic Trade Association of the US. “This is indeed necessary, we feel that we should make frequent deliberate attempts to go on organising meetings of Ecocert’s certified operators in south Asian
Comments about openPR
OpenPR is clearly structured and remains true to its principle of confining itself to the essential parts. OpenPR has proven to be a very good and reliable partner to our media agency: Within the shortest time the releases are online and go down well with the media representatives. The success of OpenPR is reflected in the steadily increasing number of press releases. It is good that OpenPR exists!
Ursula Koslik, Director Marketing & PR, F+W Hamburg