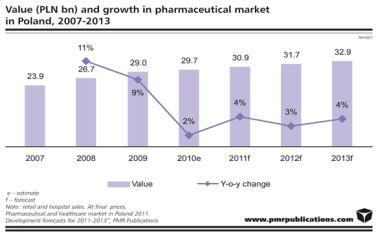 Value and growth in pharmaceutical market in Poland

According to the latest PMR Publications’ report “Pharmaceutical and healthcare market in Poland 2011”, the pharmaceutical market in Poland will be worth PLN 30.9bn (€8bn) in 2011 in final prices, 4% more than a year earlier. The increase in OTC sales will exceed that of the disappointing year 2010, but this will not counterbalance the weak sales of reimbursed drugs. The sales of the latter might be at their most fruitful directly before the introduction of fixed margins and prices, which will take place, in accordance with the latest draft Reimbursement Act, on 1 January 2012.Moderate increases expected on pharmacy market between 2010 and 2013 In 2010 the Polish pharmaceutical market grew by just 2%, to PLN 29.7bn (€7.4bn), the lowest figure in years, according to PMR estimates. The slowdown is attributed in part to a high comparative base (an 9% year-on-year increase in 2009), as sales in 2009 were boosted by the early peak of the flu season and concerns about swine flu, which impeded the increase in early 2010. Between 2011 and 2013 we expect relatively modest sales on the overall pharmaceutical market. The main reasons are the anticipated cuts in reimbursement and the reduction in the purchasing power of patients with regard to reimbursed drugs (as a result of changes to the reimbursement system in Poland which are to come into force in 2012). Stagnation of the hospital market According to our forecasts, the hospital market, which depends largely on public subsidies, will stagnate in the next three years, assuming an increase in value, of 0%-1% to PLN 2.9bn (€0.7) in 2013. It is expected that this will reflect cuts in spending: for example in 2010 the NFZ (National Health Fund) spent approximately PLN 1.6bn (€400m) on drug therapy programmes i.e. 33% y-o-y more, but in 2011 it intends to spend as much as PLN 1.5bn (€366m), which is 6% y-o-y less (the only reduction in spending between 2005 and 2011).Sensory organ preparations and anitneoplastic and immunomodulating agents to be market drivers between 2011 and 2013Between 2011 and 2013, the Polish pharmaceutical market will be driven by sales of sensory organ preparations (with a CAGR of 10%), antineoplastic and immunomodulating agents (with a CAGR of 9%), and drugs in the “Blood and blood forming organs” category (a CAGR of 7%). The incidence of ailments such as glaucoma, cancer and anaemia, along with deep vein thrombosis, which directly affects the sales of drugs in these categories, is increasing among the Polish public. Sales of preparations in the “Parasitology” ATC category will also grow more rapidly than the overall market, but this category accounts for an insignificant portion of the market.PMR http://www.pmrcorporate.com is a British-American company providing market information, advice and services to international businesses interested in Central and Eastern European countries as well as other emerging markets. PMR's key areas of operation include business publications (through PMR Publications), consultancy (through PMR Consulting) and market research (through PMR Research). Being present on the market since 1995, employing highly skilled staff, offering high international standards in projects and publications, providing one of most frequently visited and top-ranked websites, PMR is one of the largest companies of its type in the region.PMR Publications ul. Dekerta 24, 30-703 Krakow, Poland tel. /48/ 12 618 90 00, fax /48/ 12 618 90 08 Contact Person: Anna Rojek, marketing@pmrcorporate.com www.pmrpublications.com

You can edit or delete your press release Polish pharmaceutical market: modest growth expected between 2011 and 2013 here

06-13-2017 | Business, Economy, Finances, B …
ReportsWorldwide
Agrochemicals Market in Poland
ReportsWorldwide has announced the addition of a new report title Poland: Agrochemicals: Market Intelligence (2016-2021) to its growing collection of premium market research reports. The report “Poland: Agrochemicals: Market Intelligence (2016-2021)” provides market intelligence on the different market segments, based on type, active ingredient, formulation, crop, and pest. Market size and forecast (2016-2021) has been provided in terms of both, value (000 USD) and volume (000 KG) in the report. A
09-21-2011 | Business, Economy, Finances, B …
Poland Consulting Services
A+ ratings on Poland
Jelenia Gora/Poland, 20.09.2011 - In August 2011 two rating agencies i.e. Standard & Poor's and Moody's Investors Service affirmed their A+ rating on Poland with a stable outlook. Both agencies noted that the Polish economy is competitive and increasingly diversified. Moody's evaluated Poland as relatively well placed to withstand global turmoil with its relatively resilient economy. Both agencies stressed that the Polish economy continued to expand in 2009, in contrast
08-17-2010 | IT, New Media & Software
PMR Publications
IT market in Poland
IT providers in Poland are starting the post-crisis period in actually quite good moods and are already beginning to predict what solutions will be most sought after by their customers during prosperity. However last year hardware distributors recorded significant reduction in the number of orders placed, especially by business customers, software and IT services providers performed far better. A majority of them had similar sales as in previous periods, while some
07-07-2009 | Media & Telecommunications
PMR Publications
VoIP in Poland
At the end of 2008 the Polish VoIP telephony market was worth PLN 440m, with CaTV operators having generated the largest share of revenue in the segment. In recent years also fixed-line operators have included VoIP services into their offer. According to research and consulting company PMR Polish VoIP market continues to represent a small share of the fixed-line telecommunications market. In 2008 it accounted for approximately five percent of the
04-30-2009 | Industry, Real Estate & Constr …
PMR Publications
Construction sector in Poland
Construction companies have not been more critical in their assessment of the construction market situation in the past five years or so. Faced with a reduced number of orders, builders announce that they will seek to win new contracts mainly by offering lower prices, which may lead to a deflation in construction. The most attractive construction segments in the years to come will include road construction, sports facilities construction and
12-10-2008 | IT, New Media & Software
Central and Eastern European Outsourcing Association
CEEOA expands into Poland
Krakow, Poland – 9th December, 2008 - Today, the Central and Eastern European Outsourcing Association (CEEOA) welcomes a new member to its ranks with the addition of ASPIRE - The Association of IT and Business Process Services Companies in Poland. Established in October 2008, CEEOA aims to promote Central and Eastern European as a competitive alternative to other global offshoring destinations and to increase services delivery quality and volume under the
Comments about openPR
We publish our press releases on openPR.de because we like people who are "open" - just like us.
Frank Obels, CEO, INCONET - Informationssysteme, Communication und Netzwerkberatung GmbH