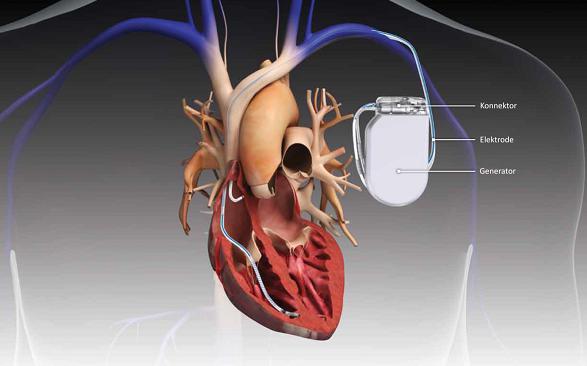 Cardiac implants are designed to monitor irregular heartbeats for people suffering from heart rhythm disorders. These abnormalities are caused by problems with the heart’s electrical system, which signals the heart to contract and pump blood throughout the body. Cardiac implants comprise pacemakers, implantable cardioverter defibrillators (ICDs), cardiac resynchronization therapy, implantable hemodynamic monitoring, and implanted heart rhythm monitors, among others, are also known as loop recorders. These implants are used in the treatment of myocardial ischemia, arrhythmias, and acute myocardial infraction. Due to growing aging population and demographic changes across the world, prevalence of heart disease is expected to increase, which in turn, is expected to increase the demand for cardiac implants in the near future. According to the American College of Cardiology, as of 2017, cardiovascular diseases accounts for around 800,000 deaths in the U.S and it remains the leading cause of death in the U.S.Get a PDF Sample of Research Report @ https://www.coherentmarketinsights.com/insight/request-pdf/1176Rising prevalence of cardiovascular diseases is expected to boost growth of the cardiac implants marketRising incidence of cardiovascular diseases is expected to boost growth of the cardiac implants market over the forecast period. According to the World Health Organization, in 2015, around 17.7 million deaths were recorded due to cardiovascular diseases, out of which around 7.4 million deaths were caused due to coronary heart disease and 6.7 million deaths due to stroke. The other factors that are contributing to growth of the market include sedentary lifestyle leading to adoption of unhealthy eating habits, rampant advancements in technologies such as Cardialen, Parachute Implant, Watchman, HVAD Pump (HeartWare Ventricular Assist System), and HeartMate 3 are leading to new therapies for heart failure as well as growing geriatric population. However, high cost of the devices making it unaffordable for the middle and low income population is hindering growth of the global cardiac implants market are.Increasing demand for pacemakers is expected to propel growth of the cardiac implants market in North AmericaOn the basis of regions, the global cardiac implants market is segmented into North America, Latin America, Europe, Asia Pacific, Middle East, and Africa. North America is expected to hold a dominant position in the market, owing to the rising demand for pacemakers. According to the Centers for Disease Control and Prevention, 2017, every year around 790,000 people have a heart attack, out of which 580,000 are reported as new cases, and 210,000 are recurring cases. Every 40 seconds one heart attack case is reported in the U.S. Furthermore, Asia Pacific is expected to be the key region in the global cardiac implants market. This is mainly due to rampant advancements in technology such as MRI compatible pacemakers, increasing demand for minimally invasive surgeries, and rising prevalence of cardiovascular diseases.Increasing development of innovative products is expected to propel growth of the cardiac implants marketMajor players operating in the global cardiac implants market include Medtronic, Inc. Boston Scientific Corporation, Abbott Vascular Inc., Edwards LifeScience Corporation, Thoractec Corporation, Syncardia systems, and St Jude Medical, Inc. Key players are focusing on strategic mergers and acquisitions and development of innovative products. For instance, in 2014, Medtronic announced the world’s first smallest minimally invasive cardiac pacemaker—Micra TPS (Transcatheter pacing system), in the U.S. The device is delivered into the heart directly through a catheter inserted in the femoral vein. Micra TPS does not require the use of wires to connect to the heart, this in turn reduces recovery time and complications as compared to conventional pacemaker implants.Make an Inquiry for Discount On this Report @ https://www.coherentmarketinsights.com/insight/talk-to-analyst/1176About Coherent Market Insights:Coherent Market Insights is a prominent market research and consulting firm offering action-ready syndicated research reports, custom market analysis, consulting services, and competitive analysis through various recommendations related to emerging market trends, technologies, and potential absolute dollar opportunity.Contact Us:Mr. Shah Coherent Market Insights 1001 4th Ave, #3200 Seattle, WA 98154 Tel: +1-206-701-6702 Email: sales@coherentmarketinsights.com