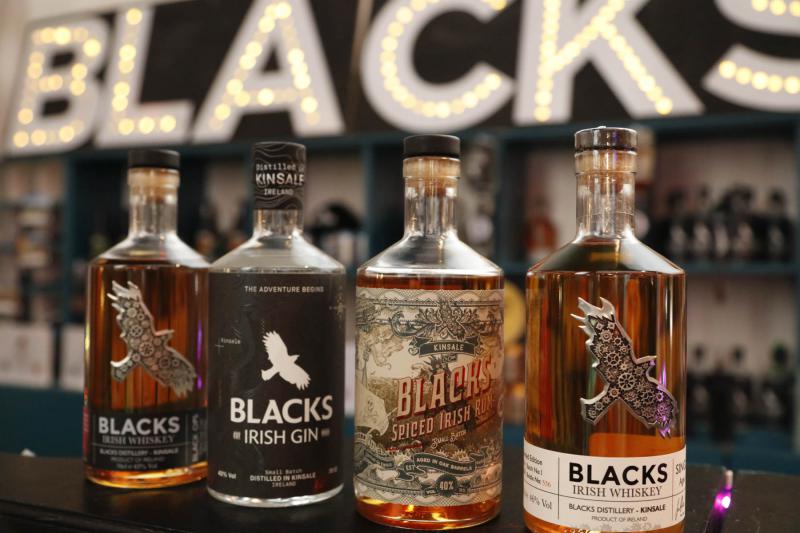 Blacks Announce Distillery Founders Club Investment Opportunity With Whiskey Distillation Set To CommenceAfter successful entry into the world of craft beer and becoming the first distillery in Ireland to produce rum, Blacks Brewery & Distillery are expanding, with the installation of new whiskey stills onsite in Kinsale. 2019 will see the expansion of the brewery and distillery, and installation of new whiskey stills, for onsite whiskey distillation. This exciting development will be in part funded by The Founders Club whiskey cask pre-sale. The Founders Club is an opportunity for investors to own their very own cask of Premium Blacks Irish Whiskey from the first years of production at the distillery. The first 500 casks of the production will be available for those seeking not only the opportunity to invest in something a little bit different, but the chance to own a limited cask of whiskey produced in Kinsale. Further, investors gain membership in an exclusive network of like minded individuals from a diverse range of businesses and industries. After five years of maturation investors can have their whiskey bottled as their own label whiskey, or have the option to sell the entire cask back to the distillery for a 4% p/a interest return. A range of cask types are available, each providing a unique flavor profile to Blacks premium whiskey offering. For more information about the Blacks Distillery Founders Club, please email sophie@blacksbrewery.comBlacks Micro Brewery & Distillery is an Irish micro brewery & distillery, founded by husband and wife team Sam and Maudeline Black in 2013, and remains a 100% family owned business who pride themselves on both quality and innovation. Many years ago, Maudeline gave Sam a home brewing kit for Valentine’s Day, sparking their passion for brewing. This hobby developed into an obsession and, in 2013, their dreams became a reality when Blacks Brewery was founded. In 2015 a distillery was added to the site, where they began producing a range of Irish craft spirits. Currently, Blacks produce a range of beers, Gin, and Ireland’s first and only rum.Blacks Brewery & Distillery, Farm Lane, Kinsale, Cork, Ireland

01-21-2021 | Leisure, Entertainment, Miscel …
Black Wealth LLC
Black Wealth Entertainment
LOS ANGELES, CA, January 21 — Today Black Wealth LLC announced that it has released new Black & Wealthy fashion line, which has sold over 1,000 pieces of apparel in the U.S as of midnight Wednesday, January 20th. These sales include women’s and mens clothing, apparel, and accessories. Black Wealth LLC also announced that they will be conducting a nationwide artist search for fresh new talent to add to their
12-07-2018 | Health & Medicine
Black Brewing Co.
Black Brewing Co.
At Black Brewing Co., we make some of the most uncompromising craft beers in the Margaret River region. Generous, bold and wold at heart, our beers tell a refreshing tale of time and place, inspired by Western Australia's incredible people and produce. At Black brewing Co., we're thirsty for new experiences and flavours, which is why we develop and discover new and adventurous brews all the time. Contact us, or
11-02-2018 | Advertising, Media Consulting, …
Nationwide Furniture Outlet,Inc
Black Friday at NFOUTLET
Nationwide Furniture Outlet (https://www.nfoutlet.com/) launches Big Black Friday Sale that will allow you to save on the purchase of furniture for your home or office. With us, you can buy furniture at a discount online and free white glove delivery to any city of contiguous 48 United States. At Black Friday, NFOUTLET offers special deals for dozens of brands with discounts on furniture up to 50% OFF and higher. Often, many
09-19-2016 | Health & Medicine
Black Hair Does Grow
Black Hair Myths
There’s no denying we’ve all heard the myths on black hair! Including the one that says that black hair does not grow or that it grows extremely slow, although the slow growth can be the case for some people it isn’t for all! We must consider that the environment, diet and chemicals can also affect the growth of our hair, which is why it may be slower than average for
06-29-2016 | Logistics & Transport
Black Moth
Black Moth Releases topVIEW
topVIEW is the latest feature release for Black Moth’s atlas system and provides users an aerial view of the surroundings of their machinery. The additional perspective enables an enhanced view to further reduce the risk of incidents and injuries on work sites. topVIEW uses the video streams of four cameras around the vehicle, stitches them together and displays a view encompassing the entire perimeter of the vehicle. Footage for the distinctive
11-28-2014 | Industry, Real Estate & Constr …
Genesis Technologies
GECigarette’s Black Friday Sale
Birmingham, United Kingdom (28th November 2014) – Genesis Electronic Cigarettes is having one of their biggest Black Friday sales this year in 2014. Genesis electronic cigarette is having a massive Black Friday sale this year by further reducing the price of their 20ml E-liquids to £3.99. This week long offer should make their customers even happier as Genesis has only a month ago, already cut the prices of the E-liquids from
Comments about openPR
We publish our press releases on openPR.de because we like people who are "open" - just like us.
Frank Obels, CEO, INCONET - Informationssysteme, Communication und Netzwerkberatung GmbH