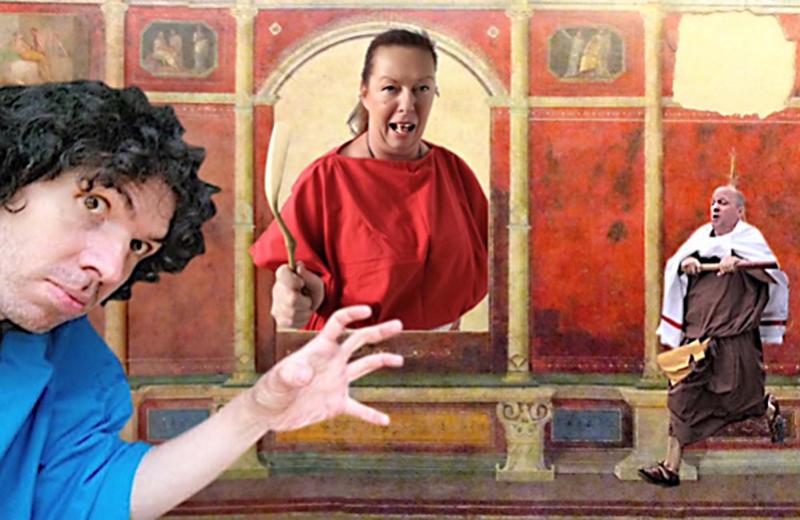 The turbulent adventures of the Roman restaurant owner Barrelius and his Germanic family in the ancient Roman Empire are the focus of the planned new television series MY MANIAC MANSIO.Supporters of the recently launched project crowdfunding for the presentation of a MY MANIAC MANSIO trailer on major TV stations and international streaming services can not only secure "ancient" rewards, but also participate in the production as technical staff or even as an actor, see https://wemakeit.com/projects/your-own-tv-sitcomThe program will also be broadcast in Latin to interest young people in the culture-linking language of Latin - apart from the "classic" authors, who, of course, continue to have their rights.The vast amount of new phenomena, cultures and realities that today's youth is exposed to requires urgent access to our past and our cultural roots. The key to this is Latin - best taught through appropriate media formats.However, for practical reasons, educational experts have been demanding vehemently more publicity for the subject Latin for years in public and private schools. Certain fields of study such as law, medicine, philosophy, pharmacy and others are now much easier to create with sound Latin knowledge.The pioneers of the increasing use of modern media with antiquity were next to the English hit Monty Python with their all-time classic "The Life of Brian" also new TV series like "Plebs", which shows the experiences of three young people in Roman occupied Britain.Critics, however, complain a lot of historical inaccuracies and generally disrespectful dealings with the supposedly venerable antiquity. Refreshingly unconventional scientists, such as Dr. med. Anna Clark, who teaches Roman history at Christ Church College, Oxford, counters that the old-fashioned TV comedies like "sandals" simply give the viewers the good feeling that not much has changed in human history - love, Avarice, lust, hate and pride are just phenomena that have accompanied us since the times when we lived in dark caves.The ARGE Archeology offers interested laymen since 2008 the possibility of active participation in archaeological research excavations of European universities and other educational institutions. ARGE Archeology also develops special media formats for children and adolescents in the field of history and contemporary history.ARGE Archäologie Contact: Kurt Frank, CEO Loefflergasse 56 1130 Wien - Österreich Mob 0043 (0) 699 1310 4166 Office 0043 (0) 1 876 1766 kurt.frank@arge-archaeologie.at info@arge-archaeologie.at www.arge-archaeologie.at

11-08-2017 | Business, Economy, Finances, B …
ReportsWeb
Latin America Colour Cosmetics Market
The colour cosmetics market in Latin America managed to keep its head above water over 2011-2016. The category recorded a CAGR of 1.7% despite a decline in value occurring towards the end of the period, Chile and Argentina offsetting the impact of economic crisis in Brazil and Venezuela. Direct selling still holds strong as the core channel for colour cosmetics purchases in the region but retail infrastructure is rapidly improving
09-22-2017 | Business, Economy, Finances, B …
Market Data Forecast
Latin America Bioactive Ingredients Market by Type
The Latin America Bioactive Ingredients Market was worth $2.99 billion in 2016 and estimated to be growing at a CAGR of 7.35%, to reach $4.26 billion by 2021. Bioactive ingredients are biological compounds added to food products, to assist in the metabolic process for enhanced health. They also play a substantial role in filling the gap for the absence of balanced diet and inadequate intake of nutritional food. These compounds have
12-21-2011 | Business, Economy, Finances, B …
Forestry Research Associates
FRA reacts to article Latin American forestry
A recent report from the Wall Street Journal’s MarketWatch blog is being championed by Forestry Research Associates (FRA) as a beneficial piece for the forestry investment industry. Bainbridge Island, WA, December20, 2011 - A recent report from the Wall Street Journal’s MarketWatch blog is being championed by Forestry Research Associates (FRA) as a beneficial piece for the forestry investment industry. FRA is a research and analysis consultancy specializing in sustainable forestry and
09-20-2011 | Energy & Environment
CWC Group
Latin America Oil & Gas Potential
Produced by The CWC Group, Latin American Oil and Gas Conference takes place on 25 – 27 October 2011, Mandarin Oriental Hotel, Miami, U.S.A. Organisers confirmed that the strategic conference will feature advanced insights from important organisations in the region alongside NOC’s showcases from Brazil, Mexico, Colombia, Trinidad & Tobago, Venezuela, Uruguay and Bolivia. Content centres on the development of the Latin America’s resources, the impact of shale
04-14-2011 | Tourism, Cars, Traffic
Latin Trails
Latin Trails’ Family Friendly Fleet
With pioneer boats in first class and luxury categories, Latin Trails is one of the most family friendly companies to cruise the Galapagos Islands. The company’s three top quality cruises have a capacity for 16 passengers and are ideal for adventurous families traveling alone or in groups of two or three. Besides each boat’s various amenities and world class services, Latin Trails announces that children under 12 will
05-09-2007 | Fashion, Lifestyle, Trends
Perrealo
Do They Know Latin Hip Hop? The Latin Billboard Mistake
This year's Latin Billboard Awards were at their best, we can not deny that Latin Music has made a huge impact within the last two years and many are reaping its benefits. But as so many things must come to an end and a new beginning give way to bigger and better things; we see that many are still not properly schooled in what is happening around us.
Comments about openPR
Your portal is fast, simple, and easy to use. Others may have more functions but they also demand more editing time, you have to preformat the text in order to achieve a good result etc. I think openPR is really fantastic!
Andreas Knepper, wallmedien AG