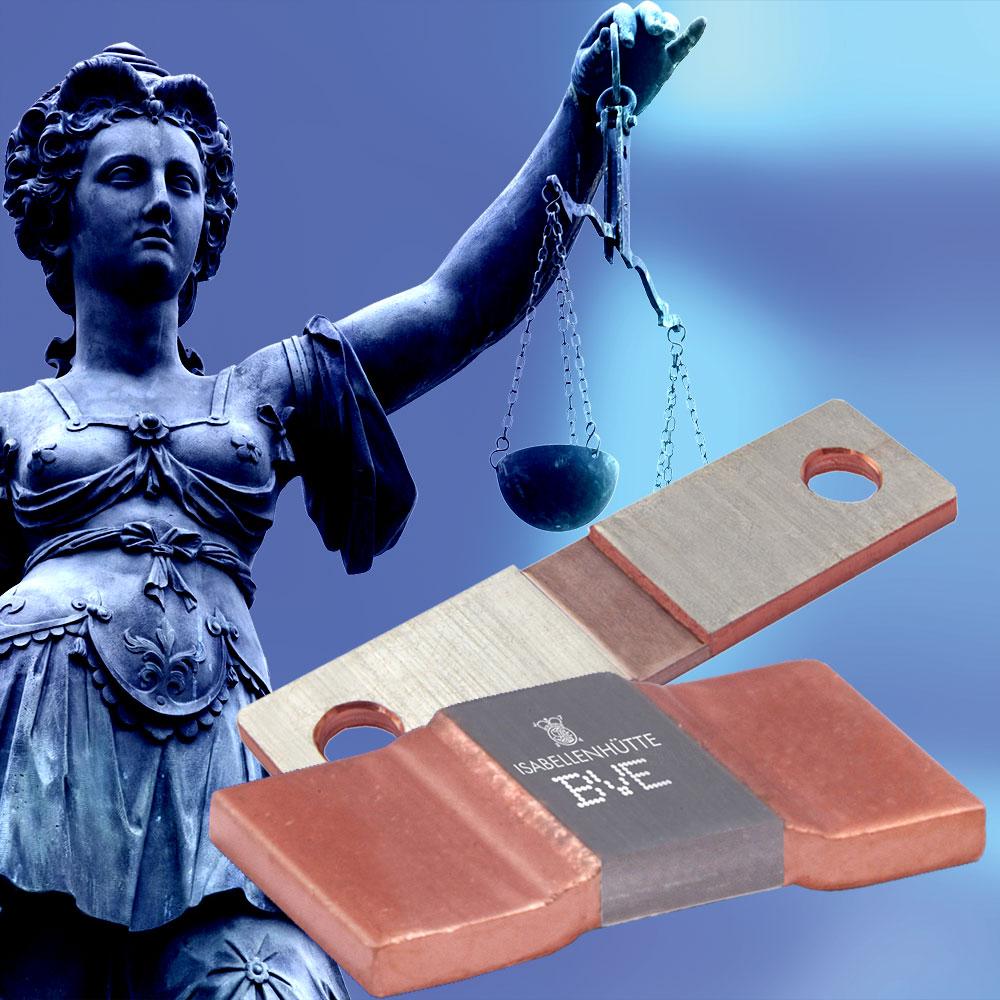 In December 2010, Germany's Federal Supreme Court found in favour of Dillenburg based Isabellenhütte Heusler GmbH & Co. KG in its legal dispute with TT electronics GmbH from Freising, near Munich and part of the TT company. Legal proceedings started in 2005 and were heard by several different courts before reaching the country's Supreme Court. In 2009, Karlsruhe's higher regional court found in favour of Isabellenhütte in its long-running patent infringement dispute with TT electronics GmbH, ruling that the current sensing resistors models CSS and OARS-1 marketed by TT electronics infringed Isabellenhütte's patent in Germany. The court ruled that Isabellenhütte was therefore entitled to damages and access to data, and it was also entitled to force TT electronics to suspend its activities in question.Parallel to this patent infringement case, TT electronics GmbH attempted to use a patent nullity action to undermine the validity of Isabellenhütte's patent in Germany and thereby remove the legal basis for Isabellenhütte's patent infringement case. However, the country's Supreme Court has judged that Isabellenhütte's patent in Germany for current sensing resistors on the milliohm scale is valid (File No. X ZR 121/08).Import ban The Supreme Court’s ruling is effective immediately. Given that shunts of the type in question may now not be produced in or imported to Germany without the consent of Isabellenhütte, it is expected that the judgements of both the Supreme Court and the higher regional court in Karlsruhe will have a far-reaching impact. The shunts in question are current sensing resistors for milliohm values, made using electron beam welding. At Isabellenhütte, these resistors are known as ISA-WELD® products, comprising typical product groups such as BVS, BVR, BVB, BVT, BRS. The resistors are sold to numerous industries: the main sales targets are automotive electronics, for instance as a component used in battery management and the energy sector. Their structure and the special methods used in their manufacturing mean that these components are ideal for high current measurement even when space is extremely restricted. This is the reason for the long-running success of Isabellenhütte's product portfolio.About Isabellenhütte Heusler Isabellenhütte Heusler GmbH & Co. KG has its roots in more than 500 years of smelting and metal processing. The company was first documented in 1482. In 1827, it was transferred to the Heusler family. Today, it is one of the globally leading producers of low impedance high precision and performance resistors. In 1987, Isabellenhütte Heusler was the first business in the world to produce SMD mOhm current sensing resistors. Other business areas include producing thermoelectric and resistance alloys and measuring technology products. Employees at the office and production site in Dillenburg (Hesse) number approximately 500.Company contact: Peter Müller Managing Director Isabellenhütte Heusler GmbH & Co. KG Eibacher Weg 3 – 5 D-35683 Dillenburg Phone: +49 2771 / 934-0 Fax: +49 2771 / 2 30 30 www.isabellenhuette.dePress contact: Michaela Wassenberg Wassenberg PR f. Industrie & Technologie GmbH Rollnerstr. 43 D-90408 Nürnberg Phone: +49 911 / 598 398-0 Fax: +49 911 / 598 398-18 press@tech-communications.net

06-09-2020 | Health & Medicine
Isabellenhütte Heusler GmbH & Co. KG
Isabellenhütte meets high covid-19-related demand in record time
Isabellenhütte, a specialist for precision alloys, supplies the alloy ISOTAN® as a heat conductor for ventilators. When demand for ventilators shot up as a result of the recent developments related to the coronavirus, Isabellenhütte put their rapid and reliable supply performance to the test. This is project organized by the federal government in which Isabellenhütte acts as a supplier to a reputable cable manufacturer. This cooperation had already been established for
12-16-2019 | Industry, Real Estate & Constr …
Isabellenhütte Heusler GmbH & Co. KG
Isabellenhütte receives type examination certification from PTB Braunschweig
As a specialist for shunt measurement technology, Isabellenhütte presents the first shunt-based, calibration law-compliant DC energy reference meter IEM-DCC-500 for charging infrastructure following the successful completion of the type examination. The DC meters are now available for purchase by manufacturers of charging stations and can be integrated into the designs of their applications. The basis of the type examination certification was the successfully conducted metrological measurement series (accuracy class B), the
07-15-2019 | Industry, Real Estate & Constr …
Isabellenhütte Heusler GmbH & Co. KG
New FMx shunt family: Small and low-ohmic
Isabellenhütte has developed a new range of precision resistors in standard sizes with resistances ranging from 1 to 6 mOhm for applications which require small and low-ohmic shunts. In terms of their construction, the components are also less complex than the current ISA-PLAN®resistance families. And yet, they offer the same performance quality: very good long-term stability, a low temperature coefficient, and low thermoelectric voltages. With the FMx shunt family, Isabellenhütte has
07-08-2019 | Industry, Real Estate & Constr …
Isabellenhütte Heusler GmbH & Co. KG
BAX shunt: High-performance component for electric vehicles
Electromobility is steadily gaining ground in the automotive industry, and its relevance is increasing accordingly. With the presentation of its new BAX shunt, Isabellenhütte is now taking due account of the requirements that this trend is imposing on components for high-power battery management systems. In the last year, demand for high-performance shunts for use in electric vehicles has skyrocketed. This is down to the pace of development in the electromobility sector.

07-13-2017 | Advertising, Media Consulting, …
ReportsWeb
Luxury Goods in Germany
Luxury goods enjoyed further positive growth in Germany in 2016, with volume and value sales increases seen in all nine categories covered by Publisher. The highest overall growth was seen in the rather young category of luxury portable consumer electronics, while the slowest growth was reported in the rather old-fashioned category of luxury writing instruments and stationery. Ultimately, the current value growth rate registered across luxury goods in 2016 was
06-08-2017 | Business, Economy, Finances, B …
ReportsWorldwide
Agrochemicals Market in Germany
ReportsWorldwide has announced the addition of a new report title Germany: Agrochemicals: Market Intelligence (2016-2021) to its growing collection of premium market research reports. The report “Germany: Agrochemicals: Market Intelligence (2016-2021)” provides market intelligence on the different market segments, based on type, active ingredient, formulation, crop, and pest. Market size and forecast (2016-2021) has been provided in terms of both, value (000 USD) and volume (000 KG) in the report. A
12-07-2016 | Business, Economy, Finances, B …
ReportBazzar
Packaged Food in Germany
Summary Retail value sales of packaged food continued to grow in Germany in 2016, as was the case in all years of the review period from 2011 to 2016. The last time a decline took place was in the context of the global economic and financial crisis and the following recession in 2010. In the context of the review period as a whole, the 2016 development was slightly below average, although
11-10-2016 | Health & Medicine
Industry Research
Laparoscopes Market 2016 - Stryker (USA), Henke-Sass Wolf (Germany ), Aesculap ( …
Laparoscopic surgery uses a special instrument called the laparoscope. The laparoscope is a long, slender device that is inserted into the abdomen through a small incision. It has a camera attached to it that allows the obstetrician–gynecologist (ob-gyn) to view the abdominal and pelvic organs on an electronic screen. If a problem needs to be fixed, other instruments can be used. These instruments usually are inserted through additional small incisions
11-05-2008 | Science & Education
educationconsult
MBA - Market Germany
The MBA degree is becoming increasingly more important for career opportunities of young professionals and managers in German- speaking countries. Simultaneously, there is a wide variety of MBA programs and it is strenuous to find the exact program desired. Educationconsult is glad to give you a short overview regarding the German MBA-market. Fact sheet 2009: • 72 University and 130 Universities of Applied Sciences (Fachhochschule) in Germany offer traditional Business Degrees (Diplom,
10-25-2007 | Science & Education
Sprachinstitut TREFFPUNKT
How safe is Germany?
A few weeks ago, alarmist coverage of a fight which took place during a festival in the small town of Mügeln (Saxony) was featured in newspapers throughout Germany. The incident consisted of a violent confrontation between Indians and Germans, resulting in speculation that the fight was racially motivated. Since then the question of whether Germans are racist or xenophobic has once more been the subject of vigorous discussion. However, Germany is
Comments about openPR
I can't but agree to the positive statements about your portal: easy to use, clear layout, very good search function, and quick editing!
Jens O'Brien, Borgmeier Media Communication