Pharmaceutical companies to invest at least 1bn euro in Russia 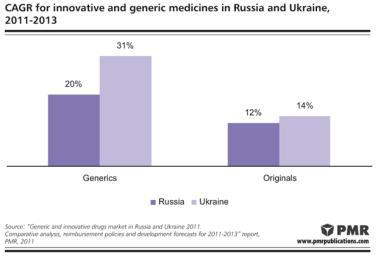 PMR: Generics in Russia and Ukraine

Because of Pharma 2020 programme regulations, designed to support local production, an increasing number of pharmaceutical companies are deciding to open their production facilities in the country. The total amount invested by pharmaceutical manufacturers in Russia could reach at least €1bn, according to estimates included in the latest report from PMR, a research and consulting company, entitled Generic and innovative drugs market in Russia and Ukraine 2011. Strong support for local drug manufacturing in RussiaIn October 2010 the Government of the Russian Federation approved the Pharma 2020 programme. Its main goal is to overcome the existing technical, scientific, technological and industrial backwardness of the domestic pharmaceutical industry and Russian medicine, to reduce dependence on raw materials from foreign suppliers and to create a technological basis for the transition of the pharmaceutical industry toward innovative models of development. Under the programme, domestic production will account for 50% of all medicines available on the Russian market in 2020, in stark contrast to the current 20-25%. Both the prime minister, Vladimir Putin, and the president, Dmitry Medvedev, have, in the course of many public speeches, emphasised that Russia aims to be become independent of foreign pharmaceutical suppliers, as such dependence is “very dangerous”. “Foreign companies which hope to capture part of the Russian pharmaceutical market should, therefore, be prepared to manufacture their products locally and to transfer their expertise to Russia” says Agnieszka Stawarska, PMR Pharmaceutical Market Analyst and the report co-author. As a result, several global pharmaceutical companies have announced plans to build factories in Russia. One of the most extensive projects announced is a Novartis production plant in St. Petersburg, the annual capacity of which is expected to reach 1.5 billion units. This represents one of the most substantial Novartis investments in local manufacturing anywhere in the world. Other foreign companies intending to invest in Russia include AstraZeneca, Novo Nordisk, Berlin-Chemie/Menarini and Krka. In total, the amount invested in drug manufacturing in Russia by foreign and domestic manufacturers in the next few years could reach at least €1bn, according to PMR calculations. Pharmaceutical markets depend on genericsIn the opinion of PMR, domestic production in Russia will focus mainly on biosimilars and high standard generic equivalents of original medicines. Large pharmaceutical companies are not particularly eager to move the manufacture of their blockbusters to Russia. The share of innovative medicines as a proportion of the market, which is quite modest in Russia (reaching, for example, only 35% in terms of value in the hospital subgroup), is not, therefore, expected to increase significantly over the next few years. In Ukraine, another pro-generic country, generic medicines are also expected to develop more rapidly than their original counterparts over the next few years, i.e. between 2011 and 2013. According to PMR estimates, the compound annual growth rate (CAGR) of generic medicines is to be 20% for Russia and 31% for Ukraine in local currency between 2011 and 2013. By way of comparison, the innovative drug subgroups will develop on average by 12% and 14% per annum respectively in the two countries. Reimbursement system to be introduced in Ukraine?There is no medicine reimbursement system for non-hospitalised patients in Ukraine. The entire financial burden of medical treatment is, therefore, borne by the patient. At the moment only certain groups of the population (for example, veterans and Chernobyl victims) are entitled to free medicines, which are purchased from the state or municipal budget. A reimbursement system similar to those of other countries might, however, be created in Ukraine in the next few years. A compulsory state health insurance system is to be implemented in accordance with the Programme of Ukrainian Economic Reforms for 2010-2014, prepared by the Committee of Economic Reforms under the auspices of the President of Ukraine, but not until mid-2014. Healthcare experts believe that the development of a reimbursement system should become part of this. The idea is not new. In 2007 the European Business Association Healthcare Committee approached government bodies and the Ukrainian parliament with the prospect of creating and developing a reimbursement system. However, the initiative prompted widespread concern and has not been implemented. If a general compulsory health insurance system is introduced in Ukraine, patients could gain access to innovative therapies through a health insurance system which they cannot afford at the moment, because of low incomes and other factors.PMR www.pmrcorporate.com is a British-American company providing market information, advice and services to international businesses interested in Central and Eastern European countries as well as other emerging markets. PMR's key areas of operation include business publications (through PMR Publications), consultancy (through PMR Consulting) and market research (through PMR Research). Being present on the market since 1995, employing highly skilled staff, offering high international standards in projects and publications, providing one of most frequently visited and top-ranked websites, PMR is one of the largest companies of its type in the region.PMR Publications ul. Dekerta 24, 30-703 Krakow, Poland tel. /48/ 12 618 90 00, fax /48/ 12 618 90 08 Contact Person: Anna Rojek, marketing@pmrcorporate.com www.pmrpublications.com