55bn euro on power projects in Poland until 2025 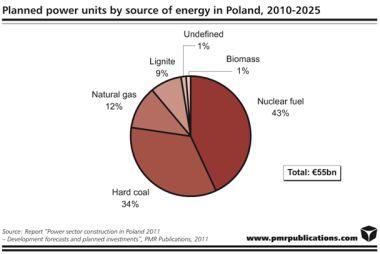 Investment projects planned by the major power enterprises in Poland provide for the development of units with a combined capacity of 30,000 MW. However, up to 50% of the projects stand a chance of being implemented. In terms of value, nuclear power units are at the helm, overtaking coal-fired units, which are losing popularity, and gas units that are rising to power. Within the renewable energy segment, biomass-fired units have gained popularity significantly, while prospects for the growth of wind farms have deteriorated.As stated in the research company PMR’s report entitled “Power sector construction in Poland 2011 – Development forecasts and planned investments”, investments in new power generating will deliver nearly 30,000 MW of capacity, while their value is estimated to be around PLN 220bn (€55bn) units until 2025. However, not all the planned projects will be implemented as it is a common practice for investors to make preparations for a larger number of projects and execute only those which are the most profitable under the given economic circumstances.Nuclear power projects represent the bulk of planned projects as they account for over 40% of the capital expenditure planned. One-third of the planned projects are hard-coal-fired units, which however gradually lose market share to gas units, which currently account for about 12% of the value of projects planned. This trend is a direct result of vague solutions in the area of carbon dioxide emissions rights and of the improvement in long-term prospects for gas supplies to Poland.The last 12 months brought a number of significant events for the Polish power engineering industry, including in particular steady progress in the preparations for the construction of several power generating units (including Opole, Turow, Ostroleka, Stalowa Wola, Jaworzno, Kozienice, Pelplin and Rybnik), continued growth of the renewable energy sector (in particular wind and biomass projects), suspension of major investment projects planned by CEZ (Skawina), RWE (Wola) and Vattenfall and the long-drawn-out changes in the shareholder structure of power groups, which can lead to postponement of some of the planned projects until the shareholder structure is clarified.According to the report’s authors, within the renewable energy sector, growth prospects for the wind energy sector have been seriously realigned as, earlier, many investors’ interest had been partly based on speculations, but that was curbed. In connection with the 2010 amendment to the Energy Law, Enea Operator and Energa Operator cancelled most applications for terms and conditions for connecting new wind farms. Additionally, reduced subsidies to ‘green’ energy will result in wind farms’ investors losing part of subsidies and ‘green’ certificates. Investors were seen to suspend new wind energy projects already at the end of 2010 in the wake of the legal changes. Moreover, according to PSE Operator, Poland is capable of accepting up to 6,000 MW of energy into its power system in 2020, which is much below the wind energy industry’s expectations. On the other hand, the use of biomass in combustion and co-combustion (with coal) processes to produce ‘green’ electricity and heat is enjoying growing popularity. Biomass has become a strong component of investment plans adopted by large power groups (such as Tauron, GDF SUEZ and Dalkia Polska) and small local CHP plants alike. Thus, next to wind energy, biomass is steadily coming to the foreground in Poland meeting the EU objectives for renewable energy.PMR www.pmrcorporate.com is a British-American company providing market information, advice and services to international businesses interested in Central and Eastern European countries as well as other emerging markets. PMR's key areas of operation include business publications (through PMR Publications), consultancy (through PMR Consulting) and market research (through PMR Research). Being present on the market since 1995, employing highly skilled staff, offering high international standards in projects and publications, providing one of most frequently visited and top-ranked websites, PMR is one of the largest companies of its type in the region.PMR Publications ul. Dekerta 24, 30-703 Krakow, Poland tel. /48/ 12 618 90 00, fax /48/ 12 618 90 08 Contact Person: Anna Rojek, marketing@pmrcorporate.com www.pmrpublications.com

06-13-2017 | Business, Economy, Finances, B …
ReportsWorldwide
Agrochemicals Market in Poland
ReportsWorldwide has announced the addition of a new report title Poland: Agrochemicals: Market Intelligence (2016-2021) to its growing collection of premium market research reports. The report “Poland: Agrochemicals: Market Intelligence (2016-2021)” provides market intelligence on the different market segments, based on type, active ingredient, formulation, crop, and pest. Market size and forecast (2016-2021) has been provided in terms of both, value (000 USD) and volume (000 KG) in the report. A
09-21-2011 | Business, Economy, Finances, B …
Poland Consulting Services
A+ ratings on Poland
Jelenia Gora/Poland, 20.09.2011 - In August 2011 two rating agencies i.e. Standard & Poor's and Moody's Investors Service affirmed their A+ rating on Poland with a stable outlook. Both agencies noted that the Polish economy is competitive and increasingly diversified. Moody's evaluated Poland as relatively well placed to withstand global turmoil with its relatively resilient economy. Both agencies stressed that the Polish economy continued to expand in 2009, in contrast
08-17-2010 | IT, New Media & Software
PMR Publications
IT market in Poland
IT providers in Poland are starting the post-crisis period in actually quite good moods and are already beginning to predict what solutions will be most sought after by their customers during prosperity. However last year hardware distributors recorded significant reduction in the number of orders placed, especially by business customers, software and IT services providers performed far better. A majority of them had similar sales as in previous periods, while some
07-07-2009 | Media & Telecommunications
PMR Publications
VoIP in Poland
At the end of 2008 the Polish VoIP telephony market was worth PLN 440m, with CaTV operators having generated the largest share of revenue in the segment. In recent years also fixed-line operators have included VoIP services into their offer. According to research and consulting company PMR Polish VoIP market continues to represent a small share of the fixed-line telecommunications market. In 2008 it accounted for approximately five percent of the
04-30-2009 | Industry, Real Estate & Constr …
PMR Publications
Construction sector in Poland
Construction companies have not been more critical in their assessment of the construction market situation in the past five years or so. Faced with a reduced number of orders, builders announce that they will seek to win new contracts mainly by offering lower prices, which may lead to a deflation in construction. The most attractive construction segments in the years to come will include road construction, sports facilities construction and
12-10-2008 | IT, New Media & Software
Central and Eastern European Outsourcing Association
CEEOA expands into Poland
Krakow, Poland – 9th December, 2008 - Today, the Central and Eastern European Outsourcing Association (CEEOA) welcomes a new member to its ranks with the addition of ASPIRE - The Association of IT and Business Process Services Companies in Poland. Established in October 2008, CEEOA aims to promote Central and Eastern European as a competitive alternative to other global offshoring destinations and to increase services delivery quality and volume under the
Comments about openPR
I can't but agree to the positive statements about your portal: easy to use, clear layout, very good search function, and quick editing!
Jens O'Brien, Borgmeier Media Communication