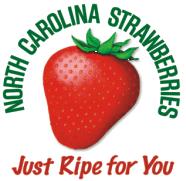 (Pittsboro, NC) – Strawberries, one of spring's first fruits to ripen, will soon be ready at nearly 200 farms across North Carolina. According to the North Carolina Strawberry Association (NCSA), this year's crop is expected to be early and plentiful.

"North Carolina strawberries handled the cold winter well this year, so we're looking forward to a good season," says Debby Wechsler, NCSA executive secretary. Reports from around the state indicate harvests in the Sandhills and Coast in early April, in the Piedmont in mid-April and in the mountain area in late April. Strawberry-picking season generally lasts from five to eight weeks, depending on the weather. May is peak season and officially regarded as Strawberry Month.

"Last year, we had some very hot weather early in the season, which brought the crop in early but hurt blossoms for the late crops," Wechsler explains. "Cool spring weather prolongs the season, while hot weather, especially in May, shuts it down." Wechsler says she'll post strawberry farm openings and updates on the NC Strawberry Facebook page as they occur.

More than just a delicious and healthy fruit, the official red berry of North Carolina plays a major role in the state economy, bringing in more than $25 million annually. "We are No. 1 in the nation among states that sell strawberries directly to consumers. People like to pick their own produce from local strawberry farms because it's a great outdoor activity for families and they know the fruit is fresh," Wechsler adds.
North Carolina Strawberry Association

In addition to supporting the state economy, produce lovers also boost their own health when consuming North Carolina strawberries. Strawberries are naturally high in Vitamin A, iron, calcium, and Vitamin C. Just one serving of fresh strawberries – one cup or about six to nine berries – contains 140 percent of the recommended daily allowance for Vitamin C with no fat, cholesterol or sodium.

Without the dedicated work of family farmers, enjoying healthy fresh strawberries wouldn't be possible. Farms in the state, including the Rudd Farm in Greensboro, North Carolina, cultivate nearly 1,600 acres of strawberries per year, according to 2009 U.S. Department of Agriculture figures.

The Rudds – dad Kenneth, mom Joan and son Matt – operate a fourth-generation family farm just off of Interstate 29. The 2009 North Carolina Strawberry Association Grower of the Year recipients expect their strawberries to start blooming soon and be ready for picking in late April.

"This year's crop looks like it could come in a little earlier than normal," says Kenneth Rudd, who converted his farm from tobacco to strawberries and tomatoes in 2005. The Rudd's strawberry operation grew from just over one acre in 2001 to 10 acres today. The influx of spring and summer visitors to a farm this size keeps Joan very busy scheduling staff at the picking fields and the on-farm roadside stand, scheduling school tours and coordinating deliveries of strawberries and produce to local businesses. Kenneth Rudd attributes this activity to an increased interest in locally grown produce. "People want to know where their food comes from," he says.

The Rudds are just a few of the many dedicated strawberry farmers in the state who work year-round to grow the fruit sold to consumers through pick-your-own operations, roadside stands, grocery stores and farmers markets. To find locations of farms as well as recipes and other strawberry-related information, visit www.ncstrawberry.com

About the North Carolina Strawberry Association

The North Carolina Strawberry Association (NCSA) is a non-profit association of farmers and others involved with strawberries working to promote strawberry production and marketing. The Southeast Strawberry Expo, the NCSA's annual conference held in November, is the leading source in the region for strawberry information, especially for plasticulture production methods.

The association works closely with the North Carolina Department of Agriculture & Consumer Services (NCDA&CS) to coordinate direct sales by strawberry growers to local school systems. The NC Strawberry Association's promotion of the 2011 harvest received support from the NCDA&CS as part of the Specialty Crop Block Grant Program.