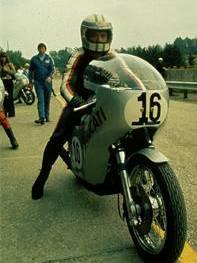 The name Paul Smart may not be familiar to modern day bike-race fans but in 1972, Paul won the prestigious Imola 200 race and put the mighty Ducati factory firmly on the path to future World Superbike success.Although that Imola race was Ducati's first V Twin Superbike success, Paul rates beating Phil Read at the Hutchinson 100 at Brands Hatch shortly afterwards, as a greater achievement.A prolific racer to Grand Prix level in the 70's, Paul Smart was often overshadowed by his brother in law – one Barry Sheene – together they created mayhem at race tracks around the world!Paul is still an active motorcyclist and Ducati Ambassador and on the 17th May this year he will be in Ross-shire to host an exclusive dinner at the Ledgowan Lodge Hotel, Achnasheen. During the evening he will be reliving - amongst others - that Imola victory and, I am sure, recollecting some of the more hilarious escapades with Barry.The following day will be a special treat for the 10 dinner guests as they will get to ride the excellent roads of the West Highlands, with this motorcycling great leading the way, before returning to the hotel for lunch.The 10 exclusive tickets will cost £185 each and include Bed and Breakfast, pre-dinner drinks, 3 course meal with wine and the post ride lunch.For more details and to book a place at this not to be missed event, contact the hotel directly on 01445 720252 or info@ledgowanlodge.co.ukEnds:Ledgowan Lodge Hotel is situated in the West Highlands of Scotland at Achanasheen. It is a small, family run, former Victorian Hunting Lodge set in stunning countryside and an ideal base for riding, driving, walking and exploring the west of ScotlandPress Service for the Ledgowan Lodge Hotel is by:Geoff Selvidge Sales & Marketing Services 18 Wavell Road Maidenhead SL6 5ADContact Geoff Selvidge

You can edit or delete your press release Ducati Race Legend Comes to Scotland... here

News-ID: 166174 • Views: 2397
Comments about openPR
I can't but agree to the positive statements about your portal: easy to use, clear layout, very good search function, and quick editing!
Jens O'Brien, Borgmeier Media Communication