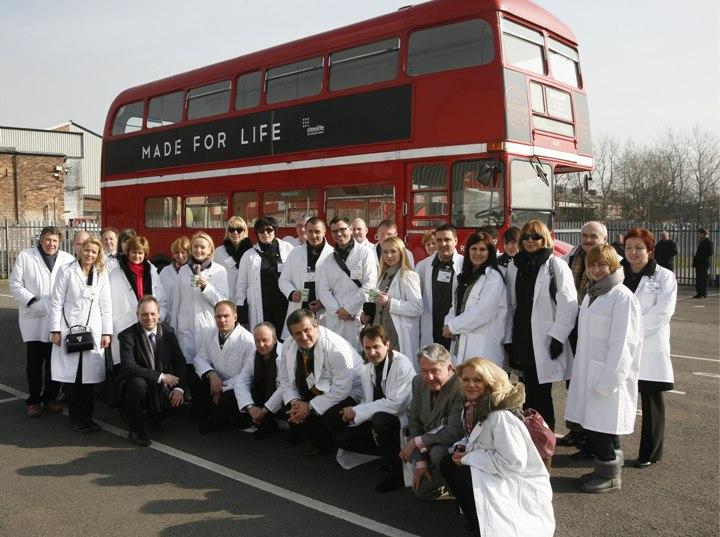 Pottery giant Steelite International is setting its sights on major new markets in Central and Eastern Europe (CEE) – with ambitions to double sales and become one of the continent’s leading hotelware suppliers.The CEE nations are Steelite’s fastest growing market with the hotel industry set to rapidly develop as nations such as Poland gear up for the 2012 soccer European Cup and Russia’s 2018 World Cup.To ensure Steelite International capitalises on these golden opportunities, the company last week welcomed 25 visitors from nine of the most influential tableware distributors from the former Eastern bloc to its state-of-the-art headquarters in Stoke-on-Trent. The guests from Russia, Poland, Bulgaria and other countries received a warm welcome to the Potteries as Steelite International, with a turnover in excess of £50million and a UK workforce of over 650, set out to impress and educate the VIP distributors.The visitors were welcomed to Steelite’s hi-tech factory where up to half a million pieces of ware are produced each week.Guests toured the factory to see how technologically advanced the company is, the exceptional quality assurance of Steelite ware with its lifetime guarantee, as well as the emphasis on inspirational design. The visitors also saw the famous Steelite ‘bus jacking’ feat – where a London double decker bus is balanced on just four Steelite mugs to demonstrate the strength and durability of the ‘Made for Life’ brand. During the visit there were also demonstrations of the work being done to minimise the environmental impact of Steelite International ware which is up to four times more durable than certain inferior-quality tableware. This means huge savings for the customer as well as four times less raw material extraction, manufacturing and transportation.Explained Steelite’s Continental Europe Sales Manager, Jonathan Shepherd: “We are already the favoured brand of international hotel chains such as Hilton and Four Seasons and we anticipate major growth across Central Europe where the lack of hotels is becoming an acute problem, because international events need to be catered for. “Examples include the European soccer Championships in 2012 in Poland and Ukraine, the soccer World Cup in Russia in 2018, the World Ice Hockey championships in Belarus in 2014 and next year’s APEC meeting in Vladivostok – to name but a few.“We have already invested heavily in developing the region: for example, literature is produced in Russian, Bulgarian and Polish and a video about the factory is currently being made in Russian. Now we have ambitious growth plans for a region which offers amazing opportunities in the coming years. “Last week’s visit is the beginning of a concerted campaign to ensure that these highly influential distributors are on board and understand the excellent quality and value that our ware represents. These distributors are key to ensuring Steelite International becomes the tableware of choice across Central and Eastern Europe.” For more information on Steelite International visit www.steelite.comSteelite International is a world-leading manufacturer and supplier of award-winning, inspirational tabletop ranges for the international hospitality industry. The company’s core chinaware products are manufactured at its factory in Stoke-on-Trent – one of the most modern and efficient tableware production units in the world.Joanne Hine Plinkfizz 8 Albion Street Hanley Stoke-on-Trent ST1 1QH