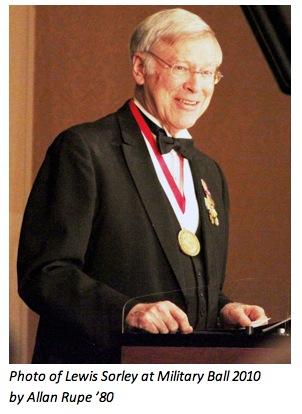 TMI congratulates retired Army Lt. Col. Lewis “Bob” Sorley III, Ph.D., ’51 for receiving a 2011 Distinguished Graduates award from the U.S. Military Academy (West Point), from which he graduated in 1956. After retirement from a distinguished military career, including service in Vietnam as executive officer of a tank battalion and on the faculty of the U.S. Army War College, Dr. Sorley was chief of the Policy and Plans Division of the Central Intelligence Agency. Having earned a Ph.D. from Johns Hopkins University, he became an award-winning author of military history, including the Pulitzer Prize-nominated A Better War: The Unexamined Victories and Final Tragedy of America’s Last Years in Vietnam, Vietnam Chronicles: The Abrams Tapes and Honor Bright: History and Origins of the West Point Honor Code and System.As a member of the Texas Military Institute Corps of Cadets, Bob won numerous military honors and served in his senior year as Battalion Adjutant with the rank of cadet captain. He received a journalism award for his work as managing editor of the school newspaper, served on the Honor Council, was a member of the debate team and played football, basketball and tennis.A loyal TMI alumnus, Dr. Sorley was guest speaker at the 2010 Military Ball. In his talk, “The Military Virtues,” he spoke of the exemplary service of Gen. Creighton Abrams and Gen. Harold K. Johnson, whose biographies he has written. “Not all of us can be as exceptional as Abrams or Harold K. Johnson… [,] but we all should try,” said Dr. Sorley. “We can take inspiration from the greatest leaders, especially those who exhibit the military virtues, and give our best efforts to trying to live lives of comparable meaning and worth.”About TMI – The Episcopal School of Texas: Founded in 1893, TMI is a private, co-educational, college-preparatory school for grades 6-12, with optional Junior ROTC and boarding programs. For information, visit www.tmi-sa.org or call 698-7171.TMI – The Episcopal School of Texas 20955 West Tejas Trail San Antonio, TX 78257