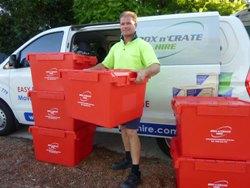 British-based reusable crate manufacturer Advanced Crates Ltd has despatched its first consignment of specialist computer transit crates to Western Australia’s Box n’ Crate Hire company. The deal is significant as reusable transit packaging (RTP) is a relatively new concept in Australia, only having been used extensively by the removals industry since 2007. Gabriele Haag-Green who heads up Box n’ Crate Hire said, “We identified the need to add a specialist IT product to our standard rental range but rather than investing a lot of capital in tooling to manufacture our own, we decided to look for a supplier. We found what we were looking for on the Advanced Crates website in the UK, the IT3 was ideal for our purposes - from there the procurement process was quick and simple. The strength in the Australian economy and favourable exchange rates only served to make a good deal even sweeter. Now we’re looking forward to taking full advantage of the growing demand for RTP in Australia now that it’s been recognised as an economical green solution by our customers.”John Mitchell, sales director at Advanced Crates and sister distribution company Pluscrates explained that the high cost of tooling is very often prohibitive for companies to manufacture their own specialist crates, especially in a developing market. “It simply doesn’t make sense for companies to commit high levels of capital for tooling unless the volumes are sufficiently high to make it viable. With a product like the IT3 that’s unlikely to be the case in a local market and it makes better economic sense to source them from a volume manufacturer like Advanced Crates and put the capital directly into stock.”Reusable Plastic Packaging was first adopted by the UK commercial relocation industry in the early 1970s and gradually replaced the traditional tea chest as the main mode of transit packaging. Crate rental quickly became a major part of the commercial moving industry and the trend has continued in parts of Europe, the USA and now Australia.Surprisingly RTP has not so far been widely adopted elsewhere in the world and corrugated cardboard has remained the packaging material of choice for most moving companies. However, with ever increasing pressure from governments around the world to reduce waste and the public’s increased awareness and demand for environmentally friendly practices the market for RTP looks set to rocket.Pluscrates Ltd. provides crate rental services to the commercial relocation, facilities management and domestic removals markets.David Jordan The Words Workshop 26 Swanwick Lane, Milton Keynes, MK10 9LD. Tel: 01908 695500 Fax: 01908 690099 mailto:david@thewordsworkshop.co.uk http://www.thewordsworkshop.co.uk All business enquiries to:John Mitchell Pluscrates Ltd. Unit 9, Towers Business Park, Carey Way, Wembley, HA9 0LQ Tel: 020 8900 0321 Fax: 0208 903 0188 mailto:JohnM@pluscrates.com http://www.pluscrates.com

09-12-2012 | Logistics & Transport
Pluscrates Ltd.
Commercial Relocation Makes Hay in Olympic Summer
The traditional summer upturn in commercial relocation saw early and unprecedented activity ahead of the London Olympics, according to John Mitchell, Managing Director of crate rental specialist, Pluscrates Ltd. “Crate rental activity is a crude but effective indicator for commercial relocation. We added close to 100,000 crates to our working stock ahead of the London Olympics and, importantly, for others in the commercial moving business who saw a similar uplift, that’s
03-13-2012 | Logistics & Transport
Pluscrates Ltd.
Pluscrates to Open New Birmingham Depot
Leading crate rental specialist Pluscrates has announced the relocation of its Nuneaton depot to new larger premises in Birmingham. Completion is due to take place on 25 February. The new 30,000 ft site will provide around 50% more storage space and allow better access to the Midlands motorway network. “We’ve seen a steady growth in business in the Midlands area during the past few years and the new depot will
10-25-2011 | Logistics & Transport
Pluscrates Ltd.
Crown Relocations Appoints Pluscrates in Exclusive Three-year Deal
Pluscrates has signed an exclusive three-year deal with Crown Relocations to supply crates throughout the UK and Ireland. The move comes following Crown’s continued growth in the commercial relocation sector. Pluscrates’ Managing Director, John Mitchell said, “Crown Worldwide Group is well known to us and we have coveted the opportunity to support Crown Relocations since we began trading in 2008. We’ve had to be patient but now we have been presented
09-12-2011 | Logistics & Transport
Pluscrates Ltd.
Whittle Group Appoints Pluscrates as Sole Supplier
Lancashire-based moving specialist Whittle Group Ltd has appointed Pluscrates as sole supplier of crate hire services for its commercial moving business. The company made the decision based on positive feedback from others in the commercial moving industry and Pluscrates’ ability to deliver high-quality products to customers throughout the United Kingdom. Pluscrates began supplying crates to Whittles in June and has seen a steady follow of orders for commercial relocations. During that time