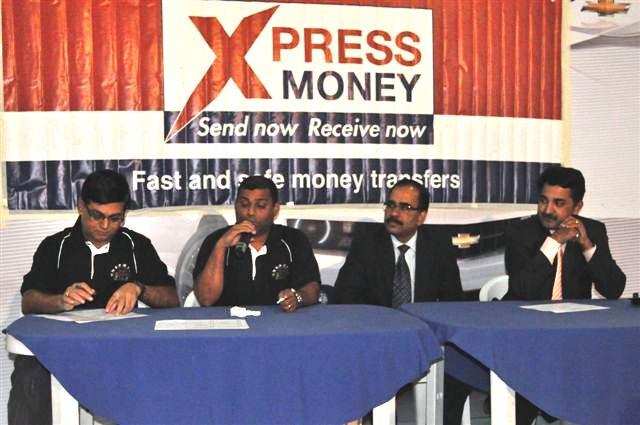 Xpress Money, the leading global instant money transfer brand, joined hands with ‎Chevrolet Insportz Club, Dubai, to launch the 4th edition of Xpress Money Indoor Cricket ‎League. This 45-day tournament will have 140 matches played in it.‎Xpress Money has always been in the forefront to support such events, which promote ‎the true spirit of culture, arts and sports. This tournament is yet another value-addition to ‎the cricket-loving customers and partners of the favourite global instant money transfer ‎brand, which brings excellent services and value through its over 60000 agent locations ‎across 95 countries.‎Speaking on the occasion, senior officials of Xpress Money said “This initiative is in line with our efforts to promote arts, culture and sports. The 4th edition of this event ‎stands testimony to the fact that we have a strong relationship with the Insportz Club, ‎Dubai. And the fact that it is being conducted in the wake of World Cup 2011 season, ‎adds to the excitement of the cricket lovers.”‎Top officials of Insportz Club said “We are pleased with the response from the teams, ‎especially with around 30% of them being new teams. We thank Xpress Money for ‎providing continued and strong support. 140 matches will be played in a period of 45 ‎days. The finals are scheduled for the 1st week of April.”‎The lively launch event was attended by officials of Xpress Money and Chevrolet ‎Insportz Club apart from special invitees and the Media.‎About Xpress MoneyXpress Money is a leading global instant money transfer brand, which has grown ‎tremendously since its inception in 1999. In just over a decade the brand has extensive ‎worldwide presence through over 60,000 agent locations across 95 countries.‎ For more information log on to www.xpressmoney.comAterta Lahcen Manager Media Relations Vision Downtown, Mezzanine Floor,‎ Old Souk, Hamdan Street Abu Dhabi, P.O Box 170‎ United Arab Emirates

06-20-2011 | Business, Economy, Finances, B …
XPRESS MONEY Services LTD
Celebrate the spirit of independence with Xpress Money
Xpress Money wishes all Filipinos across the world a very memorable and joyous independence day! In the Philippines, this is a time when the people of this proud country look back and reflect on times gone by, as well celebrate the beauty of their nation for, on the 12th of June they celebrate 49 years of independence. This strong and proud nation has achieved much greatness over the
Comments about openPR
We publish our press releases on openPR.de because we like people who are "open" - just like us.
Frank Obels, CEO, INCONET - Informationssysteme, Communication und Netzwerkberatung GmbH