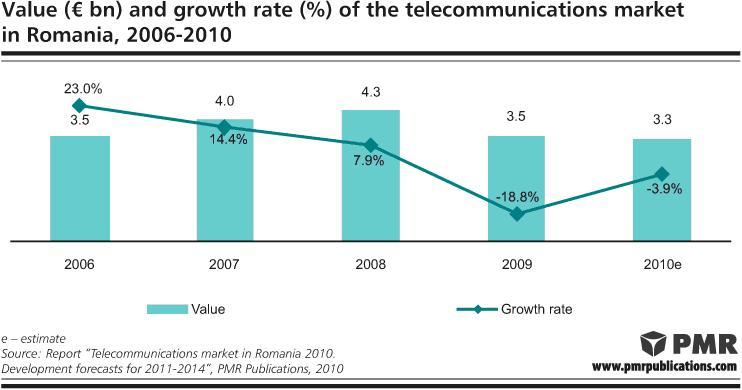 The telecommunications market in Romania is recovering after the sharp decline experienced in 2009. Although the cumulative value of revenues of telecom operators also dropped last year, the negative dynamics were not that significant. The key question now is whether the market is able to grow this year. According to preliminary data from the latest report by the research company PMR, the value of the telecommunications market in Romania decreased by 3.9% to approx. €3.3bn in 2010. Even though this was the second consecutive year the market dropped, an improvement could be seen in terms of the scale of the decline. By comparison, in 2009 the market slumped by 18.8%. It is also important to note that the rate of change is given based on the changes of the market values as measured in euros. It is significant that the Romanian leu weakened seriously against the euro during the crisis period, which significantly influenced our calculations. When calculating in the local currency, the value of the telecommunications services market in Romania decreased by 6.5% in 2009 and 4.5% last year. Over the last two years, the market witnessed the first declines after a long period of growth. What stood behind the decline was the serious cuts of mobile termination rates on the mobile market (between September 2006 and June 2010, the level of MTR of the major mobile operators in Romania declined by approx. 30%), the growing competition and decreasing prices of telecommunications services. Overall, the economic slowdown and the financial crisis caused the trend to be even more pronounced. The most significant declines were seen on the fixed-line telephony market. The Romanian telecommunications market, similarly to other Central and Eastern European countries, was deeply affected by the shift to mobile telephony services from fixed-line services. For the first time, the share of revenues of fixed-line telephony providers in the total telecommunications services market dropped below one fifth. By comparison, the share of fixed-line telephony was 26% in 2006 and over 54% in 2000.The data transmission and internet services provision market grew steadily, although its share remained low compared with the other two segments (15% in 2010). The market was also strongly influenced by steadily decreasing mobile telephony and internet services tariffs due to increasing competition. This trend has started to be counterbalanced by the non-voice offers and value-added services on the mobile telephony market. Bundled (double play, triple play or even quadruple play) services continued to gain a share of the market. Strong competition maintains a constant pressure on the prices of services, thus negatively impacting operators’ revenues. Over the last four years the ISP market in Romania has been characterised by an intense consolidating process (the acquiring of smaller ISPs or neighbourhood networks) and has been affected by acquisitions on the CaTV market (RCS & RDS and UPC Romania becoming the most important players). As a result, the number of ISPs in the country began to decrease.Forecasts for 2011 Market participants express mixed opinions about the market development in 2011. Most of them are slightly optimistic and they predict a minimal growth of the market this year. “In the short term the market will be stagnant and balancing around zero percent dynamics. The contracting national economy and the cut-backs of the business segment influenced the market in 2009-2010 – their negative outcomes will be visible also in 2011. So will be the falling disposable incomes of Romanian households and the increasing competition” – comments Pawel Olszynka, an IT&Telecoms market analyst at PMR.In report entitled ”Telecommunications market in Romania 2010. Development forecasts for 2011-2014”, PMR forecasts that in 2012-2013 the negative trend on the mobile market connected with MTR cuts will be reversed and together with the continuously increasing DLISP segment will trigger the market upwards. The mobile telephony market has a growth potential even despite the already high penetration rate of these services in Romania. On the other hand, it is hard to predict high growth rates. The number of mobile SIM cards is expected to continue to grow although the pace is not going to be significant. Market competition is also forecast to become fiercer, having a negative impact upon the revenues of the market players. However, this trend is expected to be offset to a certain extent by a shift towards content-based services. PMR also claims that there is a small chance that in the next 3-4 years MVNOs will appear in Romania. The segment with the highest growth potential is the data transmission and ISP market, which will increase by between 12-15% yearly until 2014. The main factor behind the market’s growth will be the relatively low broadband internet penetration in Romania. PMR expects the fixed broadband penetration to reach approx. 22.5% by 2014, while including mobile telephony to 40.5% over the same period.Among the services identified by the operators we canvassed as likely to experience high growth rates within the next two years are: bundled services, VoIP services for corporate clients, mobile value-added services and xDSL internet access. Mobile internet access will be the fastest developing mobile telephony service, with 3G and beyond technologies as well as the spread of smartphones being the foundation for the development of these services.PMR (www.pmrcorporate.com) is a British-American company providing market information, advice and services to international businesses interested in Central and Eastern European countries as well as other emerging markets. PMR's key areas of operation include business publications (through PMR Publications), consultancy (through PMR Consulting) and market research (through PMR Research). Being present on the market since 1995, employing highly skilled staff, offering high international standards in projects and publications, providing one of most frequently visited and top-ranked websites, PMR is one of the largest companies of its type in the region.PMR Publications ul. Dekerta 24, 30-703 Krakow, Poland tel. /48/ 12 618 90 00, fax /48/ 12 618 90 08 Contact Person: Anna Rojek, marketing@pmrcorporate.com www.pmrpublications.com

01-25-2021 | Advertising, Media Consulting, …
Ken Research Pvt Ltd
Romania Agriculture Market, Romania Agriculture Industry, Romania Agriculture Li …
Romania has an agricultural capability of roughly 14.7 million hectares, of that solely 10 million are utilized as tillable land. In November 2008, an evaluation unconcealed that 6.8 million hectares don’t seem to be used. In 2018 Romania was the third biggest agricultural producer of the EU and created the biggest quantity of maize. The most issues encountered by Romanian agriculturists are a scarcity of major investments in agriculture, owing
01-15-2019 | Advertising, Media Consulting, …
HTF Market Intelligence Consulting Pvt. Ltd.
Romania Market Overview 2019-2025: Country Intelligence Key players (Vodafone Ro …
HTF Market Intelligence released a new research report of 42 pages on title 'Romania: Country Intelligence Report' with detailed analysis, forecast and strategies. The study covers key regions that includes North America, Europe, Asia-Pacific (APAC), Middle East and Africa (MEA) or Latin America and important players such as Vodafone Romania, Telekom Romania, orange Romania, RCS&RDS (Digi), Lycamobile, UPC romania, Nextgen Request a sample report @ https://www.htfmarketreport.com/sample-report/871934-romania-country-intelligence-report Summary Romania: Country Intelligence Report "Romania:
02-05-2018 | IT, New Media & Software
MarketResearchReports.biz
Romania: Country Intelligence Report
"Romania: Country Intelligence Report", a new Country Intelligence Report by GlobalData, provides an executive-level overview of the telecommunications market in Romania today, with detailed forecasts of key indicators up to 2022. Published annually, the report provides detailed analysis of the near-term opportunities, competitive dynamics and evolution of demand by service type and technology/platform across the fixed telephony, broadband, mobile and pay-TV segments, as well as a review of key regulatory
06-13-2017 | Business, Economy, Finances, B …
ReportsWorldwide
Agrochemicals Market in Romania
ReportsWorldwide has announced the addition of a new report title Romania: Agrochemicals: Market Intelligence (2016-2021) to its growing collection of premium market research reports. The report “Romania: Agrochemicals: Market Intelligence (2016-2021)” provides market intelligence on the different market segments, based on type, active ingredient, formulation, crop, and pest. Market size and forecast (2016-2021) has been provided in terms of both, value (000 USD) and volume (000 KG) in the report. A
04-10-2017 | IT, New Media & Software
MediaSoft
Stada Romania Deploys MediaSoft CRM
Cakovec Croatia – 10 , April 2017 - After several Stada countries who run with Mediasoft CRM solutions, Stada Romania joins the club of satisfied users. Stada Romania had an very comprehensive tender on which many international Pharma CRM vendors participated but at the end Mediasoft won. The whole implementation started end of 2016 and from 1st of April 2017 Stada Romania started to use Mediasoft CRM by it’s full potential
02-09-2017 | Business, Economy, Finances, B …
ReportBazzar
Chocolate Confectionery in Romania
Chocolate confectionery continued to enjoy the perception of being a luxury product among the majority of Romanian consumers, who were affected by the adverse economic conditions. 2016 showed good economic growth, to continue the good GDP performance started in 2013. Chocolate confectionery posted positive growth rates in both volume and value terms, a reflection of the increased confidence in the economy as well as the recovery of incomes and the
Comments about openPR
9 o'clock: discuss press release with client, 10 o'clock: submit release to openPR, within the briefest possible time release is published and displayed in a prominent place on openPR.de. I am thrilled!
Zehra Spindler, Calypso Now! - Communication Agency