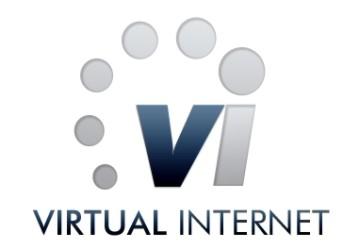 LONDON, England Feb. 14, 2011 | Virtual Internet – Virtual Internet has deployed a new cloud offering called “Pay-As-You-Go” virtual dedicated servers which allow sporadic users (or those involved in product testing) to self-service additional CPU, RAM or disk space “on-demand” at cheap hourly rates.
A key feature of the new “hour-by-hour” servers is the ability to kill a server once it has served its purpose which automatically stops further billing to the client.
For a once-off setup fee the IT Manager may provision separate hourly rates for CPU, physical memory and disk space.
Pay only for what you need including up to 16 virtual cores loaded with 500GB in bandwidth.
“Our self-metered ‘hour-by-hour’ servers are designed to be extremely flexible. Scale up or down on CPUs, Physical space and memory, as you need it, when you need it,” said Yana Kryuchkova, Marketing Manager, Virtual Internet.
“You are charged an hourly rate for each resource which can be managed independently, on-demand.”
The Pay-As-You-Go cloud servers are self-healing, cost-effective and importantly, secure. Data Centers are secured by managed firewalls, security patching and regular security audits.
New cloud servers can be fired up in minutes, if not seconds, which gives IT manager’s great flexibility in meeting unexpected short-term crises or provisioning new resources for seasonal spikes in activity.
Clients will be accessing Xen Sandbox virtualization software via the Internet “on-demand”.
Each CPU, RAM or disk space resource purchased by the client (on an hourly basis) is backed up by VI-tal Support, which operates around the clock, 365 days per year.
The customer support team is comprised of VCP qualified engineers and VSP qualified staff to handle all requests relating to the new Pay-As-You-Go servers.

Since 1996 Virtual Internet has been a pioneer in the UK colocation and dedicated hosting market offering industry-leading SLAs and 100% network uptime guarantees.
It was also the first web host to deliver both Xen and VMware (private and public) cloud servers to the UK enterprise market.
Each hosting package they sell is augmented by free VI-tal support packages that have allowed it to build strong client bases in the finance, government, education, health, media and travel sectors.
In January 2011 they reached a new milestone by becoming an ISO 9001 and ISO 27001 certified web host.